In Korea, found an ancient burial of a woman with elongated skull 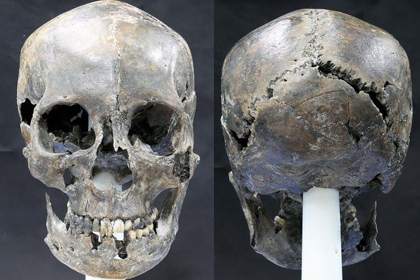 During excavations on the territory of South Korea, scientists have discovered an ancient tomb in which were buried a woman with an unusually elongated skull.

The burial belongs to the era of the Kingdom of Silla (57 BC — 935 ad). Despite the powerful influence of the Kingdom on the culture of modern Korea, scientists are very rare to come across an intact burial of the time (skeletons are poorly preserved in the local soils). However, in 2013, the archaeologists were lucky: during excavations in Gyeongju (ancient capital of Silla) in one of the tombs they have discovered the bones of a middle aged woman in perfect condition.

Analysis of carbon isotopes in the bones showed that during the life of the woman was a strict vegan in accordance with the requirements of the then popular in Korea for the Buddhist faith. Most of the calories she was getting from rice.

The fragments of the skull, scientists were able to recreate the facial features and the shape of the head of the deceased. The woman was peculiar unusual for the East of Eurasia you — when the ratio of width of head to length is 75.9 per cent and below. Scientists admit that the woman’s head specially deformed in childhood. Such rites in ancient times practiced in many regions of the world, in particular in the territory of the Confederation of Kai, and later included in the sill.

But then the archaeologists ruled out this hypothesis: when the skull is specially lengthened, this process results in flattening of the bone at the base of the skull, but the woman of the sill that was found. Thus, an elongated head formed by natural causes, but to give them a clear explanation scientists have been unable.