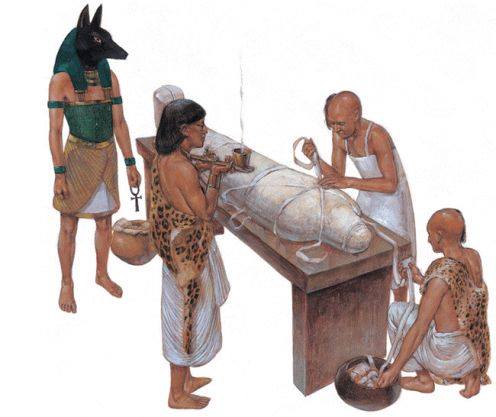 Archaeologists from the Egyptian-Spanish scientific mission discovered 56 vessels with materials for mummification during excavations in the Deir el-Bahari area in Luxor in southern Egypt.

According to the researchers, artifacts are associated with the XII dynasty of Egyptian pharaohs, to be exact, with King Amenemhet I, who ruled in 1976-1947. BC. According to archaeologists, materials for embalming belonged to the representative of the local nobility Ipi, the vizier of the pharaoh and the ruler of Thebes of that era. They were discovered during the clearing of his tomb.

In the found vessels were bandages, four meters of linen strips, kerchiefs, rolls with wide bandages, fabrics intended for wrapping various parts of the body, said the head of the Spanish mission Antonio Morales. In the same place, he said, about 300 sacks with natron salt, oils, sand and other substances were found. The most interesting items of the collection are pitchers made of Nile clay and marl (limestone). Some of them preserved cultic inscriptions, made with a hieratic letter – one of the forms of ancient Egyptian writing.

“The identification of these materials is of great importance for understanding the ancient embalming technique used in the Middle Kingdom, the study of tools and substances that were used in the mummification process,” said Mahmoud Afifi, head of the Department of Ancient Egypt of the Ministry of Antiquities.

Scientists have established that these vessels were already found during the excavations between 1921-1922 by the American Egyptologist Herbert Winlock. However, the researcher then chose not to touch them.