In Madagascar, the remains of the first giant crocodile 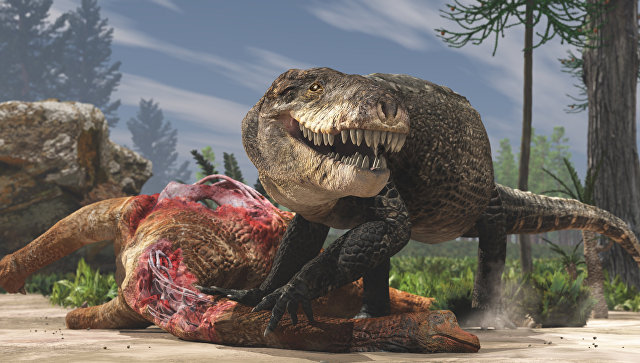 Paleontologists found on the island of Madagascar the remains of a potentially ancient giant crocodile seven to ten meters in length and weighing a tonne that lived on land and could compete with the size of teeth and the power of a bite with tyrannosaurs, according to an article published in the PeerJ magazine.

“Like many other giant crocodiles of the Jurassic period, Razana could battle and defeat many carnivorous dinosaurs, including those that were on the top of the food pyramid,” says Cristiano dal Sasso of the Natural History Museum History in Milan (Italy).

The first dinosaurs, as paleontologists think today, appeared at the end of the Triassic period, about 240 million years ago, after the disappearance of all the large animal monsters that dominated the Earth in the Permian period. The main competitors of the dinosaurs for the crown of the most successful animals on earth were crocodiles, which at that time were huge in size and inhabited not only in water bodies, but also on land.

Crocodiles and dinosaurs are close relatives whose ancestors split, as scientists believe today, in the middle of the Triassic period. As and when this happened, paleontologists do not know yet, since the fossils of this time are quite rare. For a long time, scientists believed that the first dinosaurs did not look like crocodiles, but recently paleontologists have found the remains of an alleged ancestor of all dinosaurs that look like a crocodile.

One of the last representatives of such crocodiles, able to compete with dinosaurs, could be giant lizards, whom Sasso’s distance and his colleagues call “Razan”, or Razanandrongobe sakalavae in the language of science.

The first remains of these reptiles – several teeth and part of the jaw – were found by Italian paleontologists as far back as 2006, but they were not enough to determine to which genus crocodiles belonged, what size they were and where they lived.

The search for an answer to these questions required almost a decade of additional excavations, and only a few years ago, Sasso’s distance managed to find new remains of Razanandrongobe sakalavae, including several fragments of the skull of these amazing creatures.

As it turned out, this giant crocodile had impressive dimensions – its length was about ten meters, besides, it had unusual jaws and teeth. For example, the length of each tooth was about five centimeters, and in their form they resembled the jagged fangs of tyrannosaurs and other land dinosaurs, rather than the more simple teeth of other crocodiles of antiquity and modernity. In addition, the thickness of the “waist” of this lizard was about 1.6 meters, which makes it one of the largest crocodiles throughout the history of the Earth.

Moreover, the muzzle of this creature was large, almost a meter in length, but relatively short in comparison with the elongated skulls and jaws of other large crocodiles of the Mesozoic. Such a device “person” related Razanandrongobe sakalavae not with crocodiles, but with dinosaurs, because of what scientists had to spend a lot of time to prove that he is a crocodile, and not a relative of tyrannosaurs or spinoosaurs.

According to scientists, all this indicates that Razana lived on land, rather than in water, and hunted for the same victims as large predatory dinosaurs of that time, competing with them for the title of “King of Madagascar.” The discovery of such a large land crocodile that existed on Earth at the end of the Jurassic period shows that the struggle between two groups of pangolins for domination on the planet continued almost to the very end of the dinosaur era, the authors conclude.