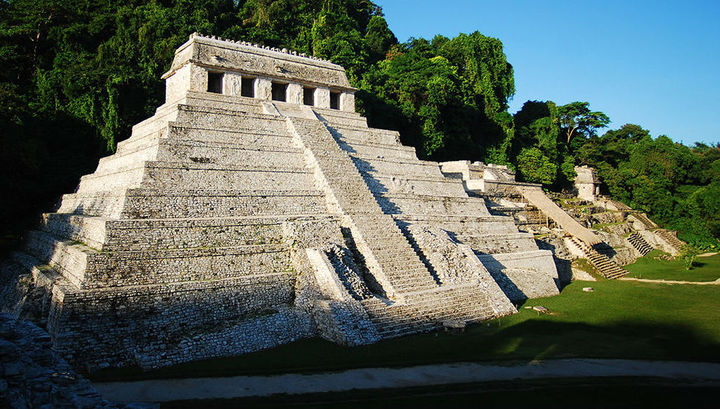 Mexican archaeologists have discovered a system of channels under the pyramid containing the tomb of an ancient ruler of the Maya. According to scientists from the National Institute of anthropology and history of Mexico, such a tunnel could represent a symbolic journey to the underworld.

“The presence of these channels is important,” says Gonzalez, Arnoldo (Arnoldo González, Professor of the National Institute of anthropology and history of Mexico.

The hydraulic system was discovered beneath the Temple of inscriptions, where the tomb of K inich Hanaab Pacal I “the Great”. The building itself was built in Palenque (the code name of the ruins of a large Mayan city in the northeast of the Mexican state of Chiapas).

The name given to the temple of the inscriptions located on the walls. Only three of the stone tiles is 617 characters. Scientists say that today I read most of them.

According to archaeologists, the inscription on the tomb says that in order to be accepted into the afterlife, the dead must be immersed in water. She “ruled” God Chuck.

The underground network of channels has different levels and several different directions. Researchers at the national Institute of anthropology believe that this underground “world” was built long before the pyramids.

Scientists who discovered the system, was convinced that water still runs along the main channel. It is assumed that its source is natural spring. But archaeologists are unable to determine the length of the tunnel and where it starts. It is to be understood in the following studies.

Gonzalez did not rule out that maybe the channels were part of a sewer or water supply system. “We also have to consider that the ancient inhabitants of Palenque were able to develop a hydraulic system for a sub playback path that would lead K inich of Janaab pakal to the waters of the underworld,” he says.

Director of archaeology of the National Institute of anthropology and history of Mexico Pedro Sanchez Nava (Pedro Sanchez Nava) said that this hypothesis has a right to exist, especially considering the findings that were made earlier in the study of the places of residence of other people in these places. So, similar water tunnel was found in the city of Teotihuacan, near Mexico city.

“In both cases, water was discovered in our time. This is a kind of allegory associated with water, which characterizes the beginning of the cycle of life and its end,” says Sanchez Nava.

The channel system was discovered using sonar or sonar.

Initially, the archaeologists thought it could be some fault line. But cameras mounted on small devices, confirmed the existence of the canal system. Currently, scientists intend to continue studying the system.