In Pakistan found the oldest traces of metallurgy 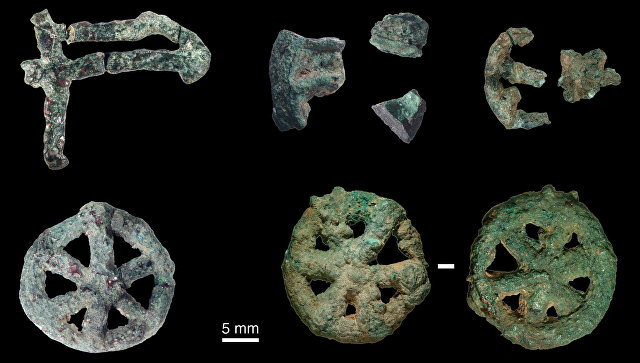 Archaeologists and metallurgists found inside one of the amulets of the bronze age, found in Pakistan, the first unequivocal evidence that humanity has mastered the secret of the forming casting is already six thousand years ago.

Humanity first met metals and realized their useful properties long enough, in the era of the primary world colonization outside Africa, about 40 thousand years ago. However, the ability to use metals to make tools and secrets of their smelting appeared much later, during the so-called Chalcolithic copper-stone age, which began approximately 7-5 thousand years ago.

It tells Mathieu Thoury from the University of Versailles in GIF-sur-Yvette (France), the first tools and ornaments, made man, was rather primitive and boxed things, more similar to stone tools than modern or medieval swords, scythes, plows, or belt buckles. Most scientists therefore believed that the advanced metallurgical techniques, such as molding, casting, appeared much later.

Turi and his colleagues found that in fact this was not the case, learning one of the most ancient examples of metallurgical art on earth – the copper amulet found in Pakistan, in the Parking lot Mehrgarh in Balochistan in 1974. This settlement is the oldest trace of a civilized society and agriculture on the Indian subcontinent, and its inhabitants are considered the progenitors of the famous and enigmatic Harappan civilization.

Scientists have long wondered how was made such amulets plaques are very similar to each other in shape and size and possessing unusually high quality for its historical period. French archaeologists have tried to find the answer to this question by connecting to the analysis of these artifacts and utilizing the methods used today in the analysis of proteins or carbon nanotubes.

As the scientists explain, the irradiation of any material with powerful laser beams leads to the fact that its atoms absorb part of the radiation energy and then gradually re-emit it at other wavelengths. The frequency of these waves when they appear, depends on the structure and composition of the molecules that have absorbed light, which allows very accurately determine the composition of the fired laser substances the spectrum of this re-radiation.

Using this technique, scientists have discovered that the wheel-like plaque of Margara contained a spider of unusual deposits of copper oxide on the inside of the spokes and rim of this copper wheel, distributed across the surface of this artifact. These compounds, as explained by physics, are the traces of contact of copper with organics, and, according to archaeologists, point to the unusual method of manufacture of this amulet.

How do you think of Turi and his colleagues, this artifact was made using revolutionary for the time methods of the so-called investment casting, an ancient technique of forming molding on Earth. Its main advantage is that it allows to produce very complex three-dimensional structures representing a single piece of metal, that is not possible with flooding of open forms of stone and clay.

A key role in this process was played by the wax, from which the ancient metallurgists sculpted jewelry model. Then they covered it with clay and obozhali the resulting structure in a furnace. All the wax was separated, and the clay was baked that turned it into a peculiar form, which is then the ancient inhabitants of Mehrgarh used for the production of the amulet, filling it with pure copper (which was also a big innovation).

Given the age of the artifacts from Mehrgarh, these plaques today are the most ancient example of forming molding on Earth. Thus, we can say that Pakistan is home to advanced metallurgy. Scientists believe that further metallurgical traditions and the secrets of Margara spread across the Middle East, giving birth to the whole culture of making extraordinarily beautiful Eastern metal jewelry with a very complex form.