In Rostov-on-don found a wall of ancient fortress 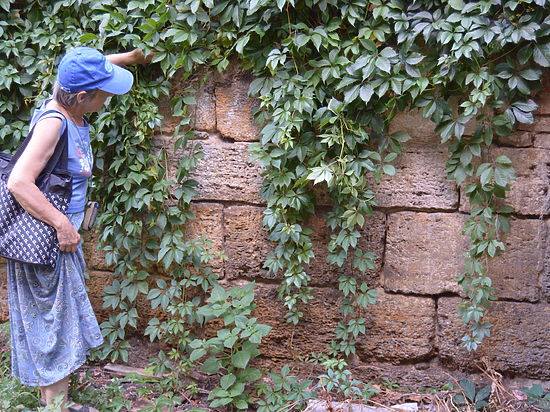 The ancient masonry found in the ruins of the old barn. That Rostov need city Museum, conversations go not the first year. The placement offers a variety of, but none of the projects were never implemented. And so last week we asked residents of the house on the lane Krylovsky, 40, with a very interesting and very real offer.

— We have in the yard was an old farm building, in other words, wood sheds, says activist Lyudmila Lisovenko. In may of this year, we held a General house meeting at which they decided that in order to fire safety, these barns need to be demolished. Raised money and expense, dismantled buildings. And when removed, discovered that they belonged to a very old wall, clearly not XX and not even the nineteenth century.

To the findings the inhabitants of the invited experts. Chairman of the Board of the Rostov regional branch of all-Russian society of protection of monuments of history and culture Alexander Kozhin scientist, geologist Boris Talpa stated that this wall was built in the same period as the fortress of Dmitry of Rostov.

As an expert we have invited well-known local historian and architect Love Voloshinova. The wall was taller than a man (pictured). It stretches along the perimeter of the yard and looks pretty sturdy. On one of the sections of the wall in thickets of plants, local residents discovered the remains of the gatehouse lattice window. A Lodge of wood, so not as well preserved as the wall.

— When we all saw it, he asked the engineer and he advised on their own any work not carried out, because the earth can crawl, and wall — collapse — says Lyudmila Lisovenko. —Previously, there was a farm building, they had dug a cellar, and the land is left a cavity that can affect the stability of the wall. Therefore, we would like to invite competent experts, those who would lead it all up and helped us to create a Museum.

The fact that the wall extends not only in the yard on Krylov, 40, but goes to the next yard on the street Socialist, 134. There is the house of the last century, which is now for sale. It is small, but for the municipal Museum of the fortress of St. Dmitry of Rostov would be at the time. The building could accommodate the exhibition, and in the courtyard visitors can see fragments of real buildings, located on the territory of the fortress, and even touch with their hands.

Idea that offer the residents quite robust, commented on what he saw the Love of Voloshinov. — This building does not require a large financial investment, to put in order and strengthened the walls are also quite possible. It is close to the archaeological laboratory. Working in it, archaeologists had the idea to create a tourist route dedicated to the fortress of Dmitry of Rostov. Because in this area the walls are still there*. They could be combined into a single ensemble, and would make a great tour.
The house on Krylovsky, 40, was built in 1910. Here was located an apartment house and preserved the exterior wrought-iron staircases and decorative elements of the last century. On the first floor were two rooms uninhabitable, because they have no sanitation. However, in recent years there has settled tenants who themselves have set themselves a bathroom and a toilet, and since then, the basement was flooded, and the old building began to crumble.

— We repeatedly addressed the authorities on this question, but the answer is no. A family that instilled here, you need to relocate to another habitable place, the house must be repaired, and in these rooms on the ground floor it is possible to make the office tour Desk or room of the Museum curator as an activist. — Because in our yard happily coexist two historical eras! If the municipality has no money for the improvement of this area, we agree to organize and folk Museum. We will refer to funds, leaving the people’s cry that every helped can. The main thing — that we were allowed to do and the feasible help.

— Rostov is not enough of small museums. I was recently in a Midland of Russia, and there is the calico Museum, Museum of samovar, Museum of the boot. They do not require big territories and capital investments, and there is always a lot. We have about the Museum of the city talking for quite some time. And there are ideas, absolutely divorced from life. Here were talking about the fact that Moscow, 72, will be the Museum of Rostov. Talked, promised, and the reality is that the house alarm, the wooden floor, cracked. Of course, make it all fast and cheap will not work. Or the Museum of Wrangel — so much has been said about it in public and nothing. And here all in the mind — a quarter of which can be an unusual and very interesting complex. It remains only to convince the authorities that this is a real project, which the city.
Lyudmila Lisovenko promised that she wont leave. And her next step will be a March to the offices of the officials. A “MK the don” will monitor developments.

*PS While we were talking with the activists, one of the residents was advised to look into the backyard of the house on Chekhov street, 34. There is also the recently found an unusual wall. We came to this place, and it turned out that the fragments of buildings really is. Moreover, the large stones that lined the garden in the courtyard, also apparently from the remnants of the buildings of the fortress of St. Dmitry of Rostov. This confirms once again that the idea of the Museum complex is unfounded. 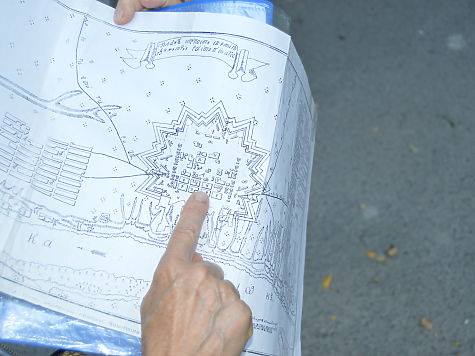 Boris Talpa, candidate of geological-mineralogical Sciences, the owner of a unique collection of bricks:

— The bricks that form the wall in the lane Krylovsky, 40, was placed on one of the first industrial enterprises of Rostov — on brick factory established in Kiziterinka for the construction of the fortress of Dmitry of Rostov. This is about the 1770-ies. Initially, this area was built from limestone that was mined on the right Bank of the don. The instances of such constructions can be seen on the embankment, near Paramonov warehouses.

When formed Nakhichevan-on-don, has underscored the Armenian producers of bricks, and product quality were very high. Therefore, their bricks have been preserved to this day.

Looked like the fortress of St. Demetrius of Rostov

The border fortress of St. Dmitry of Rostov was held between the modern streets of Stanislavsky and Gorky, and delineates the lane of the Serf and the street Chekhov.

The fortress of St. Dmitry of Rostov was built according to the highest decree of Empress Catherine II in 1761 under the leadership of engineer Alexander Rigelman. This was a huge fortification object, the total length of the front of the fortifications was 3.5 kilometers. The Fort was star-shaped in plan and consisted of nine redoubts, surrounded by a moat and ravelins, United by eight. In the ramparts were two gates — the West and the East.

Near the fortress there were two suburb (settlement) — Soldiers and Dolomanovskiy, located on the banks of the don within the boundaries of the current lane Dolomanovski to Voroshilovsky Avenue.

The whole area of the fortress surrounded by earthen ramparts, were filled inside the various buildings — the gunpowder, artillery and Commissariat depots, barracks and military hospitals, officers ‘ houses and the houses of artisans and merchants, etc. All these buildings were erected of brick and soft white stone which was taken here at a steep, steep banks of the don. This stone, however, mostly went to the booth and basement.

After 70 years, Russia pushed the frontier borders to the South, the fortress ceased to have military importance, and the city was constantly growing, not enough space for residential and commercial buildings. Gradually the garrison buildings were dilapidated, the townspeople dismantled them for their needs. In 1845 was established the Ordinance on the connection of the fortress from the town and allocating on its territory 500 land plots under residential buildings. Already by the mid-nineteenth century many walls were destroyed.