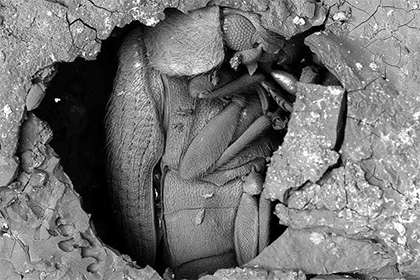 Scientists have found that in the tombs of ancient Egypt “preserved” not only the mummy: the loaf of bread, which is put in the grave, found the bodies of beetles grain grinders.

Coolness, dryness, and isolation of Egyptian tombs significantly slowed the natural processes of decomposition and activity of microbes. Mummies, wood coffins, and even the bread retains its appearance for centuries.

For examination of the loaves age of 3000-3500 years that were left buried for sustenance in the afterlife, Caroline Cartwright (Caroline Cartwright) from the British Museum and her colleagues used a scanning electron microscope.

It turned out that the bread the ancient Egyptians often made from inedible by today’s standards ingredients — chaff and straw. However, in other loaves (barley and wheat), the Egyptians added fruit. The scientists also found numerous larvae and the bodies of adult insects grain grinders.

In April 2016, scientists have found the oldest image of the demons of Ancient Egypt: it turned out that already four thousand years ago, a terrible mythological creatures have been part of the art of this civilization.