In the Altai found a sewing needle, which is more than 50 thousand years 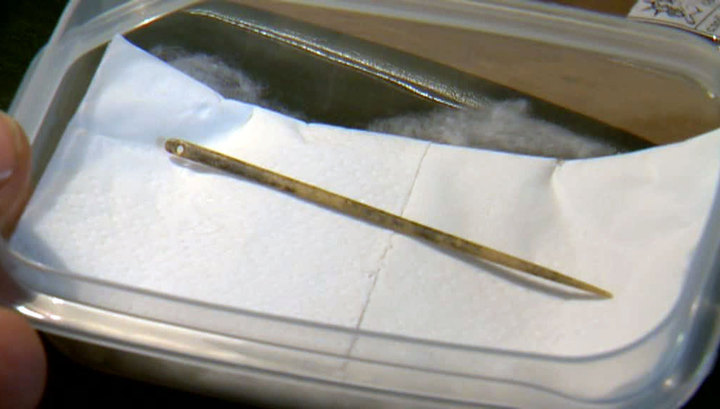 In the Altai found a sewing needle, which is more than 50 thousand years. Perhaps, the most ancient in the world, found by archaeologists. A needle made from the bones of birds and, interestingly, it is still sharp. The discovery refutes the theory that sew the clothes of ancient people taught immigrants from Europe. The first tailors could be residents of the Altai.

Here we see the size – 6 inches 7 millimeters. Interestingly, these needles were found in Denisova cave? However, according to experts, analogues of this needle size no. It is the longest needle.

The age of the needle – according to experts – approximately 50 thousand years. Perhaps, the most ancient in the world, found by archaeologists. Made from the bones of a large bird. Still quite sharp, and, most importantly, with clear, round hole for the thread. This eye of the needle drilled the people who lived in Altai, Denisova cave.

According to scientists, we know exactly how old this cave is about three hundred thousand years. People there appeared about two hundred thousand years ago. Studies in the ancient cave are held for a quarter century. The whole earth, clay, stones, archaeologists carefully, using special tools, crossed to the other side of the mountain river, in the lab. All excavated twenty-two geological layers. A few meters of the earthen walls keep the history of hundreds of thousands of years.

Bone needle found in the 11th geological layer. Just at this period fifty thousand years ago — is changing human behavior. He begins to wear jewelry. The evidence of this bracelet, found in a cave a few years ago. Even then, at the dawn of humanity, the Altai people were sewing their clothing of skins, can drilling, cutting, sharpening.

For a long time it was believed that these skills are in Siberia was brought by immigrants from Europe, forcing lived here neandertalci. However, several years ago archaeologists found in the cave a fragment of a pin of ancient man. Genetic analysis showed that it was representative of a separate branch of humanity – the Altai people or Denisovskoe people, as scientists call it.

Judging by the DNA analysis, we can say that these people were the genes that were responsible for dark skin and dark hair. And while that’s all, — said Maxim Kozlikin – Junior researcher of the Institute of archaeology and Ethnography SB RAS.

According to ancient legend Denisova cave was named after the hermit — Dionysius, who lived in it at the end of the 18th century. Its length is little more than a hundred meters, but a lot of voids extending deep into the rock depths.

These walls are old stone walls, and the South-Eastern wall is filled with loose sediments. And what is behind them archaeologists don’t know yet, so there will long be studied.

For scientists Denisova cave is unique. On the one hand, it is located on a gentle slope close to the river, so in ancient times the people lived. On the other hand, the structure of the cave there are several wells in a karst traps. Thanks to them, stone tools, arrowheads, jewelry, well preserved. And discovered this year bone needle, which was used 50 thousand years ago, certainly not the last discovery.