In the Altai mountains, found a 1,500-year-old mummy in Adidas sneakers 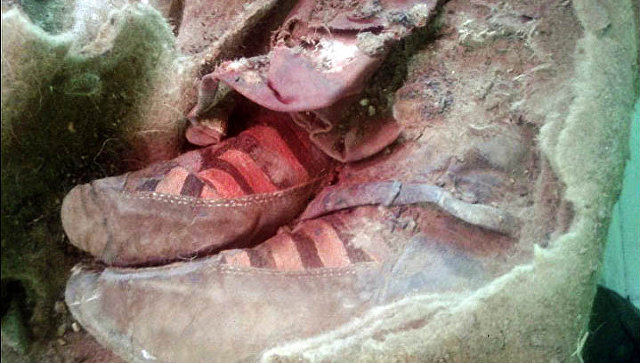 Archaeologists have discovered in the Altai mountains, the mummified body of a woman shoes like Adidas sneakers, said the representative of the Mongolian Khovd Museum.

According to him, the mummy is estimated at fifteen hundred years, the burial was done at an altitude of over 2800 meters, so the mummy is very well preserved.

On the feet of the women were shoes, very similar to snowboard boots Adidas. Near the body there were other items – a variety of utensils, clothing, check, RAM’s head, bones of other animals, — said the representative of the Museum.

After photos of the mummy appeared on the Internet, users have come to the conclusion that the dead woman could be a time traveler.

People think that the mummy age of 1,5 thousand years, which is Adidas is proof of time travel, written by one of the users of the community.

According to archaeologists, this is the first intact burial of Turkic, found in Mongolia. The identity of the remains of the woman have not been identified anatomically. Currently, scientists are studying the mummy, after the conclusions of the experts mummified body will be placed in one of the expositions of the Museum of Khovd.