In the Arctic Circle traces of an unknown civilization are found 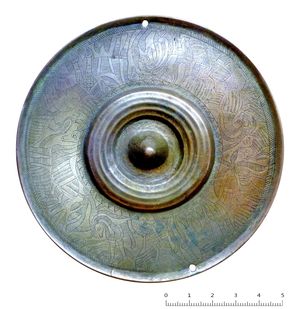 In the lower reaches of the Ob River in the region of the mouth of the Kazym River a treasure was found with unique objects, analogues of which are unknown, and archaeologists have only found their prototypes only several times in women’s burials of the V-III c. BC. In the Altai, the Upper Ob region and the Southern Urals. Kazymsky treasure contained several round cast bronze disks, very similar to the reverse side of gilded rattles, which were produced in the VI-III century. BC. In India and were supplied to the modern territories of the Southern Urals, Altai and the south of the Novosibirsk region.

Mirrors were completely round and consisted of two parts – the back (relief) and the anterior – smooth, found to mirror. Between these bronze disks were connected by seven accurate rivets, and inside the master were placed pieces of tin or lead, which were pleasantly rattled. In Siberia, in the Altai, the Urals, there were found only 6 mirrors-rattles. In India itself and in other countries there is not one yet. On the cult character of these rare products says a number of facts – their finding only in women’s burials, their location (at the head face to the ground), finally, the fact that when robbing in ancient graves, these mirrors have never been taken, they are not even Touched. Apparently, they terrified the ancient robbers. Probably, such mirrors belonged only to servants of the cult – priestesses.

The first mirror-rattle was found in the Pazyryk burial mound in the Altai by the famous scientist Sergei Ivanovich Rudenko in 1947 and is now in the Hermitage. The nature of the images and the way they are arranged does not allow scientists to doubt that these things were produced in India or Bactria and had a purely cult character. From there in the V-III centuries. BC. They came to the nomads of the Altai Mountains, the Upper Ob and the South Urals. And from the end of III and in the II. BC, in a similar way fell to the north, to hunters of the middle and lower Ob, solid-cast, so-called Sarmatian mirrors, which were made in India and in the Near East. As studies have shown, the “gilding” of the mirror-rattles of the master was made without the use of gold. Bright golden brilliance was achieved by a special technology of grinding.

Scenes on the back of the rattles mirrors were portrayed by priestesses with their arms raised, surrounded by lotuses and cult animals – a good Indian elephant, deer, or antelope. The center of the disk was invariably adorned with a hollow cone – the top of the World. Around the central ledge, skillful masters forged the convex hollow hexagonal ridges, separating different worlds from each other. Mirror rattles could be an attribute of the priestesses who served the cult of the World Mountain, located in the North, and the mirrors themselves were a voluminous model of the country of the blessed (hyperboreans), located around the World Mountain behind the ring unapproachable ridge of the Ripeye Mountains – an outer cushion.

The ornament was arranged symmetrically between the rollers, but without complete similarity. All images were decorated with solar signs – the symbols of the sun, which meant that all the participants in the scene belonged to the celibates. Many of the above techniques were borrowed in the manufacture of disks, which were found in the found treasure. However, they are already made in the traditions of another culture, previously unknown and in the scientific literature has not yet been described.

“The disks practically copy the back of the rattles, but they do not have any marks of rivets, holes, loops or hooks,” said Petr Shulga, a senior researcher at the Institute of Archeology and Ethnography. – Disks with a cone, as well as mirrors, rattles, could be interpreted in the Indo-Iranian environment as a scheme of the universe, similar to the voluminous Buddhist mandala. At nomads of Altai and Southern Urals Mountains in V-III centuries. BC. E. Culture was different, but beliefs persisted. Two rough holes in the discs were punched out later: apparently, the ancient northern hunters, who did not have such ideas about the universe, used these disks in a more utilitarian way: as a belt buckle.

Despite the external identity with the back side of the rattles mirrors, the bronze discs found, unlike their prototypes, were cast, not forged, and the engraving on them was engraved rather than minted. This, according to the scientist, speaks about what their other masters did and at a little later. The very nature of the images has changed. On the disks of Kazym’s treasure, the drawing is not symmetrical, but in a circle. One of them, for example, depicts wedding scenes of mythical horned horses with branched tails. First the battle of the stallions for the mare, then the reunion of the pair near the flower-altar and, finally, the final scene of the love of two stallions and mares. On another disk mythical horses resemble heads of birds of prey, and on the third – waterfowl. The artistic style in which these images are performed is not described in the literature. 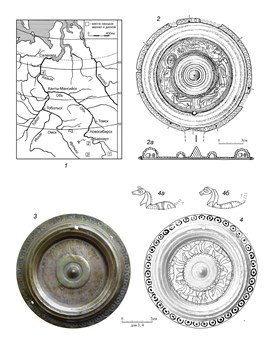 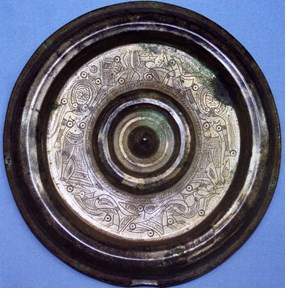 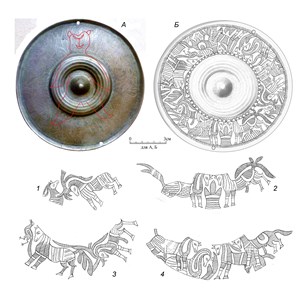 – These discs could be produced starting from the middle of the III century. BC. E. In the forefront of Asian craft centers, who copied Indian rattles, but already in their tradition, – believes Peter Shulga. – And in the II-I centuries. BC. E. The peculiar relief of the discs with cones and rollers was already perceived by the culture of the population of the Lower Ob and then was reproduced for several centuries on various plates and buckles. This is indicated by the remaining disks of the same Kazimsky treasure – they are practically without ornamentation, they repeat only the original form of their prototypes, but with a bias towards the Siberian style – instead of a chain of solar signs on the edge, one can see a common corolla, as if from beads. Round bronze belt buckles with bears’ heads from the 1st century. BC. On the III-V century. AD Were widely distributed in the northern territories and described in detail in the scientific literature. However, after research Kazymskogo treasure reasonably arises the idea that in this way the borrowed Indian culture was transformed and let the local roots.

Summarizing the unique find, the scientist stressed that the disks from the Kazym’s treasure allow one to follow the amazing vitality of the voluminous scheme of the Aryan universe: with a central cone surrounded by ridges and mythical scenes. It seems that the cult of the world mountain in the V-III centuries. BC. E. Was spread over a vast territory from India to the Altai Mountains, the Upper Ob and the South Urals. But in the III century. BC. E. On this whole territory there is a global change of cultures and the image of the World Mountain, surrounded by a ring ridge, completely disappears in the mirror-rattles.

“Substantial changes are taking place in India and in the Near East after the conquests of Alexander the Great and the formation of Hellenic states in the space to India and the north of Afghanistan,” explains Pyotr Shulga. – By the beginning of the III century. BC. E. Mirror-rattles cease to produce. But in other workshops, perhaps in the Hellenic environment, they are being copied in accordance with other traditions, making completely non-functional discs. Finding them in the Kazymsky deposit shows that, like mirrors, these disks were also in demand on a vast territory, apparently including the forest-steppe of Western Siberia, where by the III century BC, BC. E. Formed a culture of Sargat. However, no such disks were found on the territory or their copies. All the more surprising is that their rich set is found in a single place near the polar circle itself.