In the Japanese chronicles, mention was made of ancient mega-flashes on the Sun. 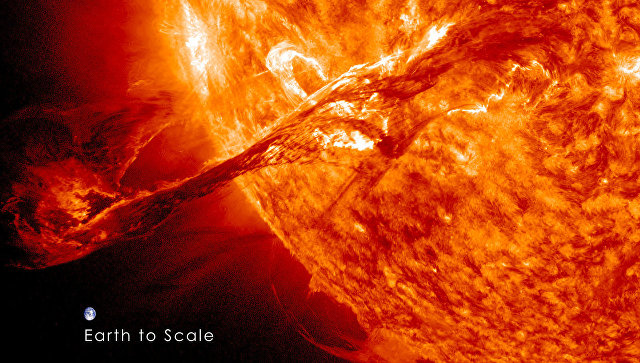 Mentioning unusually bright “northern lights” in medieval Japanese and Chinese chronicles helped scientists learn about a series of powerful solar flares in the 11th and 12th centuries, traces of which were “imprinted” in tree rings, an article published in the journal Space Weather said.

“We found in these chronicles ten cases when the sky over China or Japan several nights illuminated the aurora borealis.In the rings of trees that formed in those years when these flares occurred, the share of” heavy “carbon-14 is lowered, indicating a high level Solar activity, “says historian Hisashi Hayakawa from the University of Kyoto, Japan.

On the Sun there are periodic flashes – explosive energy release in the form of light, heat and X-ray radiation. Powerful flashes “pierce” the magnetic shield of the Earth. They disrupt the operation of radio communication systems, satellites and threaten the health of cosmonauts working for the ISS. For example, the outbreak on the Sun in March 1989 deprived Canada of a large part of its electricity networks, causing damage of $ 13.2 million.

It is believed that the most powerful outbreak occurred in 1859 during the so-called “Carrington event”. Then about 10 jottojoules (10 to 25 degrees) of energy were released, which is 20 times more than during the fall of a meteorite that destroyed dinosaurs and marine reptiles. According to NASA forecasts, the probability of recurrence of such an event today is about 12%.

For this reason, historians, astronomers and physicists are actively trying to find traces of other mega-flares in the fossil and written history of the Earth that would help us to determine how often such events occur and what consequences to expect from them.

Japanese physicists and historians have learned at once about several powerful flares of this type, studying two medieval chronicles – the Japanese Meigetsuki and the Chinese Songshi. The first is a diary led by the court poet Fujiwara Teika, who lived in the 12th and 13th centuries, and the second is the history of the Song dynasty that ruled China in the 10th and 13th centuries.

Studying these chronicles, Hayakawa and his colleagues came across a reference to the unusual “red couple”, complex figures and radiance in the heavens that Teika and his Chinese contemporaries saw February 21-23, 1204. This shine, according to Sunshi, was preceded by the appearance of a particularly large sunspot. A similar “polar light” in the middle latitudes, as noted by scientists, was seen by eyewitnesses of the Carrington event.

These descriptions interested the scientists. They completely analyzed the texts of the chronicles and found in them two hundred similar cases, about ten of which were suspiciously repeated in 27 days (one rotation of the Sun around its axis). All these outbreaks occurred during the supposed maximum of solar activity in the 11th and 12th centuries, which forced physicists who joined the Hayakawa team to look for their tracks in the real world.

In the past, Japanese scientists have already found traces of supernovae and gamma-ray bursts in the annual rings of the ancient cedars that grew on the territory of the “empire of the rising sun” in the 8th-12th centuries of our era. Based on similar considerations, the researchers compared the contents of the rings that emerged during the times of these outbreaks to neighboring layers of wood, and found that the activity of the Sun in those years was indeed extremely high.

Many of these outbreaks, as scientists say, were generated by the same spots on the Sun: they were repeated with the same frequency with which the Sun makes one revolution around its axis. Other outbreaks, lasting five days or more, were probably spawned by several almost simultaneous coronal discharges to the Sun.

As Hayakawa and his colleagues note, they failed to find any trends in the frequency of large spots and powerful flares, except for their connection with the solar maximum, which generally indicates the random nature of their appearance. Further study of outbreaks, scientists hope, will help to understand how often such events occurred in the early history of mankind, and whether we can expect them to return when the Sun once again reaches the peak of activity.