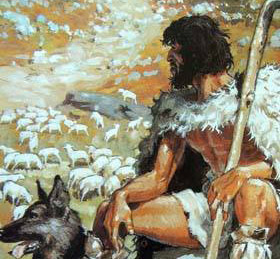 Archaeologists from the UK, USA, Denmark and Armenia headed by the Armenian anthropologist and geneticist Levon Ter-Episkoposyan, visited the caves near the village of Azokh in Nagorno-Karabakh Republic and found 7000-year-old human tooth.

It is noted that due to the climatic characteristics of the cave, the tooth is preserved in very good condition, which allowed us to conduct DNA analysis at the Department of genetics, University of Copenhagen, Denmark.

The results of the analysis showed that the DNA of the tooth coincides with the genetics of modern Armenians.

Yepikosyan noted that they came to this conclusion after numerous excavations in the territory of NKR, where he inspected more than ten caves, including the cave of Azokh.

“Here we found the tooth of a man who lived on the territory of Karabakh, about 7000 years ago. DNA may be readily maintained in the teeth for a very long time. In the result, it was found that genes of our ancestors coincide with the genes of today’s Armenians,” said yepikosyan.

It is emphasized that the Azokh cave complex is a unique place, which preserved the organic remains of different periods of history.

Excavations in Azokh began in 2002 by a group led by scientist Tanya ray from the Museum of the city of Blanford. The group had found numerous bones and remains of mammals in these giant caves.

Archaeologists also found evidence that this place was home to three different types of apes.