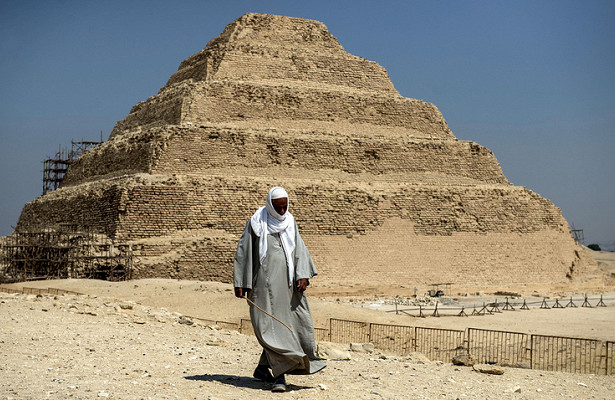 A group of Egyptian specialists carrying out restoration work on the stepped pyramid of Djoser discovered a unique bronze statue of the ancient Egyptian god Osiris. During the reign of the pharaohs, he was revered as the god of regeneration, the king of the other world and the judge of souls who had departed into another world.

Mustafa Waziri, Secretary General of the Council of the Egyptian Ministry of Antiquities, told reporters that “the figure of a powerful deity was found during the restoration of parts of the western wall of the Djoser pyramid, located in the archaeological area of ​​Sakkara, several dozen kilometers south of the modern capital of Egypt, Cairo.” It was in a hiding place, which was built thousands of years ago between two giant blocks that make up the foundation of the structure, almost on the very surface of the pyramid. This cache, however, for many centuries and was not seen. Only now, by freeing hollow spaces between blocks from rubble, sand and archeological rubbish, scientists have discovered a hidden statuette.

Egyptologists believe that the figure of Osiris was placed “in a secluded place” by one of the priests of the ancient temple, located near the pyramid. Apparently, in this way the minister intended to strengthen his connection with the other world, attracting for this purpose a “double force” – Pharaoh, who was considered to be the divine incarnation on earth, and Osiris himself.

The detected figurine is in very good condition. It was created, according to archaeologists, in the late period of the reign of the dynasties of the pharaohs. Its height is just over 60 cm. Osiris is depicted standing, in his hands he holds a heket and neheha (scepter and chain) – symbols of royal power in ancient Egypt. As noted by Waziri, the artifact was delivered to a special repair shop at the research center in Saqqara, where it will be thoroughly studied and necessary restoration work.

The six-step pyramid of Djoser in Sakkara is the most ancient of the grandiose stone buildings that have survived to the present day in the world. It was built around 2650 BC as the funerary temple of the family of the first pharaoh of the III Dynasty of the Ancient Kingdom of Joser. At present, the length and width of the pyramid at its base are 121 m and 109 m, height – 61 m. The stepped pyramid in Sakkara is considered the forerunner of all smooth Egyptian pyramids erected in subsequent centuries in Ancient Egypt, including three pyramids on the Giza plateau – Cheops, Chefren and Mikkerin.