Imagine that one night you look at the sky and find there two moons or look in the afternoon and see two suns. Scientists believe that this happened in about 3600 BC. e.

The astrophysicist Mayank Wahia and his colleagues at the Tata Institute for Basic Research believe that the rock carvings found in Kashmir are the oldest image of a supernova and probably the oldest star chart ever created by man. The painting shows two bright objects in the sky, under which are figures of animals and people. A study on the discovery was published in the Indian Journal of the History of Science.

Having established the age of the image, Vahiya decided to find out why someone drew two bright objects in the sky. It could not have been two suns, because the sun, as we know, we only have one.

It could not be the Sun and the Moon, because although both objects can be seen in the sky at the same time, a full Moon can never be so close to the sun. (From the Earth, we see the moon as complete when it is on the opposite side of the planet from the Sun.) The only remaining explanation, according to Wahia, is a supernova that could compete in brightness with the Moon. 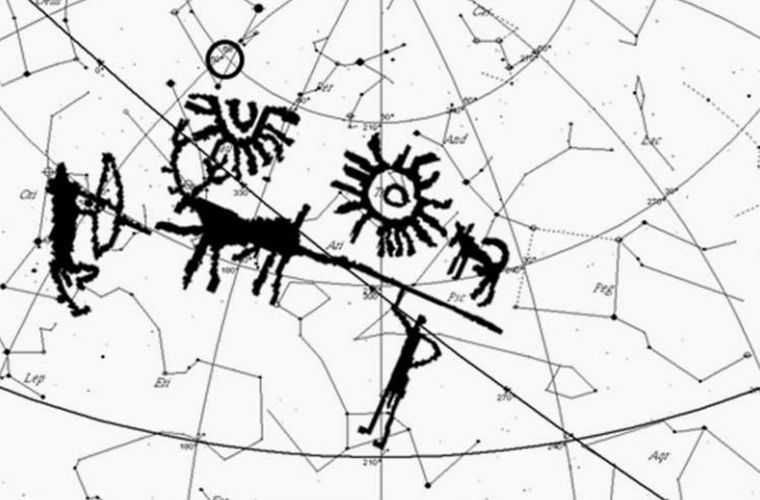 Of course, this explanation is meaningful only if in fact there was a supernova, bright enough to be visible from the Earth in the specified period of time. The good news was that Wahia had a way to accurately identify many supernovae over the past thousand years.

When a supernova explodes, it releases a lot of energy. Visible light is only a small part of what an explosion produces. The supernova continues to emit X-rays of high intensity for thousands of years. Astronomers were able to track these supernova remnants and calculate when it happened and how large-scale was the astronomical event.

With all the restrictions set, the database gave Vahiya only one option: the supernova HB9. It seems that it has all the necessary characteristics. Its explosion was seen on Earth around 3600 BC. e. During its explosion, it would seem to Earthmen a luminous ball – although not quite round – and slightly less bright than the full moon (because it was only about 2600 light-years away).

According to the scientist, if you look closely at a work of art, you can see that the figures under the conditional supernova and the moon are not part of the hunting scene, as it may seem at first glance. The scientist draws attention to the fact that the images correspond quite exactly to the constellations surrounding the supernova: a man with a bow and arrow on the left – Orion, a deer – Taurus, the person on the right holding a spear is a part of Pisces, and the dog is the Andromeda galaxy. In other words, rock art is probably an atlas of the starry sky, and, if so, this is the oldest map of the starry sky in history.

True, there is one problem. Wahia has studied many more of the rock art of the region, but could not find any other maps of the starry sky. Although our rock carvings are well suited to how the sky could look at that time, it may just be a coincidence. To prove the opposite, Wahia needs a second example. If people in the region once drew a star map, they must have painted it many more times for other kinds of astronomical events (such as comet flight, meteor showers). But while there is no evidence, Vahiya believes that the ancient artist was an ancient astronomer.