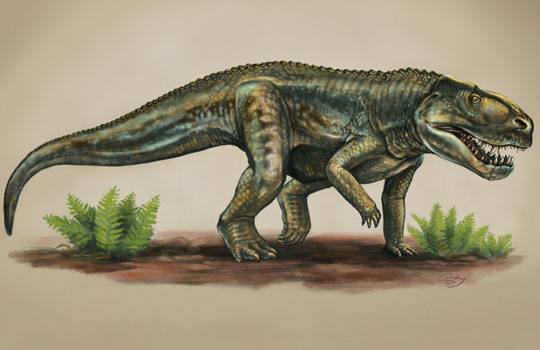 A group of paleontologists, Virginia Polytechnic Institute Vivaron described krokodilopodobnyh the remains of a giant creature terrorizing the surrounding area of new Mexico in the late Triassic, about 212 million years ago.

This animal, belonging to a rare group Rauisuchia, was an ecological analogue of the later carnivorous dinosaurs-the theropod and the niche of dominant predator. Until recently, scientists knew only five members of rauisuchia found on different continents

Fossils of ancient monster found in 2009 in the quarry near the town of Ghost Ranch expedition led by Sterling Nesbitt Sterling Nesbitt), who was then a graduate student at the University of Texas at Austin and now works as a Professor of Geology in Virginia. Reptile bones were so fragile that to take them to the lab had pre-Gulf special plastic.

A new animal has received the name Vivaron haydeni. Generic name he came up with the Virginia Tech graduate student Emily Lessner (Lessner Emily she is the lead author of the study. According to her, the so-called big snake, with a length of over 10 meters, caught in the vicinity of the finds of fossils of more than 100 years ago. The species name immortalized John Hayden, who opened to science careers near new Mexico in 2002.

Vivaron haydeni was a large four-footed archosaurs, looks a bit like a crocodile. Its length was 4-6 meters, and powerful jaws and strong claws presented a serious danger to others.