In the US, the most complete skeleton of tyrannosaurus 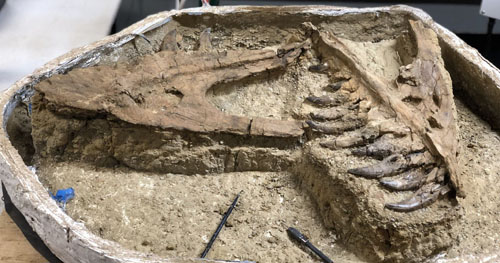 A team of researchers discovered in Montana the most complete skeleton of a young dinosaur from all that was ever found. Paleontologists from the University of Kansas have unearthed unique remains in the area of ​​Herr Creek, famous for its abundance of fossils.

The T-Rex skeleton was found in surprisingly good condition, and even the frightening 5-centimeter teeth of the young dinosaur were in full. Despite its age, the predatory reptile already reached a length of about 5 meters and, apparently, a day added in weight from 400 to 1300 grams. Kyle Atkins-Weltman, one of the assistants who helped out on excavations, in an interview with Live Science, told us that by the time he was four, T-Rex already outnumbered the largest predators that inhabit the Earth in our days.

Archaeologists are still working to extract the remains of a dinosaur from a rock massif. They have already managed to restore the upper jaw with teeth, a fragment of the leg, the thigh, the spine and part of the skull. Over the past hundred years in this area were found as many as five fossil remains of tyrannosaurs, but the new skeleton has survived so well that scientists assess their luck as “one chance out of a hundred million”