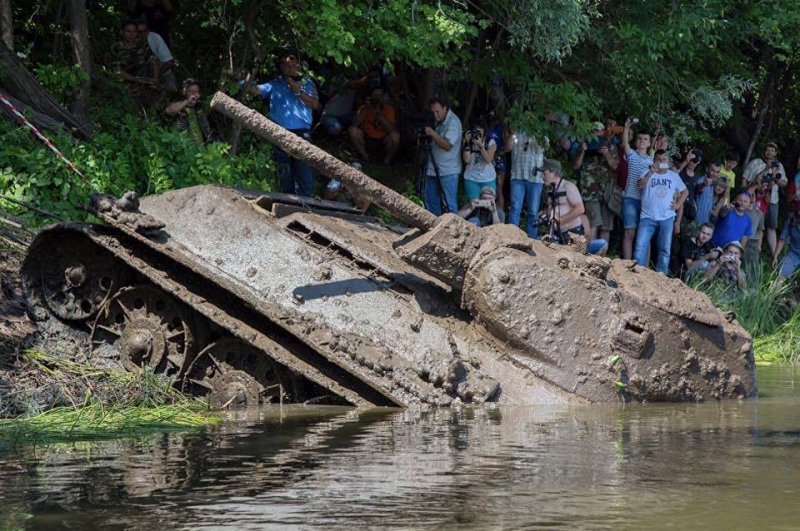 Unique tank T-34-76 of the great Patriotic war, raised from the river don on July 14 at the village Buylovka in Podgorensky district of Voronezh region.

This is the only fully preserved example of this modification of T-34 from a few hundred of these machines, manufactured at the Stalingrad tractor factory and directly from plants going into combat units is reported on the website of the Moscow Park “Patriot”, which experts and found this tank in the course of search operations in April 2016.

In addition, the operation to raise the 30-ton machine was attended by servicemen of the Western military district and divers. Eventually the tank, more than half a century had lain at the bottom of the river, stretched out from seven-meter depth to the shore via an armored repair and recovery vehicle BREM-1.

No ammunition, no remains of the battle tank in the car is not found, marks RIA “Voronezh”. In the future the tank will be the showpiece in the Park “Patriot”, located in the village of Alabino in Moscow region.

Previously it was thought that all these tanks were destroyed during the fighting in the first years of the war. There are different opinions about how this T-34-76 were at the bottom of the don.

According to the locals, during the retreat of the troops of the red army flooded the tank, so it has not got to the enemy. However, against this version says that with the tank not removed weapons, said the head of search, repair and restoration of exhibits of the Park “Patriot” Anatoly Kalemberg.

Researchers tend to another version the tank was transported on a pontoon bridge and he fell into the river. This is supported by the fact that near the tank at the bottom are the sunken pontoons, vehicles, and small boats. According to Kalemberg, this tank is likely lost in the summer of 1942.