In the Voronezh region of Russia found the barrows, of which 3.5 thousand years 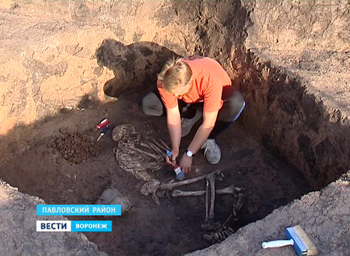 The Pavlovsk district, archaeologists have found burial mounds, of which 3.5 thousand years. In one burial complex buried the representatives of two different archaeological cultures. Presumably the graves date back to the 14-15 century BC. On future highway bypass is Losevo archaeological expedition of the work that is on the initiative of the Federal road Agency.

On this site of the future bypass road excavations were coming to an end. Excavator with stress levels a ground.

According to archeologist Valeria Berezutsky, because of this heavy soil the artifacts and skeletons have been preserved better than usual. Hence, the work of anthropologists will be more. Now these finds are waiting for the capital’s scientists asked to provide them for research fragments, and whole skeletons. And yet the main for archaeologists work is a fixation, a sketch of each burial. Here, one of the most unusual inside the tomb the skeleton of a baby. 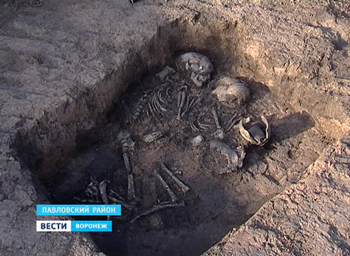 Sergey Cartoon, researcher of the research center of history and archeology of the Crimea:

“The burial is very interesting, because, you see, it as though consists of an adult and a child, we don’t often see come across in this culture are burials. And it is interesting. Interestingly, two of the vessel. As a rule, one vessel, in these graves, there are two and one of them with unusual ornament”.

On this mound there are 4 burial ground. And here you can see the intertwining of two different eras. In one burial complex – the burial of the middle and late bronze age. The difference Abashevskaya and carcass culture for scholars is obvious. Various shapes and ornaments, clay vessels, the position of the buried. On a relatively small area of the burial ground was found more than 20 graves.

The work of archaeologists will continue until frost. Only in the area of future alignment detected 11 objects of cultural heritage. But it means, 7 barrows have yet to research scientists.