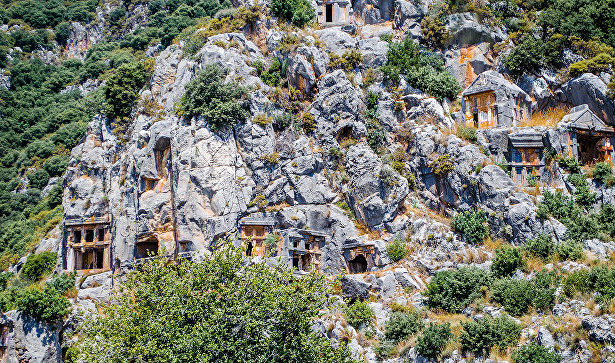 A resident of the city of Demre in the Turkish province of Antalya, Nuri Bilgich, discovered the rocky tomb of the Lycian type at the depth of about four meters while working on the arrangement of his garden.

It is noted that the staff of the museum of Lycian civilizations, who were invited to the site of the find, found out that the tomb was built in the fourth century BC. The two-story structure 5 meters high belongs to the same era as the rock tombs located near the ancient city of the World, popular among tourists in Antalya tourists. It is assumed that the tomb was looted in antiquity and flooded as a result of the exit from the banks of the river Demre.

Representatives of the museum reported that excavations around the tomb will continue, as there is a suggestion that there are other tombs in the area. According to Bilgich, he fulfilled his civic duty, stopping construction work and placing the gendarmerie in the know about the historical find.

Lykia – an ancient country in the south of Asia Minor, was located on the territory of the modern Turkish provinces of Antalya and Mugla.

During the first millennium BC. e. was distinguished by an original culture: language, writing, architecture. It was conquered successively by the Persians, Alexander the Great, the Romans and the Turks. Long maintained the autonomy, entering into the composition of ancient empires.