In Turkey found an ancient tomb 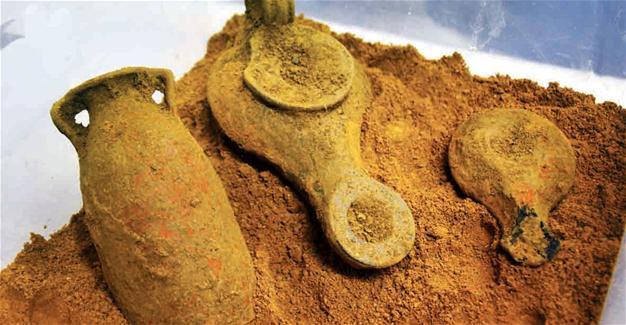 The burial chamber of the age of about 2,400 years has been discovered on a construction site in Milas Turkish province of Mugla, located in the South-West of the country. A team of archaeologists found the burial chamber 103 of the artifact, belonging to the Hellenistic and Roman eras.

Archaeologists headed by the Director of the Museum of archaeology and Milas found 103 artifacts untouched for millennia, burial chamber, which is believed to belonged to a local wealthy family.

The Director of the Museum of Milas Savran Gulnaz said that the burial chamber was unearthed near the sacred way between the city of Milas, which was the capital of ancient Caria, and religious center of Labranda.

According to Savran, the settlement has existed on this site in over 2600 years, and its place subsequently arose the city of Milas.

We were told that at the construction site found a marble tomb. Upon arrival, we saw that the grave destroyed. We started digging and realized that a new burial chamber. Then we discovered that the camera was never sacked, and it was just happiness, ‘ said Savran, adding that the Museum continues excavations in many places in the city.

The excavations yielded a rich collection of artifacts from the burial chamber, said the archaeologist.

As the camera has never been opened and looted all the artifacts has been preserved intact to this day. Taking into account the detailed craftsmanship, which made architectural structure, this burial chamber clearly belonged to an important family who lived in the period of Hekaton, whose members used it for several centuries, said Savran.

According to archaeologists, the scientists found in the cell six skeletons of people buried in the burning. The scientists also found a child’s grave in the tomb. In addition, discovered a unique artifact, a necklace of bones, the likes of which have never before been in that region.

As told Savran, a team of archaeologists found 103 artifact in the burial chamber, belonging to the Hellenistic and Roman eras.

Among the findings – clay lamps, ritual bowls, offerings to the dead, utensils, toiletries, and many gold threads, – said Savran.