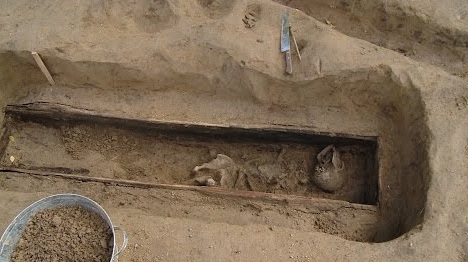 Vologda detachment North Russian archeological expedition headed by archaeologist AUK “Vologdarestavratsya” Igor Kukushkin in the study of cultural layers of medieval Vologda were found in the excavation in the street Drummers… a coffin with human remains.

“One day I was approached by a woman. She informed us that lived until the mid-1990s, years in the now demolished wooden house on the site where today we are digging. Vologzhanka has stated that the building constantly there were some mysterious events, heard strange noises, moving objects, like someone’s soul can’t rest. It all stopped after the priest made in the house of prayer. A few hours after the visit of the women we encountered in the ground for disposal,” – said Igor Kukushkin.

According to Igor Polievktovich, single graves in the city are very, very rare. The cemetery existed at temples. Street Drummers 2-4 earlier burial. Although, according to historical data in Grozny era somewhere near that excavation site stood the Church of St. Basil the Great.

An archaeologist dates the emergence of the tomb of the XVI-XVIII centuries. More clearly the date will be set after the clearing of the burial. However, now we can safely say that here lies a man whose growth was 160-165 centimeters, said researcher Vologda Museum-reserve, an anthropologist Tatyana Panteleeva.

Igor Kukushkin said that after examination of the grave the remains of Vologzhanin will be reburied in an Orthodox ceremony in one of the mass graves at Gorbachev cemetery. That is what all medieval burials during previous archaeological work at the Vologda settlement.