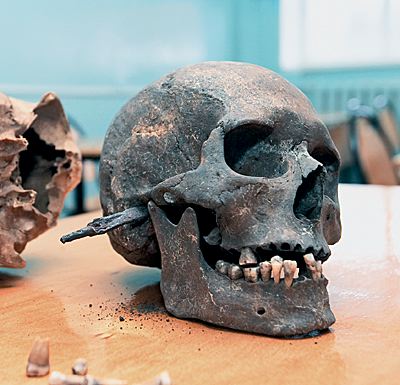 Penza archeologists found unique decoration on the Zolotarevsky settlement. According to experts, they managed to stumble upon a treasure trove. Such unique hryvnia meet in Russia on the Lower don and the Volga. But there is a neck decoration — a rare stroke of luck.

In place of Zolotarevsky settlement — in the distant past economic center and defensive line — this is found only separate fragments of such hryvnia.

An important factor was the fact that this torque — albeit the most important, but only part of the treasure. A few hours earlier archeologists found a sword with a length of about 90 centimetres, as well as beads, clasps and buckles.

“When they began to clean up the walls, one of them found a groove, and there — hidden jewelry and weapons. In these things we can say that it is somewhere in XI century. Most likely, the treasure was hidden before the destruction of the settlement,” explained the Professor, archaeologist Gennady Belorybkin.

Where scientists expected to find the Palace was a military barracks. This is another discovery expedition 2016. In just a many years history students, volunteers and scientists have made kilos of the earth, examined about 700 square meters of the ancient monument.

But the main problem remains the same: to dig up and find, notice historians, means to simultaneously destroy. The finds are in museums, and the land in which they were found, remains overgrown with grass. Archaeologists from it have nothing to wait for.