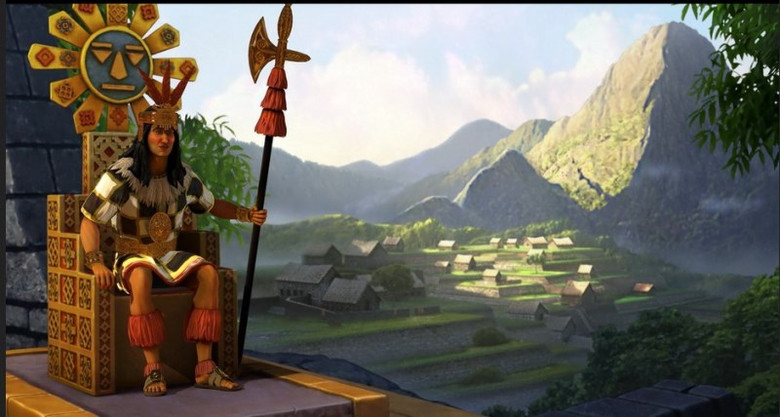 The largest state the New world — the Inca state lasted a little more than 300 years. And the Imperial period when the Incas conquered almost the entire Western part of the South American continent, lasted even less — only about 80 years.

But for such a short time, the Incas and their subordinate peoples have created a huge number of unique wealth. It seems incredible that literally from nothing, from a scattering of tribes led to one of the great empires of antiquity, stretching as a narrow strip along the Eastern coast of South America for 4,000 km from the Pacific coast to the plateau in the Andes located at 4,000 meters altitude.

The Incas, who did not know in those days, any wheels, or iron, erected the giant structure. Had created exquisite works of art, the finest fabrics, left a lot of gold jewelry. Got the crops on the mountain heights, where nature is always hostile to the husbandman.

Most of the heritage of the Incas, as they themselves were destroyed by the Spaniards. But the monuments of monumental architecture to ruin completely failed. And extant specimens of ancient architecture not only admired, but also give the researchers a number of almost intractable issues.

The second southern expedition of conquistadors under the leadership of Francisco Pizarro into the unknown continent turned out to be very successful for the Spaniards. After going through the wild jungle in search of new prey in front of them at the beginning of 1528, had brought a large stone city with beautiful palaces and temples, spacious ports, with richly dressed people.

It was one of the cities of the Incas — Tumbes. Particularly struck by the conquistadors stretching widely between well-tended fields wide, stone-paved road. 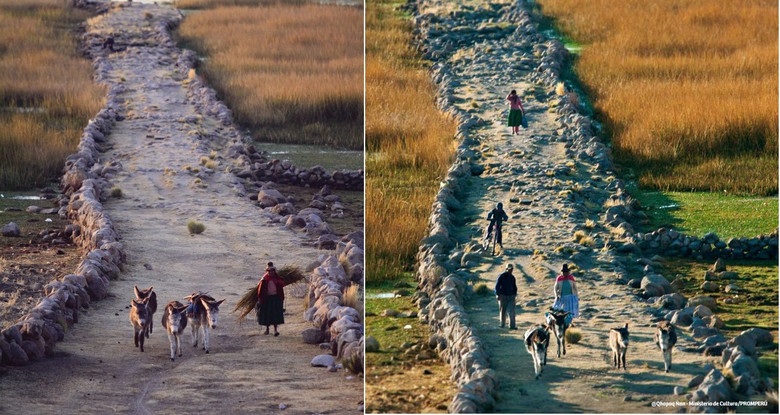 The territory occupied by the “sons of the Sun”, as the Incas called themselves, consisted of four parts, which formed the basis of the administrative division of the state and its official name is Tawantinsuyu, which meant “four interconnected sides of the world”.

These four provinces were associated with one another and all together with the capital — the city of Cuzco the road systems. Spaces that are serviced Inca roads, was truly immense — about 1 million km2, or put together the territory of present Peru, a large part of Colombia and Ecuador, almost all of Bolivia, Northern Chile and North-Western region of Argentina. About 30 thousand km is the total length of roads Tawantinsuyu, preserved to this day. 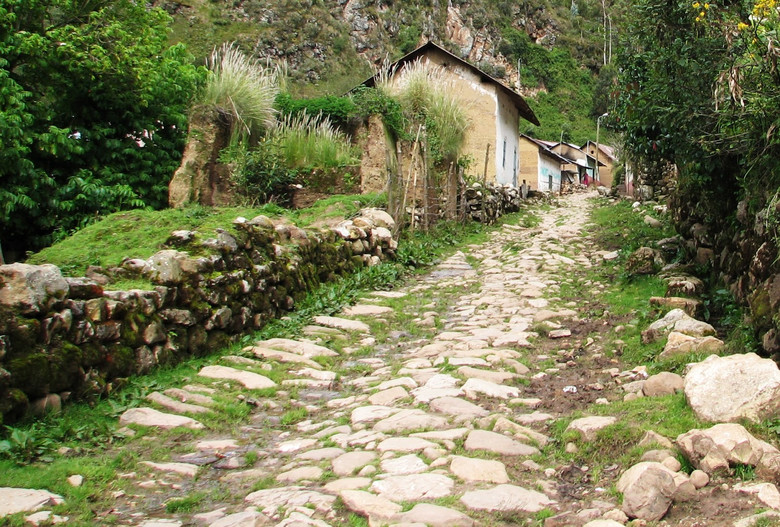 Preserved better than other parts of the road, with a length of 6000 km on the territory of six countries, was introduced in 2014 in the world heritage list.

The basis of the road network “sons of the Sun” were the two dominant backbones. The oldest of them called Stupid Nyan, or Royal road. It began in Colombia, crossed the Andes mountain range, passing through Cuzco, go around at an altitude of almost 4000 m of lake Titicaca and rushed into Chile.

The historian of the XVI century, Pedro de Sousa Leona can, in particular, to read about this way: “I believe that since the beginning of mankind has there been such an example of the grandeur, as on this road that passes through deep valleys, majestic mountains, snowy heights, over waterfalls, through rock and scree around the edge of the monstrous chasms”.

Another chronicler of the time wrote: “…one of the most remarkable structures in the world, recounted by the ancient authors, were not created with such effort and cost, as these roads”.

The second main road of the Empire — it is for her to Cuzco moving the first groups of conquistadors — stretched coastal valleys to a distance of 4000 km. Starting from the most Northern port city of Tumbes, she crossed a semi-desert territory Costa, was along the coast of the Pacific up to Chile, where he closed the king’s road.

This highway was named Huayna COPAC-Nyan in honor of the Supreme Inca, who completed its construction shortly before the conquest — the conquest of the “enlightened Europeans” the country Tawantinsuyu. 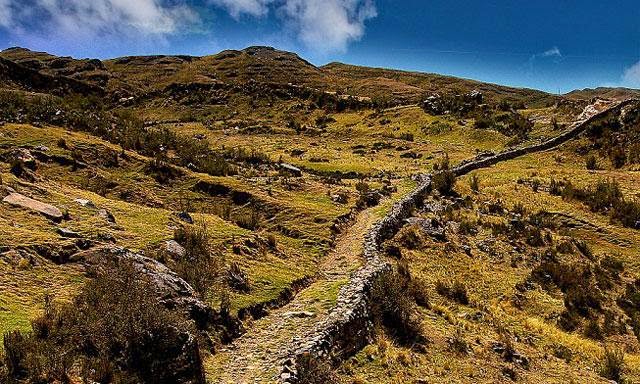 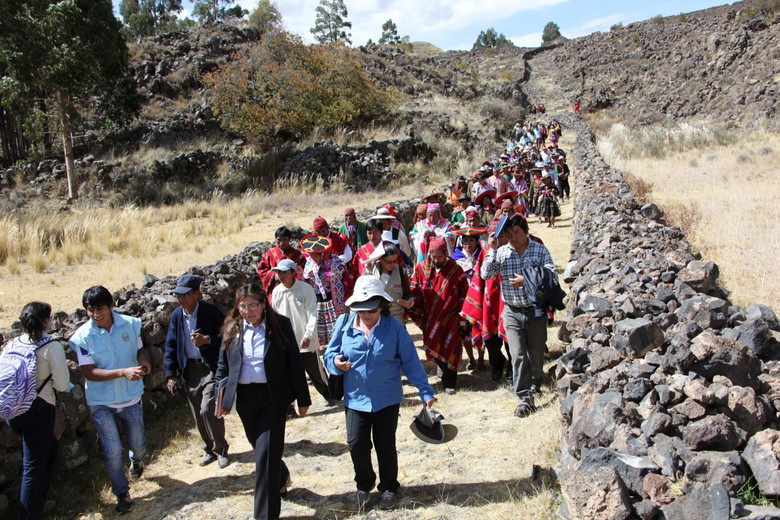 The main highway of the Inca Empire was Stupid Nyan connecting through the mountains North and South of the Empire and was considered the beginning of our century the longest highway in the world. If it is located on the European continent, she would have crossed from the Atlantic to Siberia. These two major thoroughfares, in turn, linked to each other by a network of secondary roads, of which discovered the remains of only eleven.

The most striking thing is, that the great highway was intended exclusively for pedestrians and pack animals. Unique line was created by the Incas, who did not know the wheel and used to transport relatively small pack animals llamas or carrying goods for yourself.

The only vehicle served as a manual stretcher, on which was entitled to only the Supreme Inca, the members of the Royal family and some notable persons and officials. Lama was intended exclusively for the carriage of goods.

“Kilometer zero” all roads drevnepersidskih was in Cuzco — the “Rome” of the Inca, on the Central sacred square. This symbol of the center of the country, called Capac UPDF, was a stone slab, on which the most important religious ceremonies sat Supreme Inca.

Intentional damage of roads, bridges unequivocally interpreted by the laws of the Incas as an enemy action, a heinous crime deserving the most severe punishment. Immutable was the so-called Mita — labor service: to every subject of the Empire was supposed to work 90 days a year on public construction projects, primarily the construction of roads, streets, bridges. At this time the state fully took care of food, clothing, shelter recruited workers, often forced to serve the mit away from home. 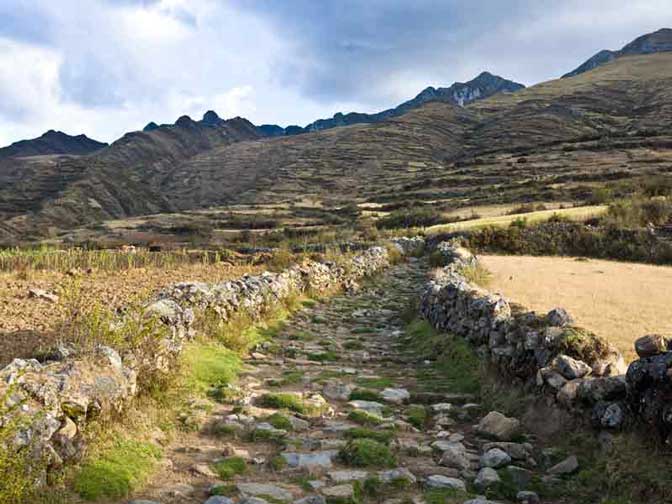 The impressive success of the Inca road it is possible to explain the meticulous, downright fanatical carry out all the duties and artfully established government mechanism. Although built roads using the most primitive tools, the integrity of the work determined “traffic miracle” created “sons of the Sun”. The road builders of Tiahuanaco were not stopped in front of mountain ranges, viscous swamps, scorching deserts, each time finding the optimal technical solution.

At a dizzying height from the gigantic peaks (at mount Salcantay road Huayna COPAC is at the level of 5150 m above sea level) provides a prolonged steep gradients. Among wetland marshes drevnerusskie engineers raised the way, pouring for the dam or the dam.

In the Sands of the coastal desert inky welted their roads on two sides of the stone meter bumpers that protected the road from the sandy drifts, and helped soldiers ‘ ranks to keep the alignment. How looked the road of the Incas in the valleys, it helps to know the medieval chronicle:

“…at one and the other side was a wall more than a good growth, and this road was clean and was under planted in rows trees, and these trees from many sides fell on the road, their branches full of fruit.”

People who traveled on the roads of the Empire Tawantinsuyu, could relax, eat and spend the night at located every 25 km of road stations, or Tambo, where there was a coaching Inn and warehouses with supplies. For the maintenance and supply of Tambo was watched by the inhabitants of nearby villages-aylem. 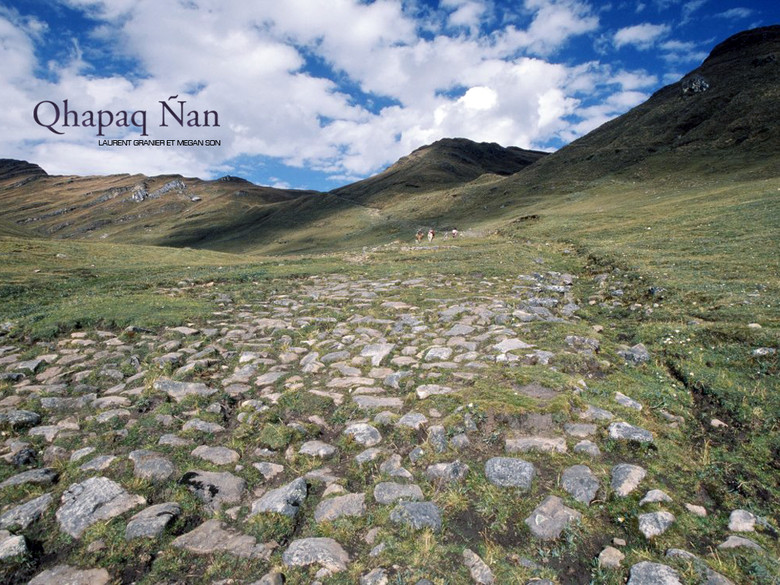 “Sons of the Sun” was the construction of underground utilities. The confirmation of the secret passage, connecting the capital city with the fortress MUAC-mark — sort of like the military rate, head of state, is located in the mountains above Cusco.

This underground winding road consisted of several moves similar to a labyrinth. Such a complex and unusual structure was created in case of invasion of the enemy. At the slightest threat to the rulers of Tawantinsuyu, along with the Treasury freely fell into an impregnable fortress, and the enemies, even if they managed to enter the tunnel, likely to wander, lost and hopeless wandering. The exact route of the maze was a closely guarded secret, which owned only the Supreme rulers of Tawantinsuyu.

The cult of the road played in the lives of the Incas, a role that corresponds to their fanatical piety. Each such ceremonial road had its architectural uniqueness. Capacocha — “coronation road” — led to the outskirts of Cusco, to the mountain Cuchicancha. 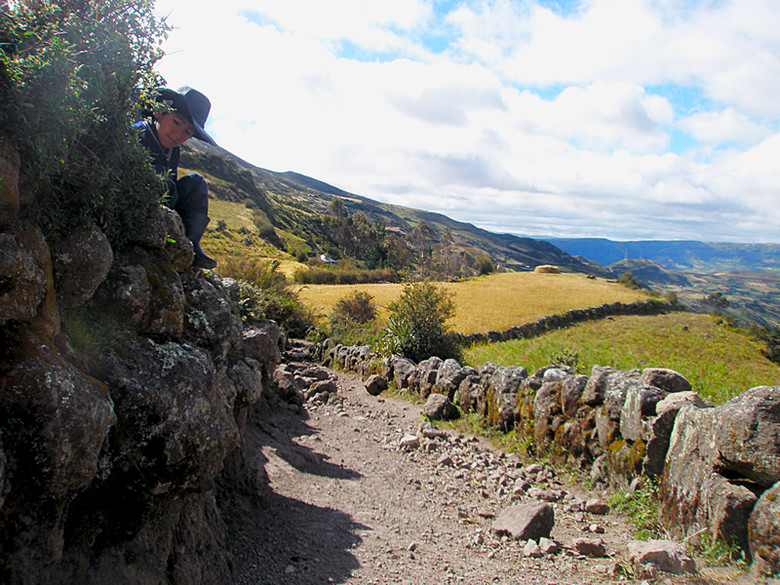 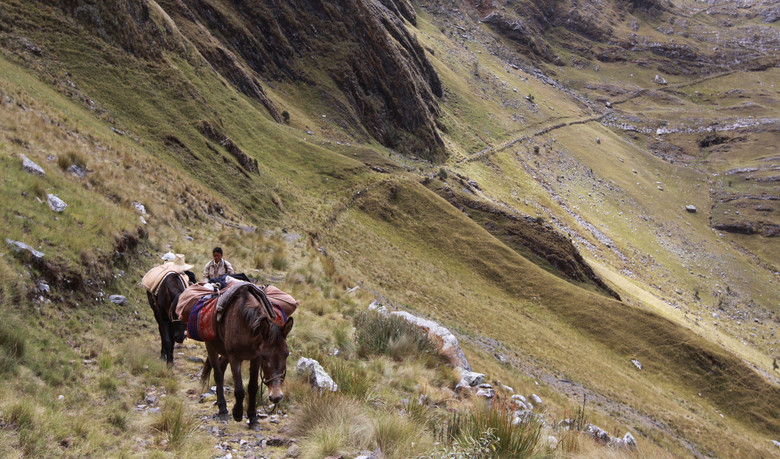 On top of it was delivered 200 carefully selected children without a single blemish or mole on the body. Prince several times touched the pure skin of babies, and then he could rule the Empire. Children, odurmanit drugs, sacrificed to the gods.

Curious secret cult of the road, “sons of the Sun”, for example carved in the rocks near the Imperial baths (Tampa-Beat) the tunnel to the underground caverns, sanctified by the cult of the Jaguar. Along the walls of the tunnel at the time of sacred ritual made famous mummies of the Incas, and deep — seated the Supreme Inca that has been carved in the monolith two-meter throne.

The attraction of the Incas to the underground roads due not only to strategic military considerations and beliefs drevnerusskogo of the population. As the story goes, the first Inka, the founder of a great dynasty, and his wife passed from the Bolivian lake Titicaca to the future site of Cuzco under the ground. 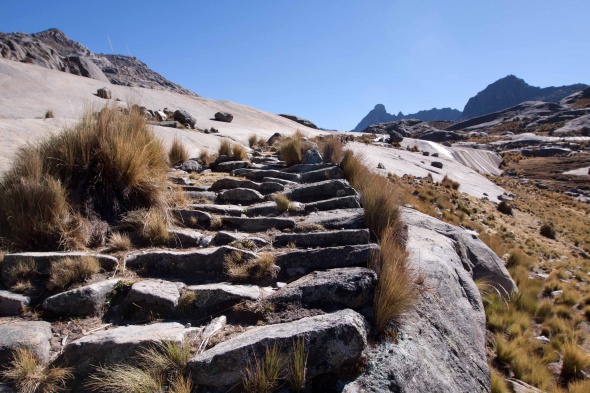 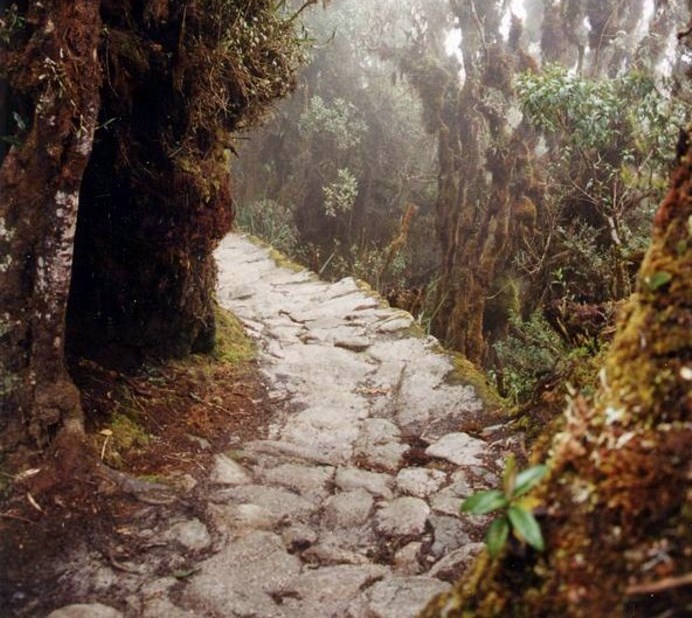 Around Latin America’s largest lake discovered traces of an advanced civilization is Tiahuanaco. On the territory of 500 km2, there were approximately 20 thousand settlements, connected by a Causeway, radiating from the capital, Tiahuanaco in the agricultural district.

Aerial photography made it possible to detect road two thousand years ago. Photographs depicting a stone path extending up to 10 km, aspiring, probably, the main highway encircling the lake.

All this — convincing arguments in favor of the hypothesis that the great Inca civilization emerged out of nowhere and that the road Tawantinsuyu learned from their predecessors, representatives of the cultures of the Moche, Paracas, Nazca, Tiahuanaco, created in turn, a great road network. 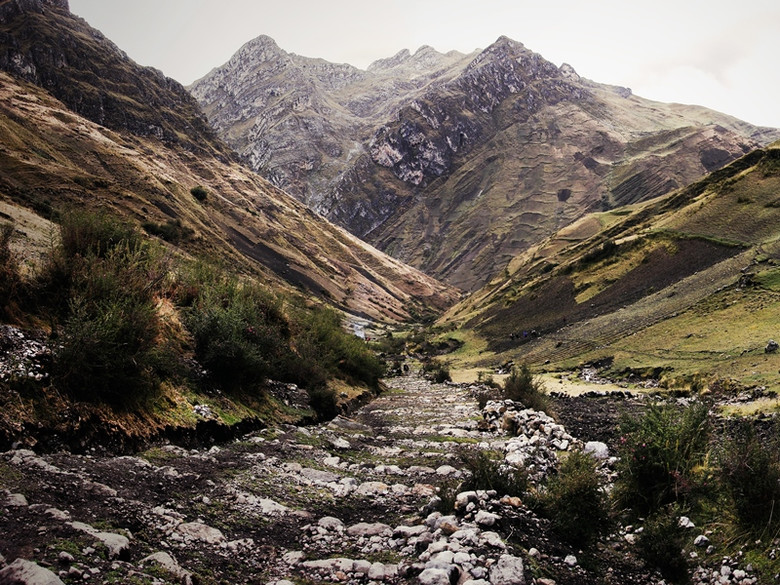