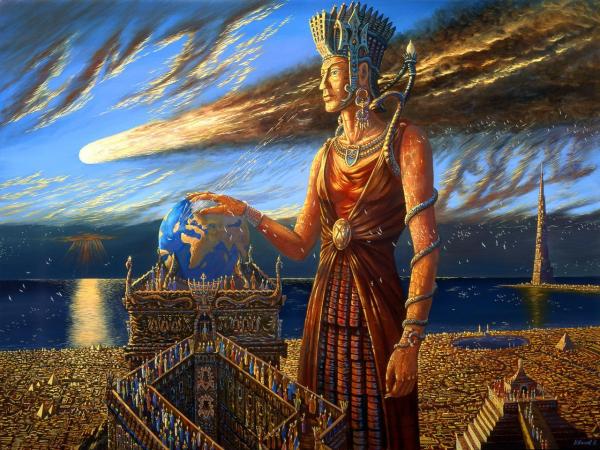 Scientist David Hatcher Childress during his expeditions to the remotest corners of our planet managed to find traces of many ancient civilizations. Their technology was much higher than the development of modern scientists, unable to revive the legacy of their ancestors.

Lemuria was created 78,000 years ago, when the inhabitants of the Earth spoke the same language and had a single power. Education has become an important part of the success of the population, so that during this period each person knew the laws of our planet and the universe. At the age of 28, he became a citizen of Mu, but then the civilization did not achieve great advances in technology, although it could erect stone buildings that are stable during the tremors. As a result of a powerful earthquake caused by the displacement of the poles, the continent plunged into the abyss of the Pacific Ocean, but at the same time the water level after the fall became the creator of new land corners. The Poseidonis archipelago was the residence of the Atlanteans, who replaced their predecessors. This people, thanks to their knowledge, created air transport using the power of anti-gravity, had tools to compress water in the atmospheric layers, and also used vacuum lamps to illuminate houses. The priests knew how to manage crystals in order to receive any kind of energy, that’s just an excessive passion for power that led the amazing country to death.

Indian texts describing the times of prosperity of the Rama Empire are fully preserved, which can not be said about Egyptian or Chinese sources. Now its ruins are protected by the jungle and lie in the depths of the sea, but the country, despite military battles, managed to protect historical monuments from destruction. Vivid examples of this legacy were the discovery of Mozhenjo-Daro, after which Harappa was discovered. There archeologists found valuable artifacts, and they were struck by the developed water supply system, which is now absent in many countries of Asia. In the Mediterranean emerged the civilization of Osiris, which initiated the Egyptian dynasties of the pharaohs. Then the Nile was called Styx and carried its waters westward, so that after the formation of the lake reach Gibraltar. After the flooding of Atlantis, the ocean waters destroyed the cities of the inhabitants of the country and forced them to move to other places. At the bottom of the Mediterranean, scientists noticed 200 huge megalithic structures belonging to the Asians, who also had transport that operated on electricity and other amenities similar to Atlanteans. Malta has preserved the underwater roads of the disappeared race, and the Baalbek platform shows tourists their high technologies.

Now it’s hard to believe that the waters of the oceans flowed through the Gobi desert, and there were also highly developed cities belonging to the Uygur civilization. She owned the secrets of building vimans, and then flying discs were seen by Roerich in the 30s, while visiting Tibet. Some sources mention the elders of the Lemurians who, before the tragic events, moved to this corner of the world, having founded the White Brotherhood. Now we will make a trip to South America and visit the ruins of Cusco, where the buildings created with the help of unknown technologies were preserved. Until now, their walls are not subject to destruction, and then you can see the ruins of Puma Punka near the 100-ton blocks scattered by unknown force in Tiahuanaco. This mysterious people also disappeared from the face of our planet after a natural cataclysm, giving way to Maya. They possessed profound knowledge in the field of mathematics and astronomy, trying to keep harmony with nature during the construction of canals and planting gardens in the cities on the island of Yucatán.

The ancient Chinese also have a direct relationship to Lemuria, because the manuscripts retained descriptions of chariots flying in the sky, and technologies for processing jade. In addition to toilet paper, this civilization knew how to print books and created rockets, and in the 1950s scientists found aluminum tapes that had been extracted with electricity thousands of years ago. The Israelis and Ethiopians also possessed secret knowledge, as eloquently told by the Jerusalem temple, built on huge stone blocks. The legendary Ark of the Covenant was previously kept in the Great Pyramid, but Moses carried an electric generator along with a golden statue from Egypt. Polynesians had their own civilization Aroe, which also applies to the island of Easter with its sculptures.

In the 80s, American scientist Victor Mayer visited the provincial Chinese museum and was shocked by the sight of the mummies of people found 10 years ago in the Tarim basin. They outwardly resembled the Europeans, and also there were objects that did not exist 2500 years before our era. Wheels with knitting needles and bronze ware have become only a small legacy of blond rulers of the country with blue eyes. It turned out that in ancient times in the territory was a city whose inhabitants built the Great Silk Road. In the 1990s, the Chinese banned further research because they did not want to deprive themselves of the privileges of discovering ancestors that did not belong to them.