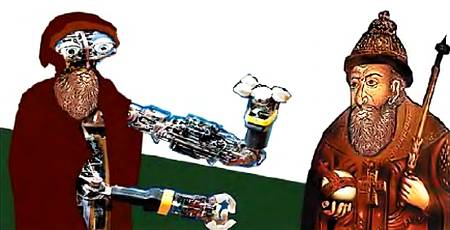 Letters to nobody famous Dutch merchant Johan Vema so, probably, and would remain lying unclaimed in one of the departments of the National archives of the Netherlands, not find them, two young scientists a real sensation of the time of Ivan the terrible.

Sensation that can turn our understanding of the history of the emergence and development of robotics.

Peter Dancy, the “clean”, so to speak, a historian who is interested in more than just manners and lifestyles of people from different eras. Intrigued by Russia, he tried to find the archives for something interesting of our history.

And came across letters, diaries and notes of the merchant Johan Vema, which, as evidenced by the meticulously dated, repeatedly visited Russia a “guest”, that is, traded with merchants and… with the yard of Ivan the terrible.

Less inquisitive than VEM, the man most likely would have postponed all of these papers — the merchant too much detail counted (obviously, for the edification of motam – the heirs) on the basis of many trading operations with his contemporaries and subjects of the king, who in recent years have increasingly called the Tsar-educator.

Another put down… And Dancy thumbed and thumbed through until I find the records that have interest not only for one a long time ago in Bose deceased hoarder. First, the young Explorer found a few separated by time in months or even years of the date of the sale to the Imperial court large lots of books. “And even purchased books, manuscripts, printed and sold to the Royal warehouse on 5 thousand gold guilders”.

Sum in those days is incredible. Dancy calculated then a whole flotilla of merchant ships were required for the delivery to the court of Grozny.

Well here, for example, the Dutchman exaggerated, not to buy one only to Western cultural works the Russian tsars cut a window to Europe. But the fact remains, the Sciences Ivan thought, no less than of the suppression of the “loyal Chad his.”

But “iron man”, the memories of which Dancy stumbled a few evening classes in the archive, is news. First, he adopted a phrase for the usual play on words:

“Beat iron man for the amusement of revelers the Royal bear, and the bear ran from him in wounds and abrasions,” “Iron man to the surprise of all brought the king a Cup of wine, bowed to the guests and something to hum on this intolerable in Russian, I never succumbed”.

Sorry I didn’t respond. Probably it would be found otherwise much more detailed description of the “iron man” and his strange songs.

However, found rows Dancy enough to contact his friend, the friend is still in College, a specialist in robotics Steve Lennart.

Together they took the trouble to search through the Mont archival dust, to find and restore records and letters of contemporaries terrible and Vema.

Here it is! “Iron man” or “iron man”, the serving at the table or in the Palace is not worse than living a servant, was found rotting in the securities of two merchants who regularly traded with Russia, and was admitted to the Royal court. One of the authors more fond of Russian curiosities, than the counting of rubles, and Gulden.

“Iron man” waited on the king at the table, gives him stunned upon seeing it, a coat, a broom sweeps the yard. When the king objected that this thing is not art master creation, the king first, for evermore.

But drinking a Cup of Malvasia, clicked three people artisan appearance, dressed in Boyarsky, and something they were ordered. They opened hidden under the clothes of the iron man cover, inside it was the gears and springs that move the hands, feet and head. Guests fright sobered up, and Russian Tsar pravachol like a servant “was in Russia for another century or two or three ago.”

Interesting testimony that “iron man” served at the king’s table only in hot Sunny weather. After reading this from Vema Lennart, a journalist with the review to a specialist, candidate of technical Sciences, research associate of the Institute of metals and metallurgy Henry Dobrovolsky.

— I think Dancy Lennart slightly fantasize, attributing to the Palace the terrible masters the ability to create almost solar panels. All, in my opinion, easier. If you estimate the level of development of the technology of the time and take into account the love of rich people for all sorts of clockwork boxes, mechanical “musical boxes”, it is possible to build this version.

“Iron man” is driven by mechanical propulsion which basic element was a bimetallic spring. Science has evidence that, in principle, the problem of bimetal plates solved in practice even chemists. The spring sun quickly warmed up, and this undoubted prototype of the modern robot “not lazy” and turned faster. As was programmed team?

This question is much more complicated. In General, a system of “control at a distance” by including a specific gear level of the technology allowed to solve. Chimes because, among other things, began regularly to beat the allotted time before the terrible.

D. Larin managed to find evidence that distant descendants of modern robot (music box elaborate design, mechanical pianola, etc., working on exactly the same principle) was created here in the us, not imported from afar.

Now foreign Bloch, a savvy left-Handed, has turned from a legend into a fact of history.

“Iron man” was most likely the design is complicated, but in miniature technique was inferior — he was “five fingers above a normal person and turned more sharply than would we.”

If you saw, by the way, how to turn industrial robots — steel machine-hands, used for example when welding or painting car bodies? You are absolutely right! Somewhat sharper than their creators.

In my opinion, and this record of the papers found Dancy and Lennart, shows: ancient Russian masters collected fantastic for its time, an industrial robot with a specific task. What was he cited for no current sources of energy… The higher the merit of the craftsmen.