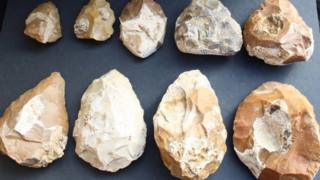 Israeli archaeologists have discovered near the Tel Aviv site of prehistoric people, which they call a paradise for hunter-gatherers who lived there about half a million years ago.

On the site of the excavation between the busy highway and the town of Jaljuia inhabited by Israeli Arabs, hundreds of flint axes and other household items were found.

According to experts, at that time a small river flowed in this place, there was lush vegetation and many animals, which created ideal conditions for the life of prehistoric people.

Ran Barakai, head of the Department of Archeology at Tel Aviv University, notes that the parking lot has been remarkably well preserved.

“For people in those days, it was a kind of paradise, and they always came back here,” he says.

“The river brought here silicon stones from neighboring hills, so that they could make knives and axes right here, in place.” The river also attracted wild animals, and we could immediately hunt them and then eat them. a prehistoric man, “he says.

The parking was discovered at a depth of about five meters under a modern surface, and judging by the detected objects, it was used by the ancestors of the modern man – Homo erectus.

The Israel Antiquities Authority, whose specialists also took part in the excavations, claims that the items found shed light on the lives of our ancestors.

“This is an amazing discovery, since all the items are in very good condition, and this helps us to better understand the material culture of that era,” says Maayan Shemer, head of the excavation department of the administration.

“There is no doubt that researchers who carefully study these subjects will help us better understand the life and customs of people during this period,” she adds, writes the BBC.

Archaeologists began excavating at this site in 2017, after it was announced that this site is allocated for construction.

Homo erectus is the oldest fossil species of people who could walk on two legs. They are considered the immediate ancestors of modern man.

They were larger and stronger than modern people, but their brains were less developed.