It became known as quickly dinosaurs hatched from egg 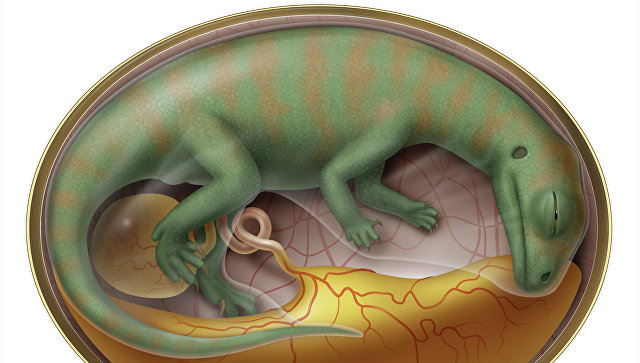 Dinosaurs spent in eggs a lot of time – on average, the cub of ancient “pangolins of horror” was born only in 3 or 6 months after fertilization of a nucleus.

“One of the most aged and larger secrets of dinosaurs was that we knew nothing about development of their nuclei. Whether their eggs also sluggishly were incubated, as well as layings of their closest relatives, crocodiles and lizards, or they were more probably on the modern descendants, birds whose eggs develop very quickly” — Gregory Eriksson from university of Florida in Tallahassee (USA) declared.

Only simple examples of petrified eggs of dinosaurs and their fragments скорлупок were known to until recently scientific, however in the last 20 years the picture cardinally exchanged. Paleontologists found at once several “cemeteries of eggs” in the north of China and in the Mongolian part of the Gobi Desert, and tens of eggs of the largest dinosaurs of Earth in Argentina. Thanks to them we know that some dinosaurs were the warm-blooded beings who are hatching out eggs approximately the same as it is done by the modern birds.

Eriksson and his colleagues revealed one more secret from the first days of life of these ancient reptiles, studying several extremely unusual eggs of prototseratops (Protoceratops andrewsi) and giparkhozavr (Hypacrosaurus stebingeri) which are recently found in Mongolia.

In these eggs as the scientist tells, very infrequent and extremely interesting thing – tiny fetal teeth remained. These teeth, according to Eriksson, can be considered a peculiar analog of “annual growth rings” of trees as they grow layerwise, forming on one new layer every day. Respectively, if to cut such “primary tooth” and to count number of layers, it is possible to learn how long this or that nucleus carried out in a womb of mother or in egg.

Being guided by this reason, Eriksson and his colleagues prepared several teeth in the eggs found them the ptitsetazovykh of dinosaurs. As it appeared, dinosaurs were more similar to crocodiles in this relation, than on birds – cubs of prototseratops spent on average about three months in egg, and giparkhozavr – about half a year.

If there was fairly inverse, then cubs of dinosaurs had to hatch in 45-80 days, but not three months or half a year. On the other hand, dinosaurs nevertheless developed slightly quicker, than lizards and crocodiles – they were born as show calculations on the basis of similar “day layers” in teeth of nuclei of reptiles, for 17% quicker them.

Scientists: a part of dinosaurs built nests and hatched out eggs as birds
As scientists believe, sluggish development of a nucleus and need to long hatch out eggs could serve one of the main reasons of extinction of dinosaurs after falling of an asteroid on the peninsula Yucatan 65,5 million years ago. In turn, ancestors of birds whose eggs developed many times quicker, could survive as they had to spend less time on a nest, than to their larger and sluggish relatives, and to risk the life less at cultivation of posterity.