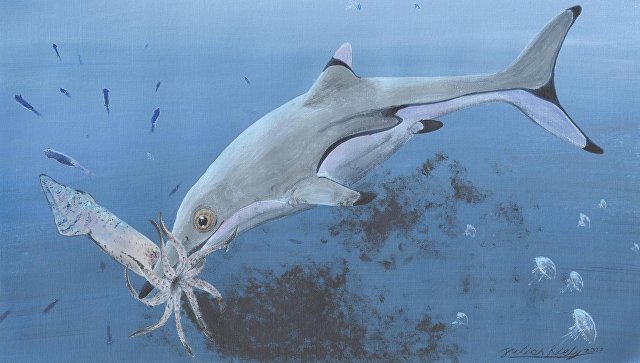 Ichthyosaurs, the “cousins” of dolphins from the seas of the Mesozoic era, ate large squids and fish, like their current cetacean heirs, British scientists say in an article published in the journal Historical Biology.

“Between the ribs of this ichthyosaur we were able to find a number of hooks that covered the tentacles of prehistoric squid.It is extremely surprising that we managed to find out what the last time a creature dwelt on the Earth about 200 million years ago.Other other ichthyosaurs ate fish in the early days and this discovery is therefore particularly interesting, “said Dean Lomax of the University of Manchester in the United Kingdom.

Marine reptiles of the Mesozoic era are in many respects a mystery to paleontologists, since their remains were extremely rare in the rocks of the Earth because of the characteristics of the environment in which they lived. Nevertheless, over the past two decades, scientists have discovered many interesting facts from their lives that radically changed their perceptions of how they lived and what they ate.

For example, three years ago, scientists discovered that ichthyosaurs had migrated to live births before they went to life at sea, and found that the pliosaurs, the main marine predators of the Cretaceous, suffered from cancer and arthritis. In addition, other features of their anatomy have indicated that they have much in common with modern marine mammals occupying those niches that have become free after the extinction of giant sea lizard 65.5 million years ago.

Lomax and his colleagues uncovered another mystery of the sea monsters of the dinosaur era, studying the remains of the smallest ichthyosaur in the history of science, the Ichthyosaurus communis, whose adult specimens reached a length of only 70 centimeters. This sea lizard was one of the first finds of its kind in the history of science – its remains were found by Mary Anning, the first female paleontologist, in the chalk deposits on the southern shores of England and described as far back as 1822.

Two years ago, one of the authors of the article, Nigel Larkin, analyzed the fossils of these lizards, stored in the museum of the University of Birmingham, cleaning and cataloging them. One of the smallest of these fossils attracted his attention by the fact that inside it contained unusual inclusions, and he turned to Lomax, a specialist in the field of paleontology of ichthyosaurs.

As Lomax discovered, Larkin managed to find a unique fossil – the full skeleton of the newborn Ichthyosaurus communis, who died almost immediately after he managed to dine with one of the squid that inhabited the seas of the Earth at the beginning of the Jurassic period, about 200 million years ago.

This discovery, according to paleontologists, is especially important for science because the scientists could not previously find primitive ichthyosaurs, feeding on something other than fish. Accordingly, the presence of at least two variants of a diet in ichthyosaurs indicates that these sea lizards began to dominate the seas and occupy a variety of ecological niches already at the very beginning of their evolutionary path, conclude Lomax and Larkin.