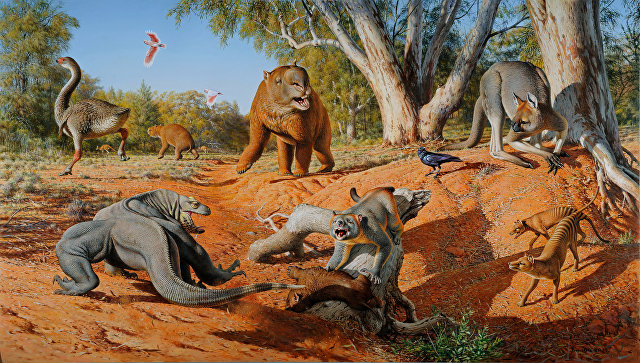 Paleontologists have found in sediments on the ocean floor another evidence that the penetration of the ancestors of the aborigines in Australia led to the extinction of three-meter “bird of terror” and other megafauna.

“The presence in oceanic sediments a large number of spores of the fungus Sporormiella, living in pellets of excrement of large herbivorous animals, suggests that in South-West Australia had a large number of large mammals. They all disappeared about 45 thousand years ago in a period that only lasted a few thousand years,” says Gifford Miller (Gifford Miller) from the University of Colorado at Baludera (USA).

About 60-70 thousand years ago Australia was inhabited by dozens of species of large animals – six-foot lizard-megalania, three-meter “bird of terror”-genyornis, a giant wombat weighing a ton, kangaroo and other species of birds and marsupial mammals. Till our days survived only ostriches-EMUs and cassowaries, and all the other animals and birds whose weight exceeded one hundred pounds, almost extinct 45-50 thousand years ago.

In recent years, paleontologists are finding more evidence that this process was involved. For example, last year scientists discovered the charred shells of eggs of genyornis that the ancestors of the aborigines roasted at the stake, and a little earlier there were traces of the war between megalania and people and other hints that people actively hunted megafauna of Australia.

Another proof that people were involved in the death of large animals, Miller and his colleagues found by studying sediments at the bottom of the Indian ocean adjacent to South-Western coasts of the southern continent.

As the scientists explain, the wind constantly blows into the sea from the land a variety of traces of life – pollen, seeds, plants, ashes from forest fires and even the spores of fungi living in excrement. These fungi in the past has aroused the interest of paleontologists, as some of them live exclusively in the excrement of large herbivorous mammals.

Four years ago, another group of paleontologists conducted excavations at the bottom of the drained lake in North-Eastern Australia and found that the spores of the fungus Sporormiella have actually gone out of his deposits of approximately 41 thousand years ago. This is the first time pointed to the fact that the natives, penetrated to the continent at the time, could be implicated in the extinction of the megafauna.

As Miller explains, the discovery of one point doesn’t mean anything – it is possible that the megafauna vanished only in the vicinity of the dry lake, since on its banks have settled. Therefore, the researchers conducted a series of new excavations on the opposite side of Australia, where, according to the researchers, the aborigines had penetrated in the last turn.

The picture here was exactly the same – Sporormiella spores disappeared from the sediments on the ocean floor at the same time, when they disappeared from the lake. While the flora in this part of Australia has changed and stayed the same for a long time after the disappearance of Sporormiella and related animals that denies climate causes the extinction of megafauna. This is supported by the fact that abrupt climate change that occurred 70 thousand years ago, has not led to the disappearance of the dispute, although their number is greatly reduced.

According to the paleontologist, this discovery did not necessarily mean all-out war the first Australian aborigines against the local giants to the disappearance of the latter were quite small the death of their calves and cubs, where the person it was easier to hunt. In this case, as shown by calculations of scientists, the process of extinction is only a few hundred years, at that point similar to the fossil record.