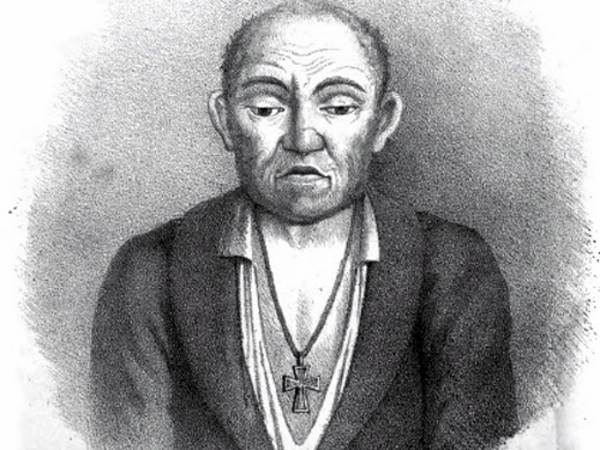 Prophecies and predictions have always been interested in people. We know names such as Merlin, Nostradamus, Irinarkh, Abel, James Bruce, Elena Blavatsky, Edgar Cayce, Erasmus Darwin, Wang, messing, and others. Unfortunately, many names are erased from human memory and into oblivion.

So about Ivan Yakovlevich Koreisha now few people remember. But in the middle of the XIX century the name of this fool-prophet literally rattled the Central provinces of Russia.

His fame was so great and serious that Ivan Yakovlevich was in all dictionaries and encyclopedias, published before the October revolution. And not only in dictionaries: Dostoevsky entered the blessed in the novel “Demons”, Leskov made the hero of the story. However, Karasu in his works and Ostrovsky, Bunin and Leo Tolstoy. Well, life Ivan, Karachi really was worthy of admiration.

Ivan Yakovlevich was born on 8 Sep 1783 in the Smolensk region in the family priest. Studied at the Seminary, but a priest to take did not want, went to teach at a religious school.

In 1813 the young man were guilty of something (anything – history has informed us), he was threatened with trouble. Frightened, Koraysh went into the forest. Maybe in this crazy, who knows?..

Four years later, the Holy fool found in the woods by the peasants, took in the old bathhouse on the outskirts of Smolensk, where he settled. Here and there were rumors about his gift of Providence, and soon his incredible ability to become known throughout the region. And he, not wanting any glory and striving to dissociate itself from the people, pretended to be at all delusional. Therefore he was called a cunning fool.

Curiously, the door to my bathhouse Ivan Koraysh put a sign up to say: he accepts only those who will crawl to his knees. The other wishing it cooled down: who wants to rant and dirty clothes?

This was done, obviously, with the intent: who just came out of curiosity, what exactly is crawling on his knees would be uncomfortable, but one serious problem that not only on his knees on the belly crawling.

Somehow through Smolensk passed a nobleman. He liked the local beautiful daughter widow widow. The girl never agreed to become a kept woman, and then the nobleman carried on the conversation about marriage. The widow, of course, flattered by his offer, but fear and taken: and well as will deceive the nobleman’s only child?

And here she thought up with her daughter to go to Ivan Yakovlevich for advice. He showed that the long groom in marriage, has three children, and then confirmed. The girl the nobleman refused, became a nun and all his life, until his death blessed, and have corresponded with him. (These letters, incidentally, preserved in the Museum, and of them clearly implies that he wrote them a very normal person.)

Same unlucky gentleman, upon learning the reason for the refusal, how should I beat the predictor, and even a complaint to the Governor filed: Koraysh allegedly frustrating the family and in General, deprived of reason, people spoil… a Complaint, I must say, took: chin painfully “groom” was high.

It was decided to take Ivan Yakovlevich in Moscow, in the Mad house that used to be called asylums for the criminally insane. Passed the accident, Karasu as violent character and immediately thrown in a dank basement, chained to the wall. Instead of the bed threw a tuft of hay, kept on bread and water was the order of the authorities.

When Ivan Yakovlevich even drove to Moscow, Moscow has been buzzing: the glory of the cunning Holy fool ran in front of him. Moscow people have long heard about the soothsayer, and as soon as Karasu brought that shaft pushed to it. Sometimes in day on one hundred people. The boss is not confused – took 20 cents for admission, and the money went to the needs of the Mad house.

In 1821, a clever fool came a young doctor. Seeing the conditions in which he lives Koraysh, the doctor was horrified. The seer relaxed, was placed in a separate room – spacious, bright.

But Ivan Yakovlevich here and began to live in usual conditions: huddled in a cramped corner near the stove. Seen, such a shelter was more convenient for him. The rest of the room he left for the incoming “clients”.

The scope of unusual abilities, Karachi was extremely wide: he healed the sick, foretold the future, including such mundane but important things as frosts, droughts, death of livestock, helped to arrange the marriage… he did not take Money, then he began to wear food – cakes, sugar, fish, meat, fruit, but it was hardly used and everything was distributed to others.

According to surviving memoirs, Ivan Yakovlevich loved to pound large cobble all that under hands came across: stones, bottles, bones, erasing them literally into a powder. “Material” delivered to him which was with him every second of the retired soldiers, which the Koraysh called IronKey.

The pounding took part and visitors, which Ivan Yakovlevich invited to work hard. Usually “works” he chose the rich sissies. What he did is unknown.

Whether in this process there was some mysterious meaning, or just put some people in place, confirming their old nickname: the cunning fool.

Interestingly, the same rich sissies Koraysh were invited to share a meal. And as the prophet was eating messily with his hands, dumping everything in one bowl, the rich under any pretext tried to give up… Sometimes Koraysh were ordered to any wealthy people personally with him to help a poor widow or a beggar.

Occasionally Ivan Yakovlevich staged an incredible spectacle as befits a Holy fool. Obscene swearing, sometimes I could hit. He did not complain and idle company of young and of idlers who came to stare at him.

Such a case is described by Dostoevsky in “Demons”. Koraysh Dostoevsky launched under the name of blessed semen Yakovlevich, to ask which came the rich gentlemen.

Questions afflicted Ivan Yakovlevich responded with notes. At first glance it was the doodles, however, in letters dated Greek and Latin words. How he knew them? Mystery.

When the Saint became old and weak, on the issues under his dictation, answered Paul Aladin – educated young nobleman who believed in the seer.

Ethnographer Ivan Gavrilovich Pryzhov, skeptical about Koreisha, said that in the notes you can see all at the same time and not see anything, as they are mysterious because of the lack in them of any meaning.

However, it is possible to argue with the well-known historian: some written answers Ivan Yakovlevich survived and I must say that they are not meaningless. The whole thing, apparently, that Ivan Pryzhov saw Karasu to the end of his life, when the prophet was already under eighty.

Pryzhov describes what struck him the house itself with lots of icons. Suffering is a crowd. On the floor lay a Holy fool, half covered by the blankets. he could walk, but for several years preferred to lie there in bed. His head is bald, the face is unpleasant…

Among the patients of the hospital of the Transfiguration, at the time of stay of the prophet, was a priest and father of Samson. The priest was quiet and silent, but with him only Ivan Yakovlevich dropped the mask blessed and spoke friendly like a comrade in spirit.

Many of his contemporaries left their memories of what Ivan Koraysh very successfully relieved from various ailments. The notes are preserved of a Kireeva, the fate of which Ivan Yakovlevich took part. Father Kireeva after the death of his beloved wife hit the booze and drank almost all of the state.

He was advised to appeal to the elder, but he waved: “to go to crazy, you have to be an idiot”. But still bothering him. Barely crossed the threshold of the room – blessed is he suddenly called his name. Kireev was stunned: how does she know?!

Cured him blessed (though made before two hours to pound the stones). However aporocactus was death by fire. And since then Kireev has never slept peacefully, several times in the night stood up, looking over the yard, all the corners of the house.

But the prophecy was fulfilled in another way. Drank anything, ate what poison, but the only heat in the stomach was so great that the audience kept screaming incessantly: “Oh my God, I’m burning, help!”.

I must say that he fulfilled the many predictions, Karachi. Exactly one year before Sevastopol war, in anticipation of a sea of blood, forced Ivan Yakovlevich all who will come to him, to bring rags to make bandages (with her help the wounded stopped bleeding).

And 18 Feb 1855 all day, tell, was sad, had tears in his eyes. Finally said: “we do Not have, Petushki, more than the king…” – and soon learned that the Emperor Nicholas has passed away…

Prince Alexei Dolgorukov, known for his work on the subject of mysticism, believed, Karasu a soothsayer. And brought in its records the following case: “I once loved a woman, to which Ivan Yakovlevich once went for a reading.

Returning from there, she told me, kissing his hands and drank the dirty water that it interfered with your fingers. I became angry and told her that if you do this again, I will not touch it.

But after three weeks she went to see him again. And when he became the ladies to give in turn to kiss his hand and to remember to drink water, having reached it, jumped, shouting three times: “Alex is not ordered!”

Ivan Yakovlevich Koraysh spent in a madhouse forty-seven years, of which forty-four years in the hospital of the Transfiguration. His end was close, he predicted his own death. On the night of September 6, 1861 went down to the images, as befits the dead, and died.

Five days to the coffin with his body were the people. These days has served more than two hundred memorials. The fanaticism of the other believers went to the extreme: the robe in which he died, torn to pieces – believed that the clothes of the deceased diviner will be able to help them in their troubles. Some women continually was besieged by the late wool and took it back with a sense of awe. Even the cotton was sold.

When Ivan, Karasu buried, the coffin was strewed money. The flowers, which it was cleaned, there were rachatani instantly. Some of it was bit off from the coffin splinters…

When they came with the coffin to the cemetery, it almost came to blows. Some wanted to carry the body to Smolensk, the other – male in Pokrovsky monastery. But the top was won by the niece, whose husband was a deacon in the Church in Cherkizovo.

The funeral of Ivan, Karachi took place very solemnly. Despite the fact that incessantly the rain poured down, people had accumulated hundreds of thousands. But no one in the stampede was not injured – which is surprising.

When the coffin was carried to the cemetery, the ladies in crinolines fell prostrate, lay on the road in the mud – to be above them, carried the body of the Holy fool…

The newspaper “Northern bee” broke out on the death of Ivan Yakovlevich two huge materials. The reporter was surprised he wrote that such honors at the funeral never won a single genius Nikolai Gogol, nor glorious warrior Alexei Yermolov.

It is interesting that still in Cherkizovo remember about Ivan Koreisha. And all other visitors to suggest: go to the old Church, where to this day preserved the grave of the great prophet. If any trouble or problem please ask, and Koraysh will help.

And in fact, still come to the tomb of all sorts of people, mostly women, consult with Ivan Yakovlevich, ask about anything… they Say helps.