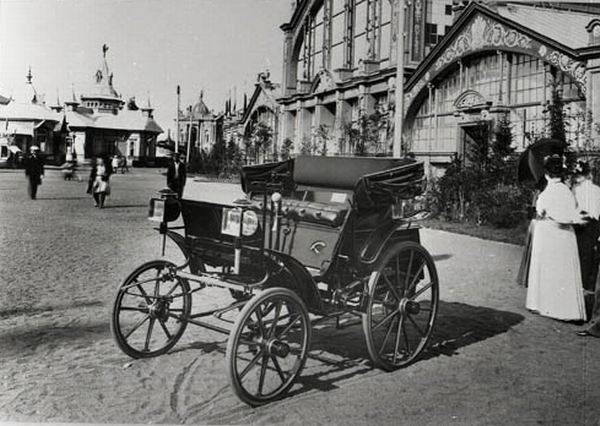 In the pre-revolutionary era, this was the largest exhibition venue in the country, at which the best domestic achievements in the field of industry were demonstrated.

The machine was a four-stroke engine with one horizontal cylinder, which was located in the rear of the body and developed power of 1.5-2 hp. Water was used to cool the cylinder, and the heat exchangers were two brass containers placed along the sides at the rear of the machine.

The ignition of the mixture was electric (battery of dry cells and a patented candle), while on many engines of those years a calyed tube was used.

First of all, the “self-propelled machine” or “gasoline engine” was adapted not only for driving on city roads, but also for off-road and bad roads. The car Frese and Yakovlev equipped with large wheels – the front radius of 780 mm and 836 mm rear. The wheels of the car were bulky enough and, like their spokes, were made of wood. The wheels were covered with solid rubber tires. Production of blown tires in Russia, of course, at that time was still absent.

The length of the car was only 2 meters 45 cm, weight – 300 kg. It turned out to be a compact and maneuverable for its time car with good technical characteristics. With the engine power of two horsepower, he developed a speed of about 20 km / h, which was a very good indicator for those times.

As a result, the Frese-Yakovlev car had a cost twice as low as the then-existing analogues in Europe and America, not yielding to them in terms of technical characteristics. Thus, the day of July 14, 1896 testifies that Russia by right is one of the pioneers of the world automotive industry.