Kowloon – the city of darkness 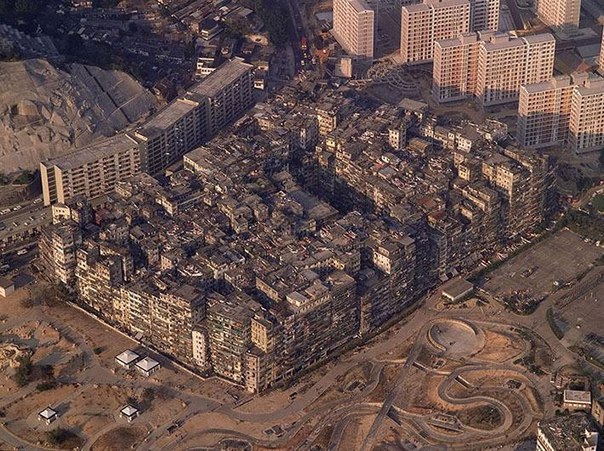 The fortified town of Kowloon – last plotnonaselёnnoe, virtually controlled the governments of accommodation in Kowloon, Hong Kong. Initially, in its place was a Chinese military fort; after the New Territories were transferred to the UK in 1898, rent, walled city became an enclave.

Population walled city of Kowloon has increased significantly after the Japanese occupation of Hong Kong during the Second World War. In 1987, in the city-fortress of 33 thousand people lived in the territory of 6.5 acres (2.6 hectares). In the early 1990s, the population was estimated at 50 thousand, ie it reached a density of two million people per square kilometer, while the average in Hong Kong is a little over six thousand. From the 1950s to the 1970s, the fortress city of Kowloon controlled by triads and it prospered, prostitution, gambling and drug trafficking.

For comparison, if the Kowloon area was in the 1st quarter. km, there was 1.27 million people live. And if Moscow became Kowloon with its area of about 2,500 square meters. km, that would live in the Russian capital almost 3.2 billion people, that is the entire population of China, India, USA and Indonesia combined.

Tens of thousands of people demonstrated miracles of survival and adaptation to the environment, in fact, an anarchist society. There is no central water supply? No problem. 70 wells have been dug, the water of which is delivered by electric pumps on the roof, and from there through the maze of countless tubes are sent to the apartment of consumers. No electricity? Among the residents of the quarter there were many employees of the company Hong Kong Electric, perfectly capable of making Hong Kong illegally connect to the power grid and help in this to its neighbors.

By 1980 it was built about 350 apartment buildings, arranged so tightly that a panorama image Kowloon reminded, rather, one huge and terribly ugly building.

Streets in the quarter, in fact, was not. There were passages that form is so confusing to the uninitiated network that stranger, come here, quickly lose their orientation in space. Buildings were so dense and the space is so valuable that the flats are often hung over the passes without missing to sunlight.

Most of the inhabitants lived in a small apartment with an average area of 23 square. m. Distribution received a variety of extensions to the inner and outer facades of buildings. Those permanently fused in the area formed even a second, parallel land, transition system is at a certain height from the ground. Kowloon converted into a single-piece body, a huge “communal apartment” building-city, though at present come from a post-apocalyptic future.

In January 1987, the Hong Kong government announced plans to demolish the city-fortress. After a difficult process of eviction of people living there in March 1993 the demolition began and ended in April 1994.