Legends of American Indians about a race of giants 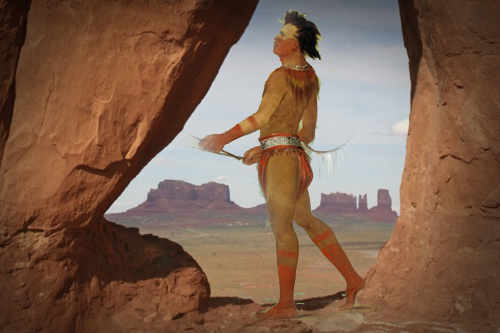 Indian tribes have legends of white race of extinct giants. Here are a few legends, including myths of the North American Indians, Choctaw and Comanche and Peruvian manta.

“The Choctaw legends say about race of giants that inhabited the territory of the state of Tennessee. Fought with them the ancestors of the Choctaw, came to Mississippi from the West. In myths they say that nahollo (race of giants) had a huge increase,” wrote Horatio Bardwell, Cashman in the book “History of the Indians of the Choctaw, Chickasaw and Natchez 1899

Cashman, writes that the word “nahollo” was used to refer to all white people, but originally meant a race of white giants. Choctaw greeted the giants when I first crossed the Mississippi river. Nahollo, practiced cannibalism. Choctaw killed them at the first opportunity.

“Countless moons ago, there lived a race of white people rise of 3 meters. They were much stronger and richer than present-day white people. They inhabited a vast territory, stretching from sunrise to sunset. Their fortress crowned peaks of the mountains, protecting the people living in the valleys.

They were superior to any prosperous nation that lived before them or after. They excelled in craftsmanship, were courageous and warlike. They ruled the land we inherited from our ancestors. Compared to them the present-day whites seem like pygmies in terms of growth and craft” — describes in 1857 the race of giants the Rolling Thunder, the chief of an Indian tribe, the Comanches living on the Great Plains.

The leader explained that when this race has forgotten about justice and mercy and became too proud, they destroyed the Great spirit. All that was left of them ― mounds on the plateau, which are still visible. This history is described by Dr. Donald Yates “the Panther”, the author of books on the history of the Indians.

Yates also writes about starnaked of the legends of the Navajo Indians, “the great race of white giants had a mining industry. They enslaved lesser tribes and had strongholds all across America. The giants were destroyed or returned to heaven.”

In 1864 Pedro de Cieza de Leon in the “Chronicle of Peru” described the legendary giants, which he told the Indians manta: “they Have stories about the giants in Peru they are passed from ancestors from the very ancient times”.

“On the coast they arrived on boats made of reeds, the size of large ships. Their growth was so huge that the average person them on the knee. Their limbs proportional to body size. Heads were frightening: with long hair to his shoulders and eyes like small plates”.

Sexual preferences giants cause disgust the Indians, and the heavens destroyed the giants because of immoral behavior, says Leon.

Pautov has oral legends about the red-skinned cannibals with a growth of 3 meters. They inhabited the area Lowcock-cave in Nevada. It is unclear — this is the original legends about giants Sitek a distortion and exaggeration of the original myths. The majority of Pyatov killed or died from illness in 1833 at the time of the expedition of Joseph Walker.

According to Brian Dunning of the website Skeptoid, in the legends of Pyatov does not say that the welcome to the giants. It says that people lived in Lowcock-cave and cannibalism.

In Lowcock-cave found the human remains. In a separate bone marrow removed, which was probably eaten. However, cannibalism is not special phenomenon among the Sitek.

Among the remains of Sitek do have red hair. But black hair can parajet over time.

The miners have unearthed artifacts in 1912, After the excavations the finds were piled up before you get to the University of California. Excavations were conducted negligently and did not meet modern standards. According to supporters of the theory of giants, scientists deliberately hid the remains of giants.