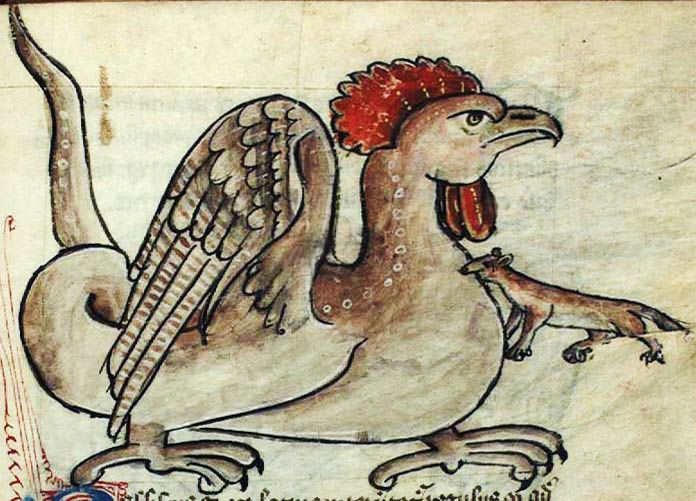 One of the biggest attractions of Rome are its famous catacombs (Catacombe di Roma). They arose in the period of early Christianity. In total in the Eternal City there are more than 60 various catacombs in the extent of 150-170 km.

Inside, there are about 750,000 graves, most of which are located underground along the Appian road. There is a version that once there were quarries.

The Roman catacombs are associated with the legends of the Basilisk – a creature with a bird’s head, the body of a winged dragon and the tail of a snake. Its description occurs as far back as the 4th century BC, in the “Natural History” of Pliny the Elder.

According to ancient beliefs, basilisks are capable of killing people with poisonous teeth, as well as their breathing and gaze. Hence the concept of the deadly “view of the basilisk”.

In the medieval textbook of alchemy, this monster is given such a characteristic:

“From his eyes, trees and rocks are burning, stones are cracking, rivers and lakes boil. When Basilisk is furious, lights and torches go out in a hundred paces, the earth shudders, birds fall dead, and there is no escape from this monster, and there is no possibility to moderate his anger. Where can I find the strength to curb the Basilisk? ”

According to sources, the basilisk pulls to where “darkness and a lot of blood”. The Roman Basilisk lived in the dungeons of the Colosseum. He was met outside the walls of Aurelian, not far from the Appian road, and also under the terms of Diocletian. In the baths – Roman baths – people sometimes disappeared. Their disappearance was attributed to the atrocities of Basilisk.

Servants of the church more than once tried to fight the evil terrorizing Rome, including with Basilisk. Particularly supposedly succeeded in this, Pope John XII, who, according to rumors, entered into personal contact with the monster. But after the pope died suddenly – either from some kind of illness, or after the brutal beatings inflicted on him by someone in a deserted place, they began to say that Basilisk was the fault.

Servants of the deceased said that near the ancient ruins they met a monster with burning eyes. Seeing him, they lost consciousness, and when they came to, Dad, tormented and bloodied, lay on the ground.

We saw Basilisk not only near the dungeons, but also in other places. So, in the late 30’s. In the last century the monster allegedly noticed a night watchman near the Marcellus Theater. A few days later a corpse of a vagabond was found near the theater building. The nature of the injuries on the body indicated that it was unlikely that they could have been inflicted by a man. 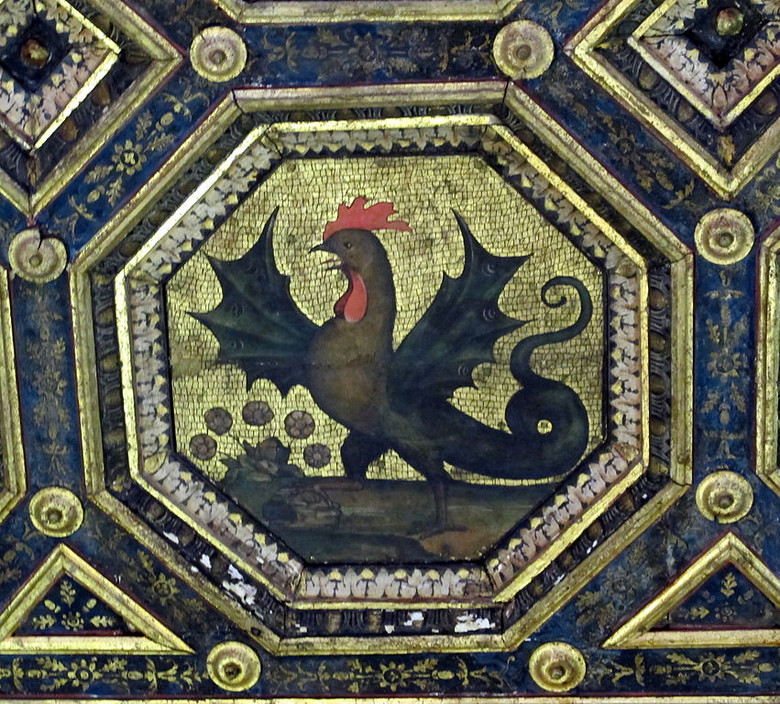 Drawing the basilisk of Pinturicchio’s hand in the Italian palace of Palazzo della Rovere (“The Code of the Demigods”, 1501)

Soon the creature with burning eyes met on the Appian Way of the company of youth, passing by the tomb of Cecilia Metella.

We saw it on the territory of the Roman Forum, near the ruins of the ancient cult structure Umbilikus-Urbis, which in the Middle Ages was called a “satanic place” by one of the Catholic clergy.

This time with Basilisk three homeless people came to Rome for work. Two of them turned to flight, and the third, running away, stumbled and fell. After that no one else saw him. Comrades of the disappeared later returned to this place to find him, and they found with horror on the stones and earth blood stains.

The case took place under the reign of Mussolini, who was informed of the incident. As a result, the two survivors were sent to work in the quarry, where they disappeared completely. So it is not known who was more fortunate – to them or their friend, overnight torn by a monster.

They say that the Basilisk still lives in Rome, but only hides more carefully from people.