Legends of the Dogon about the gods descended from heaven 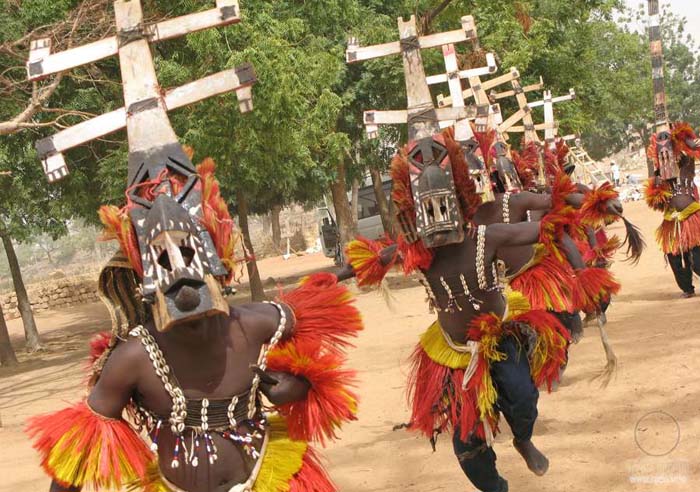 Sirius as the “habitat” of the gods, appears in the myths and legends of the African Dogon tribe. According to their legends, they descended from the sky and taught them various crafts and arts, gave them extensive knowledge about the structure of the world around them, and then returned to their “home”.

The astronomical discoveries of millennia ago, the priests of the African people, Dogon still shake ethnographers and paleoastronomers.

In the south of Mali on the hard-to-reach plateau of Bandiagara in the impenetrable jungle, a French expedition led by ethnographers Marcel Griol and Germain Dieterlen in 1931 unexpectedly discovered the Dogon people. They were so interested in scientists that Griol and his colleagues studied these amazing Africans right up until 1952. And to be surprised was that: living in complete isolation from the outside world, Dogon from generation to generation for millennia passed the ancient astronomical knowledge, which at that time even modern science only guessed.

For example, the theory of the “big bang”, which gave rise to the development and expansion of the universe, astronomers are still arguing. And the priests in the 1930s told scientists: “At the beginning of time, the all-powerful Amma, the supreme deity, was in a huge rotating egg, in the center of which arose a tiny seed. When it grew and burst, the universe appeared. ”

But one of the most amazing discoveries of Dogon is the information that the brightest star in the sky and in the constellation of the “Great Dog” Sirius is a whole system of four stars! Moreover, the nearest satellite they call “Po”, which means a millet seed – a hard grain. “This star consists of an incredibly heavy, dense metal, such that all terrestrial beings, united, could not raise it,” they told the French ethnographers. “Po” or Sirius B (stars with “close relatives” to avoid confusion in them, called by the letters of the English alphabet – A, B, C, etc. – Ed.) The astronomers were finally not only considered at the beginning of the 20th century, but also found that it is a white dwarf – a super-dense decaying star. Even if we assume that the Dogon had a telescope two thousand years ago, how could they know that they were watching a “heavy star”?

Who was the Dogon teacher? Judging by their myths, the aliens are from this “dog star”. It was they who told the savages about the satellites of Jupiter, the spiral structure of the Milky Way, the rings of Saturn, and many other interesting things. So one of the dogon myths reminds one of the well-known biblical stories that was passed from mouth to mouth long before the appearance of the Bible. This is the story that from Sirius to Earth in Africa several thousand years ago a certain god Nommo arrived with an ark full of different animals and plants, which reminds of a much later story about the Noah’s Ark.

Here is what we read in Griol’s records: “Dogons tell us about the three landings of the” angel “Ogo from the constellation Sirius. And the first arrival can not even be called a landing on the surface of the planet, since it ended with the transformation of the Ark of the Ogo into … the Earth. For his second space travel, Ogo built an ark of much smaller dimensions. As a thrust for him, he used the grain “by” – in the Dogon language this means a millet seed, and in a broader interpretation “by” is the tiniest particle of matter, that is, an atom. In other words, the second ship Ogo was on nuclear power. With this second visit, Dogon is also associated with a whole story, which, in combination with the rock drawings of their ancestors, can be interpreted as the basic principles of starting and landing space ships on the surface of celestial bodies. The third time when landing, the ship Ogo was wrecked.

Then came the era of another “angel” Nommo, whose task was to populate the Earth with people. Nommo built the Ark more complex than the Ogo ships, consisting of two parts and divided into 60 compartments. In these compartments, Nommo placed all the animals and plants that were to multiply on Earth. And besides, there were “four pairs of twins, that is, eight Ancestors” in the ark. They looked like amphibians – semi-humans – half-swayed with flexible limbs without joints, red eyes and a bifurcated tongue.

Then the ark Nommo began to descend to Earth on the “copper chain”. However, the landing was not very successful, as “the ark slipped in the mud,” and the hole that he made on the surface of the earth was filled with water, thanks to which Lake Debb, which is still on the Dogon land, was formed.

The leg of Nommo, who set foot on Earth, when he left the ark, left a trace of a copper sandal. After him, the creatures that were in the ark left only the first two compartments of 60. After that, the same “copper chain” the ark was raised back to heaven. Why the crew did not release all the compartments is unknown. And what was in them – too. Obviously, only that Nommo flew from Sirius for the purpose of settling the Earth, and it was in Africa. ”

Recent paleontological studies confirm this myth: indeed, the first people appeared on the Black Continent. There are also paintings in the Dogon temples: the trajectory of interstellar flight is a curved line wrapping the constellation of Sirius and Earth.

Maybe these myths explain the mystery of the origin of life on our planet?