Letters from the past 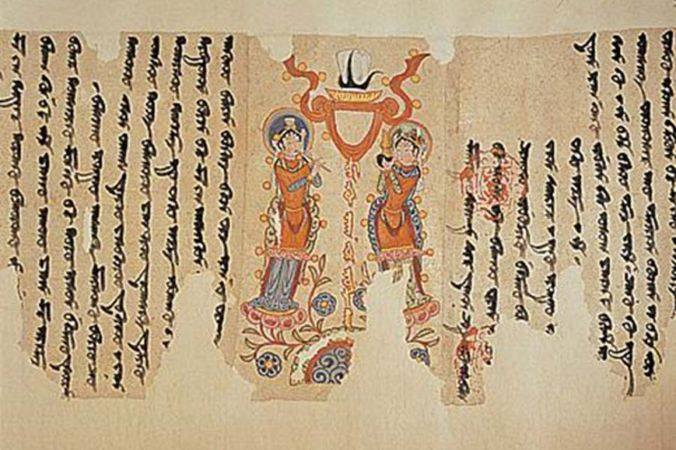 The Sogdian people of Iranian origin. They lived in the fertile valleys of Central Asia between the sixth century BC to the X century ad and were successful merchants. Building a city in the territory of modern Uzbekistan and Tajikistan, Sogdian merchants were active as middlemen in the trade on the Silk road.

Their legacy is preserved in the fragments of the records that have survived to the present day. Many of them are translations of Buddhist Scriptures. But there are also five personal letters that paint a vivid picture of the life of the ancient traders.

Five letters of Sogdian was discovered in 1907 by Aurél Stein, a famous British archaeologist, in the ruins of a Chinese watchtower Dunhuang (administrative and cultural centre of the modern province of Gansu). The tower is located on the Western approaches to the city, which was an important stop on the Silk trade route.

These letters are the earliest examples of Sogdian writing and provide very important information about the early history of the Sogdian Diaspora, settled in the Eastern part of the silk road. Some experts believe that the letter was confiscated by Chinese officials, who controlled the region. Others believe that they were left in haste by some merchant.

Each letter was folded and solved a few times on the outside were the names of senders and recipients. At least two letters were written in Dunhuang. The letters are believed to be carried by postmen from city to city.

In the first and fifth letter refers to commercial activities, they are written by merchants. The author of the second letter lived in Circene (modern Lanzhou in Gansu province), a town built between the southern mountains and Northern deserts. The author was a member of the Sogdian Diaspora in China and the representative of a wealthy Sogdian merchant in Samarkand.

In the letter he talks about the recent attack of the Huns on the Chinese city Ex and Luoyang. “The last Emperor, as they say, fled from Luoyang because of the famine and fire, his Palace was burnt and the city destroyed. Luoyang is no more and ECHA, too. […] And, gentlemen, if I wrote you how cost to China, that would be too bitterly. You will not get any income in Luoyang: the Indians and the Sogdians there had all died of hunger.”

The letter also expressed concern about someone’s money that the author took for safekeeping.

The fifth letter came from Gozzano, located to the Northwest of Luoyang. The recipient might have lived in Khotan, located in the southern part of the silk road, at the foot of the Pamir mountains, where the road leads to Transoxania oases between the Amu Darya and Syr Darya. The letter also describes the difficult conditions after the attack of the Huns. This author, it seems, was in a more difficult position than the author of the second letter, he complains that his trading partner had just abandoned him.

The first and third letters are different. They are written by a woman by the name of Mini (“tiger”), whose husband Nanidat left her in Dunhuang. The first letter addressed to the mother of the woman, the third, written in the name of Saint, and AnyDATA her daughter, and addressed AnyDATA. Both letters describe how, Mini and Saint lived in Dunhuang for 3 years, not having any news from AnyDATA.

Because they ran out of money, Mini asks him to allow them to return to her parents ‘ house, as a relative of her husband does not allow them to leave. Mini, writes that the priest promised to give her daughter a camel and accompaniment and begs them to return home. In the first letter, Mavni asks the mother if everything was okay and whether to accept the offer of a priest.

In another letter, Saint Mauni and say that if Nanidat not answer soon, his cousin sell them into slavery to the Chinese. It is possible that Nanidat died while traveling on a dangerous trade route. It is unknown what happened next with this little Sogdian family.

Much of what is known about the Sogdians, comes from the Chinese Chronicles, in which the “silk road” and “the Sogdian trade routes” are synonymous. Other references found in Greek, Indian, Arabic, Armenian and Byzantine sources. Sogdian merchants were selling musk, silver and silk and slaves. The Sogdian city-States like Samarkand and Bukhara were centers of culture, but was never very powerful.