Manufacturing A Massacre: The Armenian Pogroms in Baku 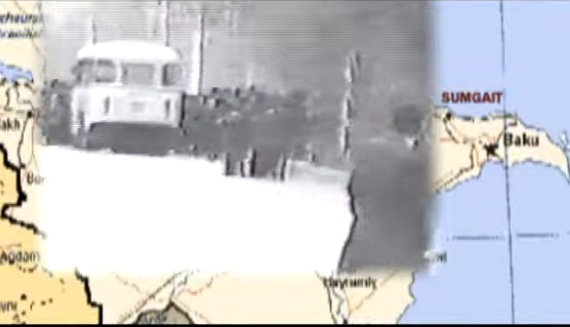 January 19 marks the end of the bloody Baku Pogroms, during which the Armenian population of Baku was ethnically cleansed from the Azerbaijani capital in a week-long bloodbath that left hundreds dead, thousands wounded and many more without homes. The campaign, which began on January 13, lasted seven-days until the Kremlin finally deployed Soviet Troops into the city to end the violence.

The pogroms, which resulted in the death of an estimated 300 Armenians, came as a direct response from Soviet Azerbaijan to the hundreds of thousands of Armenian demonstrators urging the Kremlin to allow Karabakh to reunite with Armenia in 1988. To quash the movement, Azeri OMON (special forces) units had begun a systematic pogrom of Armenia’s in Sumgait in 1988. Those massacres were followed by a series of similar assaults on Armenians in Kirovabad, Baku and later in the Shahumian district of Karabakh.

To this day the exact number of Armenian actually killed in Baku remains a mystery as no specific records were kept of the murders. The only solid statistics available are of the refugees. Baku was emptied of its entire 250,000 strong Armenian population within days. Leaving behind all their belongings to flee the carnage, most eventually found refuge in Georgia, Russia, Armenia and Karabakh. To this day, a majority of them still live the lives of refugees in Armenia and Karabakh.

The massacres of 1988-1990, were the latest acts of ethnic cleansing against Armenians in the area of present day Azerbaijan and Karabakh that began in 1905. The murders eventually escalated the situation into a war when Azerbaijani military forces invaded Nagorno-Karabakh to bring it freedom-seeking population under Baku’s control.