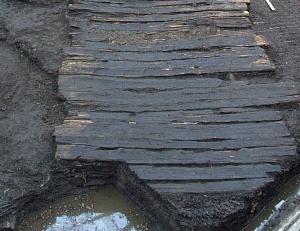 The Novgorod State Unified Museum-Reserve was told about the results of archaeological research at the Duboshin II excavation site in Veliky Novgorod.

Work lasts about a month and archaeologists have explored about a meter of cultural layer. To date, the head of the Center for the organization and provision of archaeological research of the Novgorod Museum-Reserve, Olga Tarabardina, has received dendrodates of some buildings, showing that the research is conducted in the deposits of the last quarter of the 14th century.

“This period of time in medieval Novgorod is characterized by a huge number of fires, when the houses of citizens burned almost every 7-10 years. Chronicle information is confirmed and materials of the excavation Duboshin II: almost all the buildings bear the traces of fire, “the press service of the museum-reserve.

Archaeologists note the high degree of comfort in the farmstead – almost a whole wooden excavation is carried out through the entire excavation: the length of the deck is more than 20 m, and the width reaches 5 m. Such decks illustrate the craving of medieval Novgorodians for cleanliness and order not only on the streets but also on the streets own city manors.

“A unique find can be considered a church – a wooden plaque for writing on wax with preserved fragments of wax, on which fragments of the text are read. By virtue of its safety and the original material, the ceramics have undergone initial treatment and are immediately handed over to restorers, “added the museum-preserve.

The restoration process is extremely complicated, since the thing consists of two different materials: the archaeological wax is extremely fragile, and the tree is highly saturated with moisture.