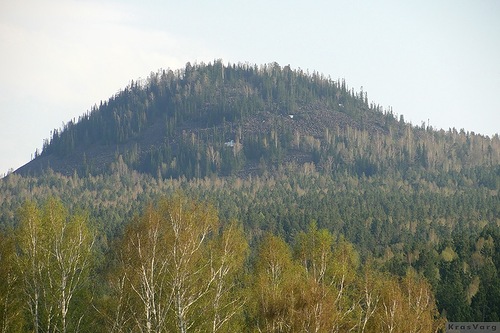 Archaeological studies in the vicinity of Krasnoyarsk began in the early nineteenth century. The initiative is credited with the Yenisei Governor AP Stepanov. He, by the way, in his work devoted to the study of Yenisei region, suggested that many large and small burial mounds left here by the people Chud. They later went West, where he came to live under the ground.

Puzzles have interested many, and the excavations carried away. The townspeople almost every house was a collection of daggers, knives and other antiquities, which are found in the area. Only on the right Bank of the Yenisei river, Krasnoyarsk, opposite from the island of Tatyshev to the village of Torgashino, there were up to 60 small mounds. Most, of course, then plowed and leveled.

To large mounds, mostly situated on the hills – Apostolski, Nikolaev, godfather-Tega, Drobinski, White pyramid, Black hill – was another concern. They do not always dare to disturb, because almost every were ancient temples. As they say, you never know!

Two hundred years ago, many travelers from different countries went to Siberia to study our land. It is a pity that the works of many of them still not translated into Russian language. In known works, the researchers not only talk about natural beauties, but also describe the various monuments: menhirs, petroglyphs, temples, idols. Retell the legends and myths of living of the peoples of the wonder discoveries of ancient sites from the Paleolithic era. Still, in these harsh lands 20-30 thousand years ago could live people?

And participants of the expeditions describe megalithic structures, which on the Siberian expanses could be seen everywhere. In particular, Friedrich von Strahlenberg made the assumption that the surrounding Krasny Yar (Krasnoyarsk), a hill composed of giant stones, with the traces of mechanical processing”. Confirmation of his release he received in what was then the capital of Siberia, Tobolsk. The local Muslim priest showed him a manuscript from Bukhara, which described the ancient state of Tartary, who occupied land in Western and Eastern Siberia. In the text it was reported that in this area many stone majestic pyramids in which they buried the rulers of the ancient state. It is possible that our Black hill is one of the monuments.

This amazing mountain is about 688 meters elevation above the sea level, has a few names. Because of the black stones on top of the Black hill. However, the Turkish Kara-Tag” is almost identical, after all, translates as “black mountain”. Occasionally you can hear other Snake hill and Bald mountain. Although, every year the hill more and more overgrown, so very soon it will no longer be called Bald.

It is known that it is an extinct volcano. But somehow, in GO and CHS it is listed as valid. After the great Patriotic war captured by the Japanese revered the Black hill. She must remind them of home the Fuji. 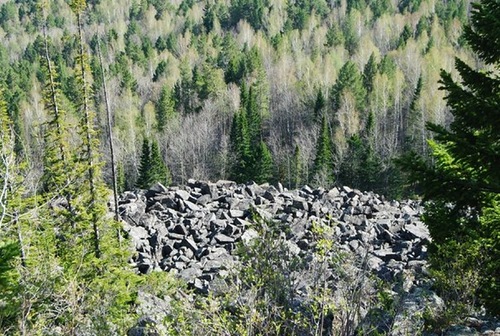 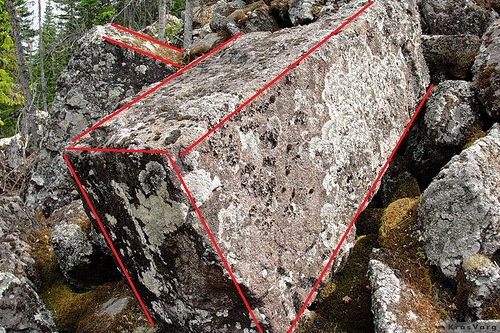 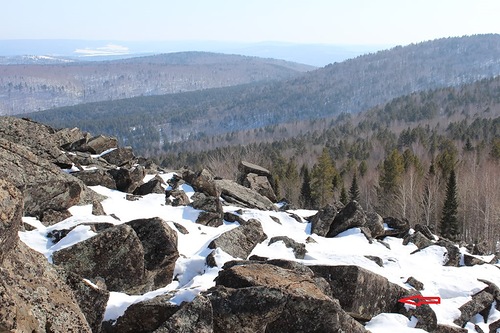 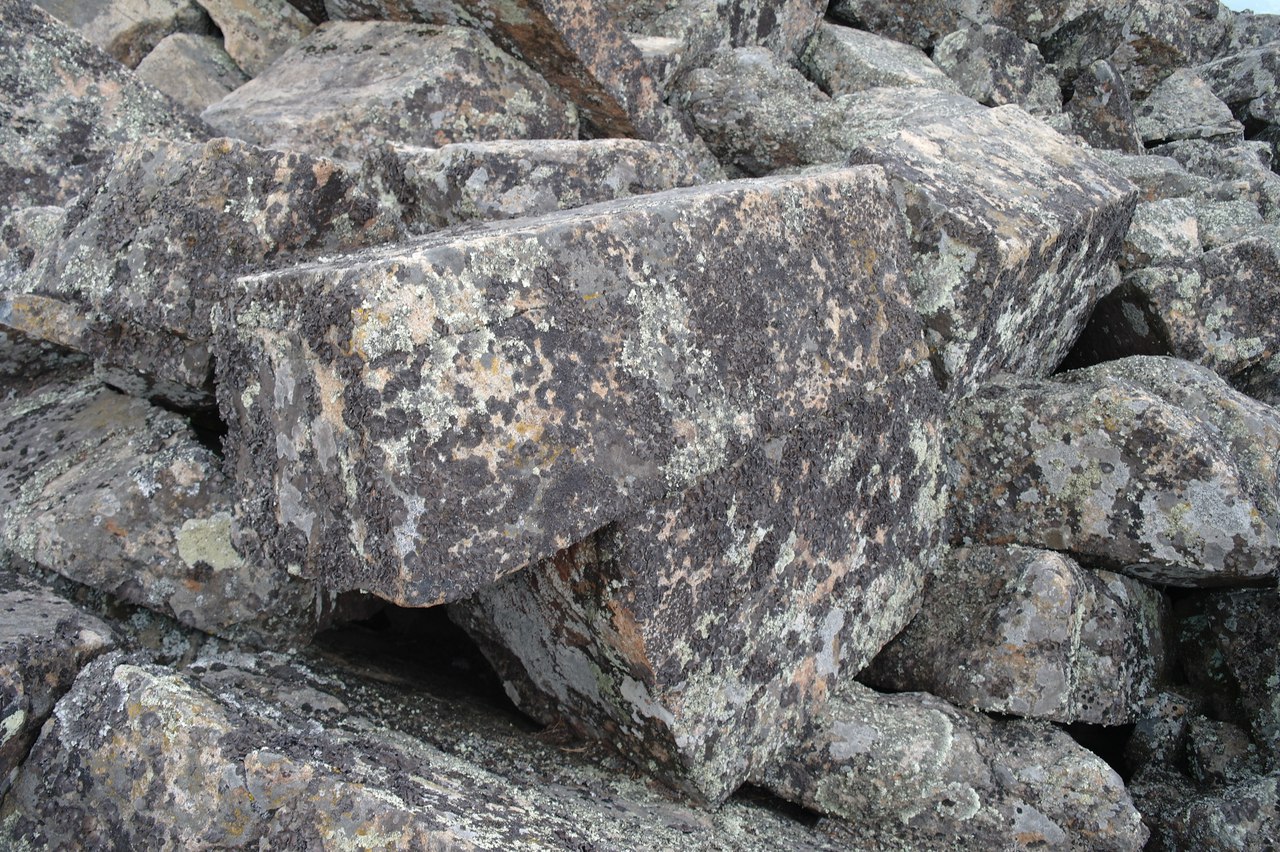 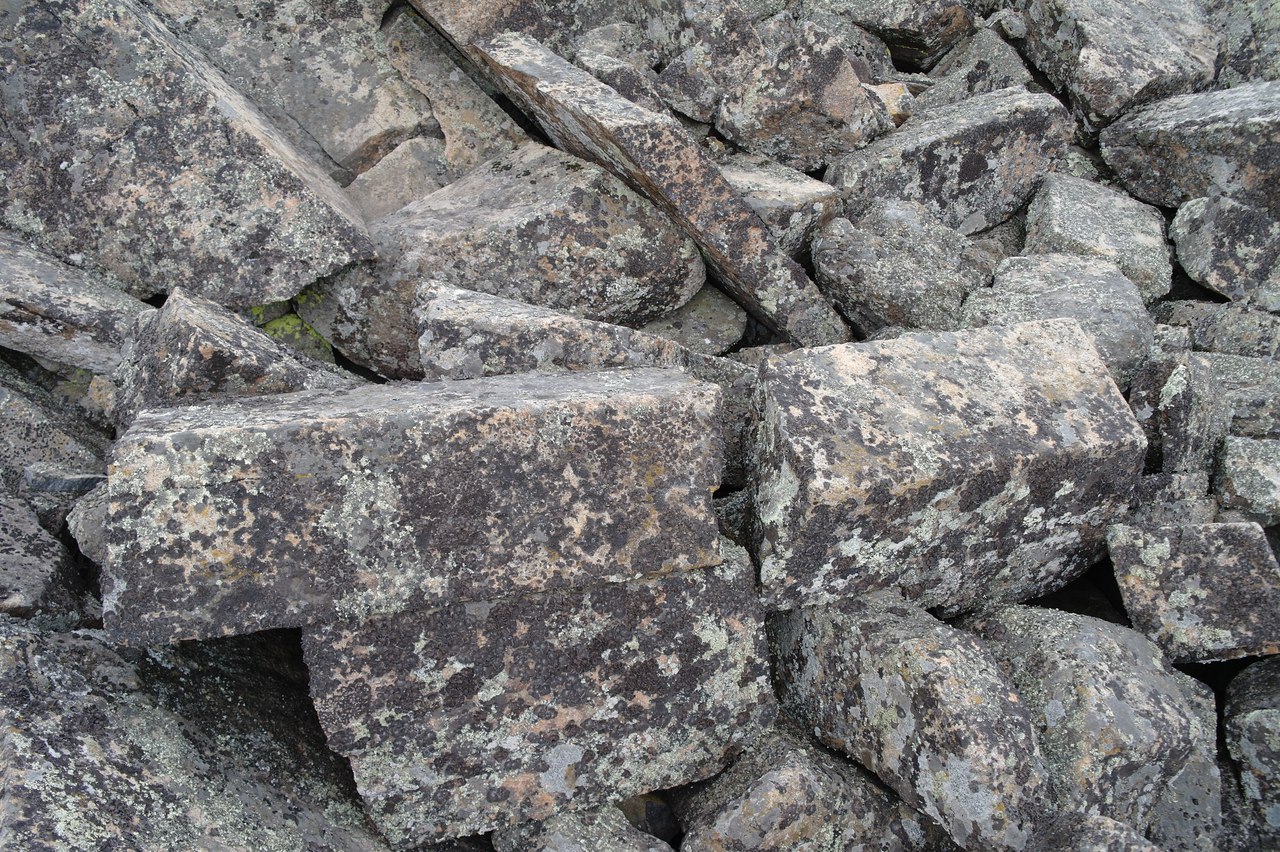 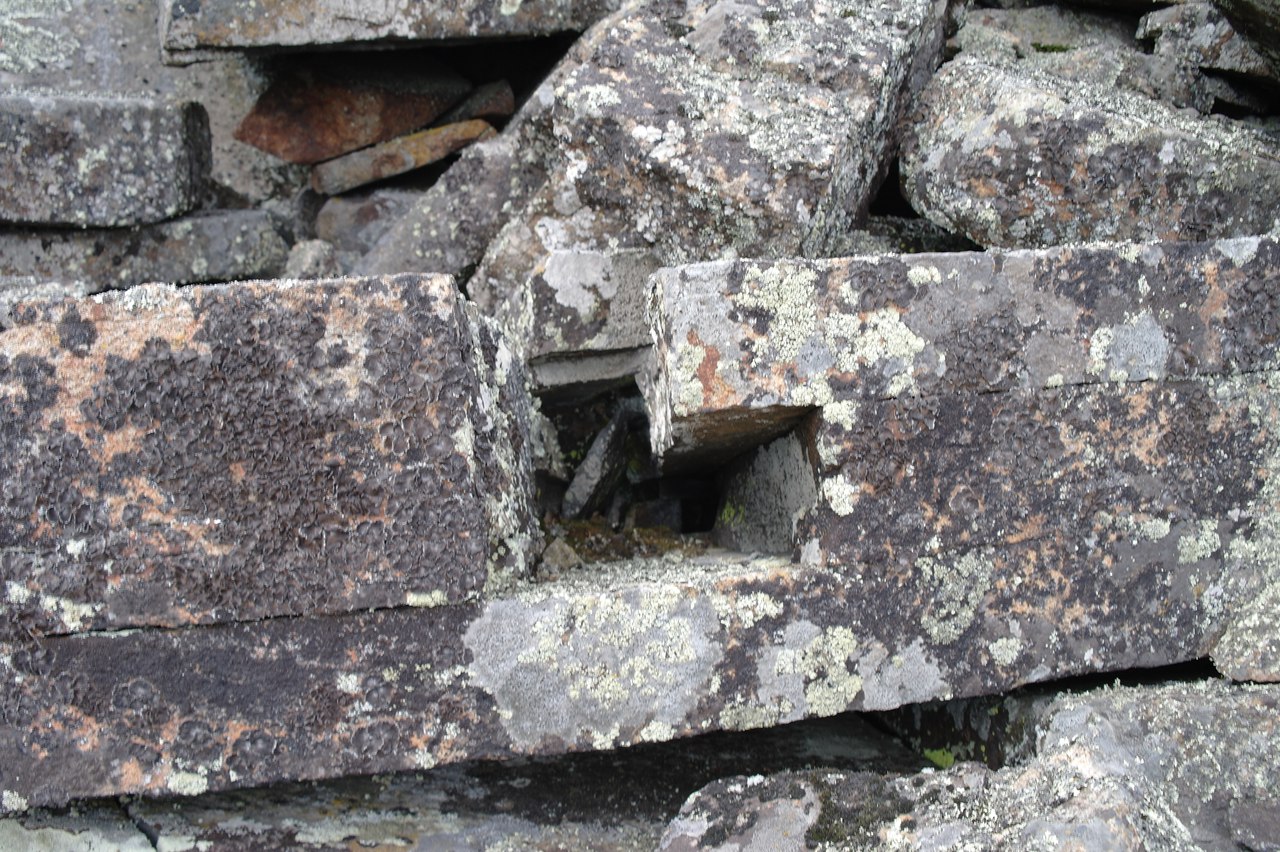 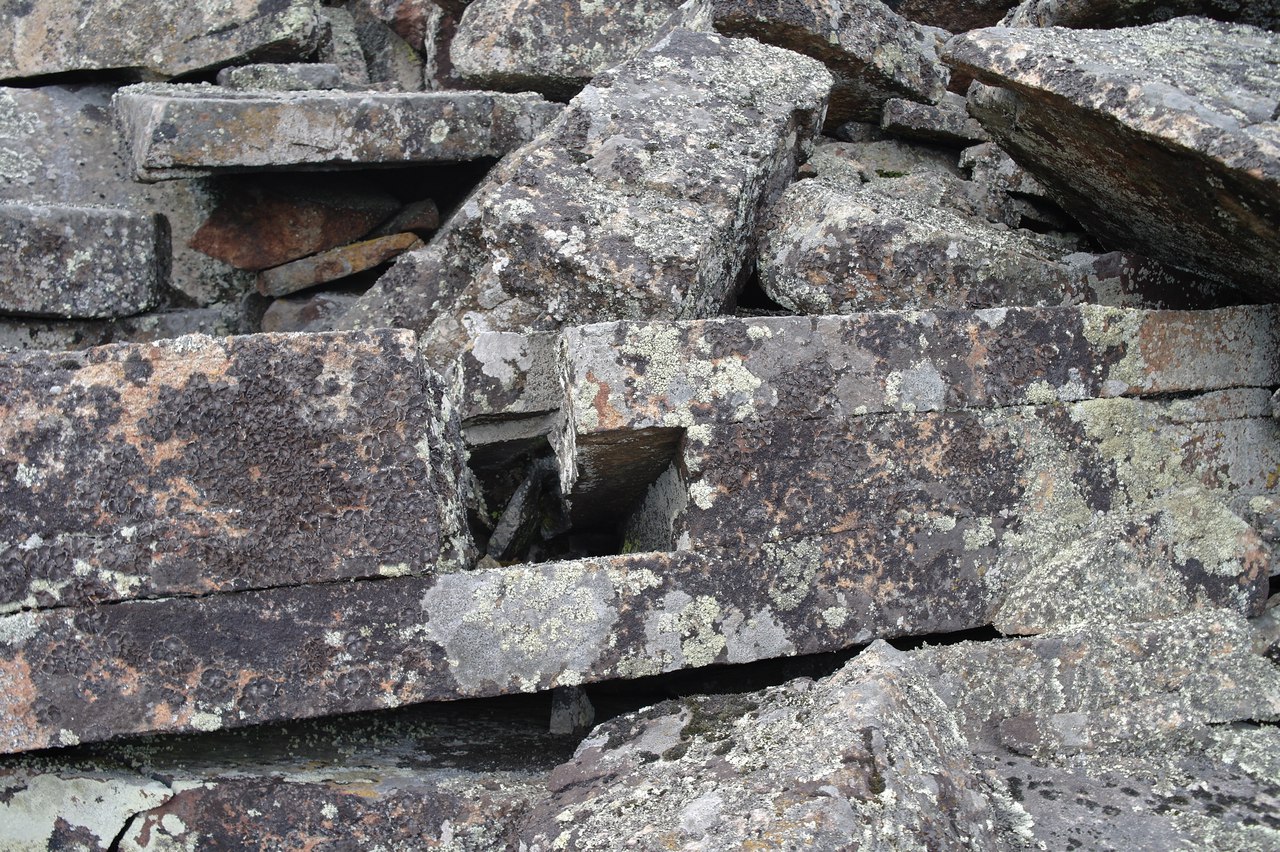 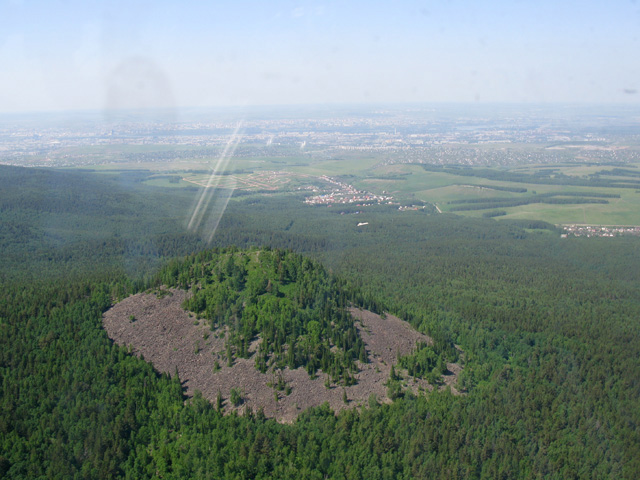 Rumor has it that there once was an ancient Park, and even say that dug a three-meter human skeleton.

In General, the hill is covered with legends. But what is surprising is that they resonate with the other myths of the Black hills, located in the Crimea – Karadag. In both cases tells that under the mountain is a sacred lake that guards the lizard-dragon. And laugh his unrequited love girl, the daughter of a local ruler. And at the foot of our Kara-Tag also have the healing streams from various diseases. And somewhere on the mountain is a walled up entrance to the ancient cave, only to find it can not.

Each year, local cavers go in search of this cave, but to no avail. However, it is unlikely they are looking for input, just such a tradition. Although small caves here.

Has its local legend, telling about the Shamanic tree, the Stone of desires and even tragic love Tansel, daughter kazinskogo Baia Sisak-ABA, a poor shepherd, Turan, slain opponent the son of Khan Ibrahim.

There is a legend about the treasure hidden in the heart of the hill robbers. Although they no longer tell you how to look for it is sheltered from the eyes of place on torgashinskaya cave ridge, focusing on the hill.

How many mountains of Siberia, the top of the Black hill covers kurumnik. Not something formed after some unknown explosion, not from eroded everything in its path the ancient flood.

Huge black megaliths like scattered on top. Immediately apparent rectangular blocks, some with triangular and square holes, some mechanical treatments. In this case, the megaliths not only from Partita, but diorite – one of the hardest stones. If you knock on it with a stone, then heard a metallic clink.

Rumor has it that in the early 1980-ies a group of archaeologists conducted a study in the area of the hill. They recorded a strange increase in background radiation, maybe because of the geological fault. And also suggested that the top of the Kara-Tag is man-made origin.

The hill is located at the intersection of the Altai-Sayan mountain taiga and forest steppe of the Krasnoyarsk basin. Its summit offers a great panorama of the city, the majestic Yenisei river in the spurs of the Yenisei ridge, some cliffs of the Stolby nature reserve.

Despite the fact that Black hill is the highest “pyramid” near Krasnoyarsk, she was not lucky. It is in the valley of Giza, archaeologists therefore you will not see here, like the other expeditions. Meanwhile, in rounded form, this ancient volcano is sometimes compared with Photoskim the crater.

Being near a major city, the mountain remains “untouched”. Although increasingly talking about the powerful energy at the top of the hill, it is associated with a place of power and these tend to fall psychics and ordinary people to get a boost of energy.

It can be assumed that this fantastic mountain was once sacred. Think the foot will be able to find a lot of ancient tombs or camps. It would be the desire to discover the secrets of the Black hills. And to understand what it’s for megaliths.