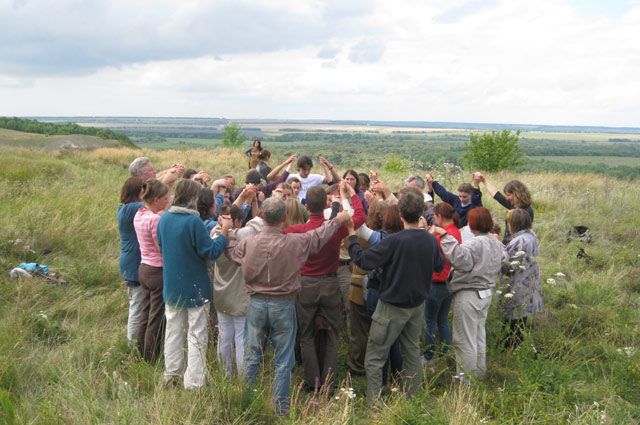 It is a lot of secrets and riddles the Voronezh earth stores in itself. How many civilizations were replaced here in millennia. And everyone left behind a trace. Among archeologists the system of mountain chalks found on one of ancient settlements near the village of Korotoyak called by “the Mostishchensky labyrinth” causes much controversy. What was it it? Sanctuary, ancient observatory or cult platform?

Some call six stone rings dug to the earth a magic labyrinth and therefore come to the Voronezh region to be loaded from it with energy.

Many remember the myth the Minotaur or heard about the well-known English Stonehenge. Meanwhile, quite perhaps, we have the labyrinth also, absolutely near Voronezh – in Ostrogozhsky district, near the farm of Mostishche. Who and for what created this miracle? And whether it will be possible to find the answer at least to one of its many riddles? 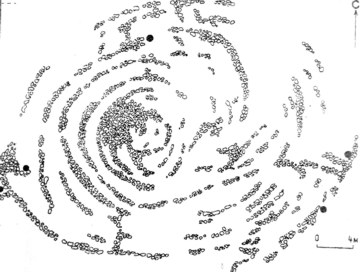 The farm of Mostishche was stretched between three cretaceous hills. From tops the view of the valley of three rivers – Dona, Potudani and the Maiden opens surprising beauty. Such places since ancient times attracted to themselves people. Around – the woods rich with production, abundance of fish and free pastures. And if to fill a shaft, to establish a paling, the settlement on the hill will turn into reliable fortress, unapproachable for unfriendly neighbors.

It is no wonder that archeologists noticed this place long ago. In 1957 the expedition of Institute of archeology of Academy of Sciences opened the ancient ancient settlement of an era of the Scythians who located in the South Russian steppes in the 6-4th centuries BC on the central hill.

And in 1983 the archaeological expedition of VGPU under the leadership of Arsen Sinyuk found traces of more ancient tribes inhabiting these places in the III millennium BC. From that era remained a little – a congestion of stones. But soon scientists understood that these stones are not scattered in a disorder at all, and form six concentric rings ellipses. Then the courageous hypothesis was born: an ancient construction – no other than a labyrinth, single in a midland of Russia.

The ellipse of a labyrinth is extended on the line the northeast – the southwest, external borders of a construction make 26×38 m. The majority of stones – cretaceous, but meet also granite boulders – breed, not the characteristic of these places.

For what this unusual construction was constructed? Researchers agree that the labyrinth could be an ancient sanctuary. At the same time there is a version and about its astronomical appointment. The matter is that granite boulders legiblly specify the direction to the north, points of rising and sunset in days of summer and winter solstices, spring and autumn equinoxes.

Arsen Sinyuk believed that the sanctuary was constructed by representatives of so-called ivanobugorsky archaeological culture. For the first time its traces were found on the Ivanovy Hillock – from here and the name. Ivanobugortsa were forest hunters and fishers and at the same time communicated with the population of the steppe. The people were very conservative, did not use achievements of neighbors and even in a bronze age kept a way of life, the characteristic of the Neolithic – the new Stone Age. Except as in Mostishche and on the Ivanovy Hillock, this culture does not meet any more anywhere.

And nevertheless the fact that the mostishchensky find represents a labyrinth – only a hypothesis. The trouble is that the monument reached us strongly destroyed: still Scythians began to take away stones on building materials. Though passed 2,5 thousand years, confidence that our contemporaries will make thrifty use of a construction more since then, at archeologists is not present: as a result it was decided to dig ancient stones again. The tourist will not see in this place anything, except the hill which overgrew steppe herbs.

Nevertheless the hill with the labyrinth buried in it is very popular today and, first of all, with the enthusiasts who are carried away by searching of the paranormal phenomena. According to eniolog – supporters of the theory about power information exchange at the thin level, – the Mostishchensky labyrinth represents the “place of force” having a special power engineering.

“Radiation of a labyrinth is felt apart to 2 km and covers nearby settlements, – Alexander Sukhorukov, the chairman of committee on studying of the abnormal phenomena in the nature tells. – Being in epicenter, people feel a sleepiness, slight dizziness, a pleasant pricking on all body, especially along a backbone, and enter a condition of euphoria, a superactivity, processes of improvement of an organism join. There is a mild rocking. All this can even be followed by visions. It is important to leave a resonance, a power engineering the very strong in time. After a while after relaxation there comes the condition of a superactivity”.

The labyrinth gained even the international popularity. So, here to group meditation there came tourists from Germany. According to the German admirers of esoterics, Voronezh and 100 km around the city – “cardiac chakra of Europe”.

“I not really trust in it, but megaliths, really, have surprising power properties”, – Alexander Sukhorukov says.

Whether we something learn new about a labyrinth and its builders? Or the cover of the millennia forever hid from us the truth? The archeologist Valery Berezutski, one of openers of a labyrinth, optimism does not feel.

“All square occupied with stones is already explored, – Valery told. – Besides not all researchers consider this construction a labyrinth. I have doubts also. For example, we dug out as it seemed to us, one of labyrinth rounds, and then it became clear that it is a natural exit of a chalk. In archeology so often happens. Perhaps, this opening. And, maybe, and irregularly understood object. Complexity is that after ivanobugorets there lived, at least, two-three people. Only from Scythians there were 126 economic holes which are cut down in chalk. And to catch among a heap of stones a labyrinth very much and very not easy”.

The archeologist is skeptical too about the fact that the pilgrimage in Mostishche spins up every year.

“Yes, I communicated with people who say that to them on this place energy flows, – Valery Berezutski says. – Perhaps, it and truth. But there are no guarantees that it goes from a labyrinth”.

In a word, to trust in a labyrinth and its magic forces or not, everyone solves. The proofs capable to convince the stubborn skeptic will be it is unlikely found. Enthusiasts have enough also the friable hypothesis opening a scope for imagination. Anyway, it is important that one more secret awakens interest in stormy past of forest-steppe open spaces of the Voronezh region.