Mysteries of the Israeli megalith “The Wheel of Spirits” 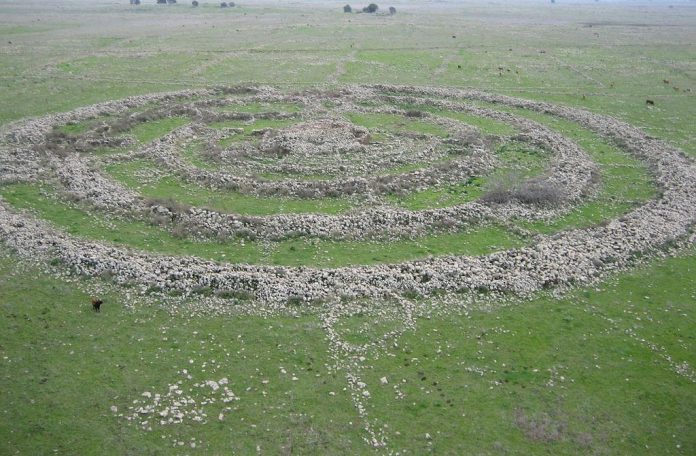 In the center of the Golan plateau, about 16 kilometers east of the northern extremity of the Sea of ​​Galilee, there is the only megalithic complex in Israel that has no analogues in the world.

Arab residents called it Rujum El-Giri (Wild Cat Hill), and in Hebrew it was called Gilgal Rephaim. The widespread translation of Gilgal Rephaim into Russian – the Wheel of Spirits – is not entirely accurate. The word “rephaim” has two meanings in Hebrew: spirits, ghosts, but also the ancient people of giants, referred to by the TANAKH as the indigenous population of the Golan Heights. It is in this second meaning that the word is used in the name of the megalith: The Wheel of the Rephaim. However, the Arabic name is most often used.

Rujum El-Giri is an artificial stone mound around which 60 tons of basalt blocks are laid out in three concentric circles. Archaeologists date this structure to the third millennium BC.

According to the Israeli researcher Yoni Mizrahi, the construction of such a structure required the daily work of 600 workers for six years. What was the purpose of such a huge amount of energy and labor? There are no unequivocal answers, but there are enough different versions and conjectures. Archeology puts forward three possible explanations:

In 1990 in the central barrow was found a crypt full of precious ornaments. It seemed that the riddle was solved! But, as it turned out later, the crypt is about a thousand years younger than the megalith itself. In addition, the theory of burial does not explain either the size of the structure or its shape.

The most pervasive parallel with Rujum is the notorious Stonehenge. The functions of the most famous megalith in the world are known no more than about Rudjum El-Giri, but the most popular theory to date connects it with the Druid observatory, so this explanation lay on the surface.

The researchers found that during the summer solstice, the sun’s rays had to pass between two vertical stones in the eastern side of Rujuma. However, attempts to find the same place where the sun’s rays passed on the day of the winter solstice have not been successful.

A classic excuse for archaeologists, when one does not want to admit that there is no explanation. There is nothing to prove. Whoever says that this structure was not used for religious purposes – let the first throw a stone at me. The most interesting, however, is that such an explanation is often correct.

In general, it must be said that archeology with its functional explanations is too one-dimensional and is unlikely to ever provide an exhaustive explanation for the existence of megaliths. English researcher Paul Devereaux, who has been studying the megaliths of Western England, Ireland and Brittany for many years, uses a complex method: involving, in addition to archeology, astronomy, geometry, ethnography, bioenergy, he tries to understand the megalithic object in the wide context of the locality in which he is located. It is probably worth considering Rujum El-Giri in conjunction with the surrounding dolmens. It is necessary to check its orientation not only by the sun, but also, for example, on Mount Hermon, and even on Mount Tavor (Tabor) – both peaks are within sight, and both of them have been attributed to sacred significance since ancient times.

A holy place is never empty, and when archeology does not give unequivocal answers, various alternative theories flourish, among which there are absolutely wild ones, such as a landing pad for a UFO or grave of Goliath, and quite serious and interesting.

So, for example, it was noticed that Rudjum resembles a mandala in form.

Recall that the mandala is a sacral symbol used in Eastern (Indian) religious practices. For all the infinite variety of forms, the mandala can be defined as concentric figures grouped around the center. At the symbolic level, the mandala represents the visual expression of the struggle for order, the desire to reunite with the original center. In the light of this symbolism, one can consider the recently discovered fact that Rujum El-Giri is a labyrinth leading to the center.

According to Jung, the mandala is an archetypal symbol of human perfection. With its light hand, it is used in modern psychotherapy as a means for completing the comprehension of one’s own self.

Mircea Eliade considered the mandala as Imago Mundi – the Image of the World. He also argued that megaliths are associated with the perception of the sacred space as the Center of Peace – a special place that allows you to establish a connection with the Sky. In this regard, it is appropriate to recall the sacred city of Benares for the Hindus – the place from which, according to their beliefs, the universe appeared, and where it will return at the end of time. And also a more similar example is the perception by Judaism of the Land of Israel as the center of the world. In the center of Israel is Jerusalem, in the center of Jerusalem is Mount Zion, in the center of Mount Zion – the Temple. The center of the Temple itself was the Groundstone, it is also the Pup of the Earth. If we try to depict this graphically, in the form of concentric circles that diverge from the center, we get … a mandala.