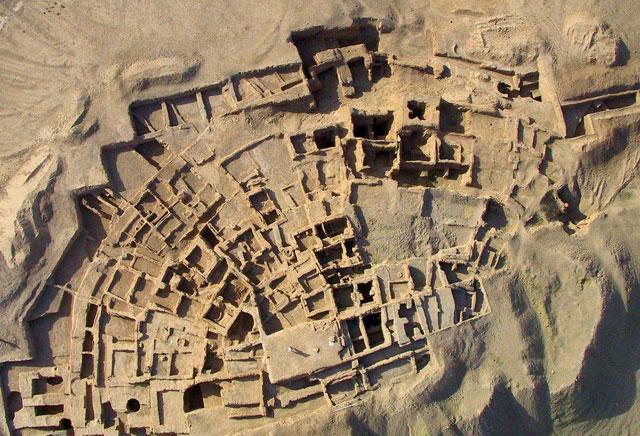 In Syria, where once was located in Mesopotamia, Russian archaeologists found the unique religious city, perhaps the most ancient on Earth. Residents have preserved it to the best of times, as if hoping in this way to pass on some valuable knowledge.

The Tigris and Euphrates consistently attracted the attention of archaeologists and historians from around the world. This is no accident because it is believed to be about 6 thousand years ago there was the first civilization: the first cities and first States, writing, ceramics, etc. unfortunately, most of the historical monuments testifying to the life of ancient people in Mesopotamia has survived in a badly damaged condition. The most severe drought, dust storms and winter rains have done their destructive job – city almost did not survive. However, luck smiled to the Russian archaeologists. In Northern Mesopotamia, in the Syrian valley of the khabur river, the expedition under the leadership of corresponding member of RAS, doctor of historical Sciences Rauf Moncheva found an unusual village, perfectly preserved since ancient times.

…Endless road stretches across the Mesopotamian steppe, which is periodically crossed by dry river beds. Involuntarily looked around, and it’s hard to believe that the farmers cultivated the fertile fields, collecting a few cereal crops in the year. Where is now your only refuge is unpretentious lizards and Scorpions, was green meadows. They were grazing herds of domestic animals. And yet it seems less likely that there could be comfortable enough to live.

That this land was once a living Paradise on earth, now resemble towering over the desert hills, early representing a blooming city. Senior researcher of the Institute of archaeology RAS, doctor of historical Sciences Shahmardan Amirov says that the hills, or in another telly, was formed here for many hundreds of years. It happened like this: one and the same place, people have built buildings of Adobe brick, old buildings collapsed, and on their ruins were built new. One of these hills was chosen for studies of the Russian archaeologists. Tall height of 17 and a diameter of 200 meters, scientists called khazna named located near the village. Imagine the surprise of archaeologists when they discovered an amazing thing: the settlement was practically destroyed, and like specifically covered from time to time. This safety architecture is extremely rare for Mesopotamian archaeology. The ancient people to have something done a great work on preservation of the settlement. They carefully dismantled the wooden beams of the roofs and covered all the buildings to the ground. Thus, the city was untouched for many centuries, no natural disasters could not destroy what we have built. Reverent attitude of the ancient inhabitants to their settlement made archaeologists think about his exclusivity. Probably, it had some special meaning for the residents of the neighborhood.

On the ancient streets

Carefully digging out the nooks and crannies of the ancient city, the archaeologists has never ceased to be amazed by the monumentality of its architecture. The settlement was surrounded by a massive wall, a bypass width of about two meters and a height of six meters. The fact that it was an extraordinary city, the scientists realized, clearing more than half of the tell – and that’s about five thousand square meters. It became clear that the settlement consisted largely of religious buildings. 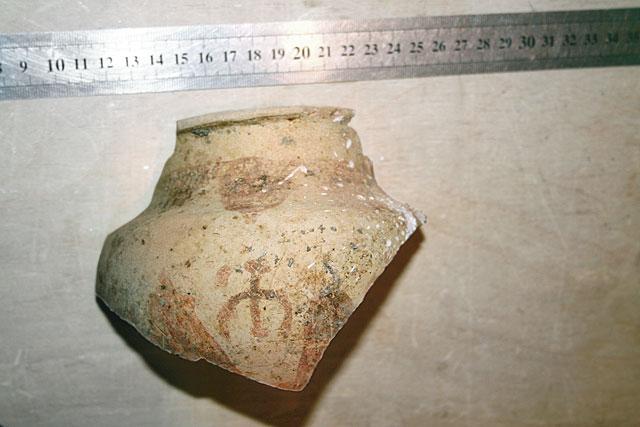 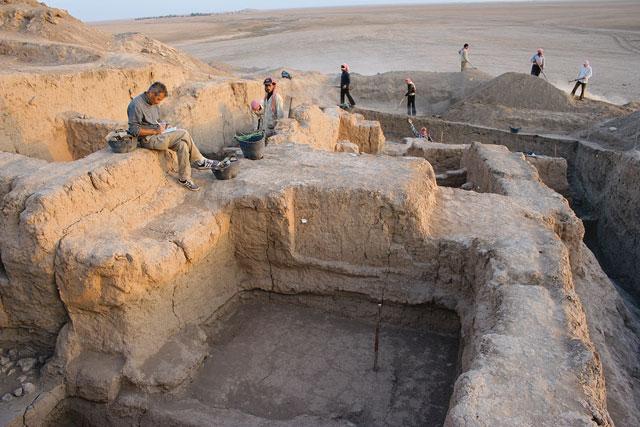 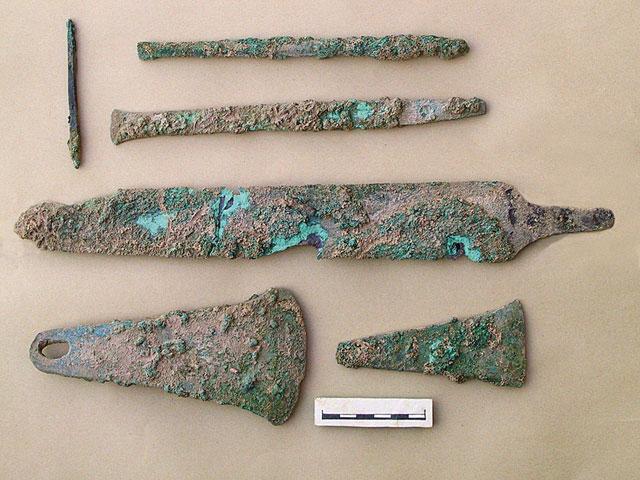 Hasni layout resembles an oval that enclosed the buildings, facing South. According to an ancient road running along the bed of a dry river, we passed an ancient well and the same well-preserved Potter’s kiln, then pass over the wall. About it there is some sort of altar, in which was mounted the skull of a bull.

Rising on the inclined ramp walkway leads inside grandiose religious (prayer) tower of the ziggurat. Archaeologists believe that this is the first among similar facilities in the North of Mesopotamia and one of the oldest ziggurats in the world. From the tower is paved with shingle pathway leads to the Central part of the temple complex, where, as the researchers suggest, could be the main temple building.

Archaeologists suggest that the main street at one time held the funeral procession, and some rituals were conducted in a certain established order.

The building of the temple complex is characterized by its monumentality. The facades of the buildings are decorated with pilasters. The so-called upper temple was almost completely covered with ashes, among which he found many fractured clay figurines of sheep and bulls. As suggested by Shahmardan Amirov, fly ash, filling some place of worship was kept as material evidence, the report before the gods brought about his victims. Note that the farmers of Mesopotamia did not sacrifice people, but among the nomadic Semites, the firstborn was intended to God.

In exchange for sacrificial offerings to a higher power, apparently, gave to the people the grain was the main food in those days and was considered sacred.
About dominant, iconic roles in the cereal of life of the inhabitants Chasny says that along with temples and religious towers, the city built huge granaries, which had a dual significance – economic and religious. The tower is preserved to its full height – 8 meters, but inside, their depth is 14 meters. And if the surface of the earth hot summer air burns all alive, inside this tower, even in our days the tooth on tooth from the cold.

Archaeologists believe that the town lived only about 120 people. Most likely, in the cult complex was located to the clergy. The researchers found that by the end of IV – beginning of III Millennium BC in Northern Mesopotamia ripe conditions for the emergence of statehood. Most likely, the settlement type Hasni originated some semblance of estates, the representatives of the upper classes belonged to subartu – a little-known people. Construction was dealt with ordinary people from the surrounding villages. The importance Hasni shows the power of the buildings. It would seem that the farmers, whose life was full of worries about food, have to spend all day in the fields. But they found free time to tirelessly work on the construction of a cultic center. And, most likely, they did so voluntarily, paying tribute to the sacred bread.

The priests worked in the Khazneh not only the performance of ritual ceremonies. Judging by the finds, found in tell at almost every turn, there was also a kind of scientific center. In an era when the nature of the cosmos was deified, their study was a duty, but because the priest was both the Keeper of scientific knowledge, and an inquisitive Explorer. The development of technology reached in the Khazneh at the turn of IV and III Millennium extraordinary heights. Members of the Russian expedition even suggest that it was invented here first wheel, and then the chariot. Apparently realizing the importance of discovery, the residents Chasny in a large number of the clay models of their know-how, hoping thus to pass on priceless knowledge. In addition, Khazneh, according to Russian archaeologists, was invented pottery and personal seals. Here were laid the foundations of mathematics: with special plates that people made calculations. The wisdom of the inhabitants and founders of Chasny is the fact that it is the oldest known cities built on a common architectural plan. Here for the first time began to build square houses, and there was such a concept that we today call aesthetic forms. If the ancient artisans made statues of women, shapeless, that which is found in Khazneh figures already meet modern concepts of beauty.
At the same time, some of the mysteries left by people of the city churches, is not yet solved. For example, it is unclear why from the center of tell street in all directions differ by certain rays like the sun. Perhaps this is a coded message about the structure of the Universe. What if something further is encrypted not only in the planning of the city, but the location of houses, temples and walls?

Everything comes to an end

As so often happened with other civilizations, once khazna empty. Several years of drought have depleted grain reserves, and people were forced to move to other, more suitable for agriculture and living space. This happened around the beginning of the third Millennium BC. Conserved sacred city, the people went to the North. However, what is striking Hasni story did not end there. After some time, people tried to return to their homes. But not for long. Their existence at a late stage in life settlements, according to archaeologists, it was much more scarce in the spiritual and in the material. They are now huddled in small rooms and trampling shrines, even used religious buildings. Apparently, this disrespectful attitude was not to the liking of the gods, giving the grain, and about 2650 BC again broke the drought, which forced the townspeople again to lay Hasno the ground and walk away. Now, and forever.