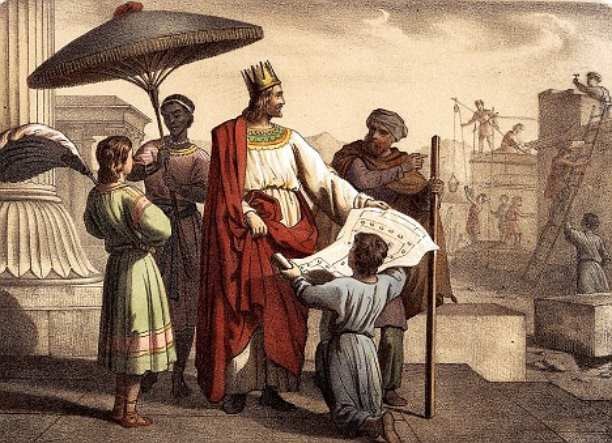 About the biblical king Solomon in the Ancient world there were a lot of legends. They all agreed on the fact that during the reign of the wise king there was peace and prosperity between Egypt, Israel and Mesopotamia.

During this period of prosperity, in 950 BC, Solomon began building the temple, which subsequently became famous for its splendor and beauty.

At the beginning of the construction of the Royal engineers are faced with a daunting task: how to build a huge building, without touching the stones, no iron tools?

The fact that Solomon, mindful of the words of Yahweh, spoken once to the prophet Moses on mount Sinai (“And make there an altar unto the Lord thy God, an altar of stones, not raising them iron”), ordered to build the temple, not touching it with the iron, so as not to desecrate it.

Looking for a tool

The legend tells that the wise men pointed out to Solomon for precious stones in the breastplate of high priests. These gems were cut and polished kind of tool, even more solid than they are. Shamir – as it was called. Shamir was able to cut that did not yield any iron.

Because the priests themselves did not know anything about the stones, Solomon summoned the spirits, and they opened the way for him to Shamir and said that Shamir is… a worm no bigger than a barley grain, but has such power that it will not withstand even the hardest stone.

The old Hebrew dictionary explains the word “Shamir” of Egyptian origin. In the Bible it means nothing, like a diamond, which seems quite natural. However, archaeological materials it is known that the cutting tools the ancient Egyptians were only available crystal quartz (or rhinestone). They did not use a diamond because nothing about him know.

However, in the beginning of the XX century in the village of Abusir on the left Bank of the Nile, archaeologists have unearthed the remains of the pyramid of Pharaoh Sahure, who ruled during the heyday of the old Kingdom (about XXV century BC).

In extremely hard stone rocks (granite, basalt, diorite, whose hardness on the Mohs scale: 8.5 out of 10), from which was developed the pyramid, the researchers found exactly drilled holes, made at the same angle. There are over 30 such drill holes.

Following the example of their ancestors

At the same time the British archaeologist Flinders Petrie drew attention to the stone carving techniques of the ancient Egyptians. “When drilling granite, wrote Petri – drill operated load is not less than 2 tons as the granite core the spiral step risks left by the cutting tool, equal to 2.5 mm at the circumference of the hole 15 cm… Such a geometry of the spiral grooves cannot be explained by anything other than a drill feed under a huge load…”

Thus, drilling in Abusire, that is, the drilling of rock, can only be explained by the use of technology similar to ours. But to do this could not even the most skilled drillers of Ancient kingdoms, because they are used only by tools made of copper, hand drill and chisel.

But no doubt: to perform complex drilling operations used some specially designed for this technique.

Petri’s no explanation to this puzzle. Also he could not explain how the tool was carved hieroglyphs on diorite bowls of the fourth dynasty (age of about 5 thousand years), which he found at Giza.

Image Shamir in the form of a worm eating rocks

In the Egyptian Museum you can see a large number of vessels belonging to ancient times and carved from the solid rock. Over 30 thousand instances of stone-ware was found under the step pyramid of Djoser at Saqqara (jugs, vases, plates and other utensils). Found the vessels demonstrate the highest quality.

But not yet invented the tool that would cut vases of this form, because it needs to be narrow enough to fit through the neck, and durable enough that they could handle the inside shoulder and the rounded radius surfaces.

Today, traces of the “divine tool” found in other cultures, but it is unlikely we will be able to understand what he was actually, for doing the work, as a rule, the master takes the instrument with him…