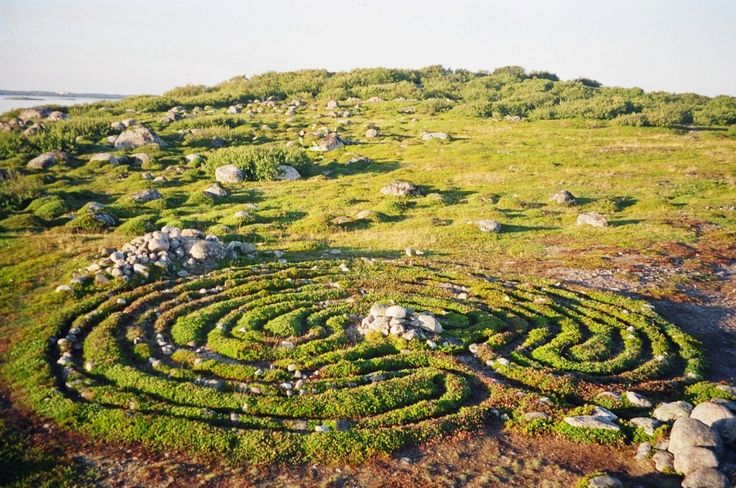 A labyrinth is both a puzzle and a symbol. Entangled paths, leading either to the exit or to the dead end, appeared thousands of years ago: both in the form of images and as structures. In our collection there are 10 labyrinths, which contain secrets to this day.

Do you know that there are two kinds of labyrinths? The most ancient belong to the so-called unicursal labyrinths, that is, having a single entrance and only one track leading from this entrance to the center; There are no deadlocks in such labyrinths. Another kind of labyrinths is multicursal (in English for it there is a separate word, “maze”). One of our heroes of today is relevant to the latter type. Guess who!

Labyrinths on the Big Hare Island. The largest in the world a cluster of Neolithic labyrinths is on the Solovetsky Islands – 35 labyrinths, which in the local dialect are called “Babylons”.

The most famous are labyrinths of the Big Zayatsky Island. All 14 labyrinths – round or oval, with a diameter of 6 to 25 m – are concentrated on a small area of ​​0.5 sq km on the western side of the island. The rows of spirals, of which the labyrinths are composed, resemble a snake with a head in the center of the structure. On the east side of the island are also many different piles of stones and boulders, but none of them is a maze.

There are two main versions about the assignment of labyrinths. The first relates them to ancient rituals, the second suggests that the labyrinths served as a kind of complex trap for catching fish – at the time of their creation, the sea level was much higher.

Labyrinth as a link between Greece and India. In August 2015, archaeologists said that the labyrinth found in India, about 2 thousand years old, is identical to the labyrinth depicted on ancient Greek clay tablets dating from 1200 BC. (Ie 800 years younger than Indian). The Greek labyrinths found during excavations of Pylos were considered to be the most ancient images of labyrinths in clay.

The Indian labyrinth is located in the city of Jedimedu (Tamil Nadu) and is a square, each side of which is 17 m. The length of the labyrinth paths varies from 0.8 to 1.1 m. The discovery of the labyrinth was made during excavations on the ancient trade route connecting the cities Azkhagankulam (Tamil Nadu) and Palakkad (Kerala). Terracotta lamps and semiprecious stones, found near the labyrinth, indicate the former wealth of the region. Labyrinth Jedimedu is the second largest in India. The largest archaeologists found in the same state of Tamil Nadu in 2014. In India, by the way, it is still customary to depict labyrinths in one’s own house – they possess magical power, protecting the dwelling from evil spirits. 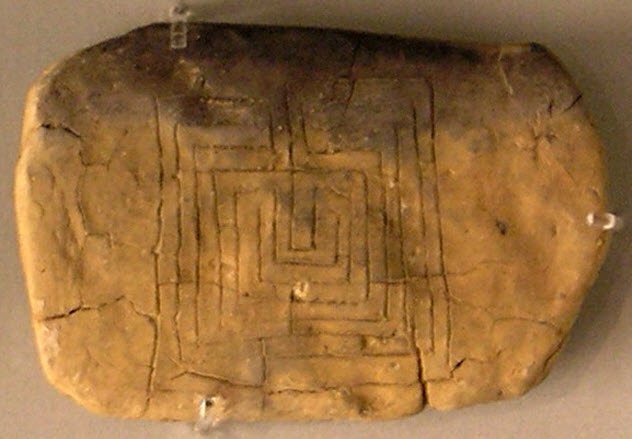 Labyrinth in the Cathedral of Chartres. For 2,5 thousand years Chartres was one of the most sacred places in the territory of modern France. First it was worshiped by the Druids, later on the same site Christians built the cathedral. Celtic priests believed that this earth emanates special energy, and revered the underground waters of this territory, believing in their healing powers.

One of the main attractions of the city of Chartres is the miracle of Gothic architecture, the cathedral of Notre-Dame de Chartres, the construction of which began in 1194 and lasted 25 years. In 1205 a labyrinth was created inside the cathedral from ancient stones. The total length of the labyrinth is 294 m, and the diameter is 13 m. Monks and pilgrims still pass through this path.

Exact data (and even more or less confident assumptions) about the purpose of building a labyrinth is still not there. There are suggestions that the labyrinth became a kind of grave for the masons who built it, but so far this version has no evidence. 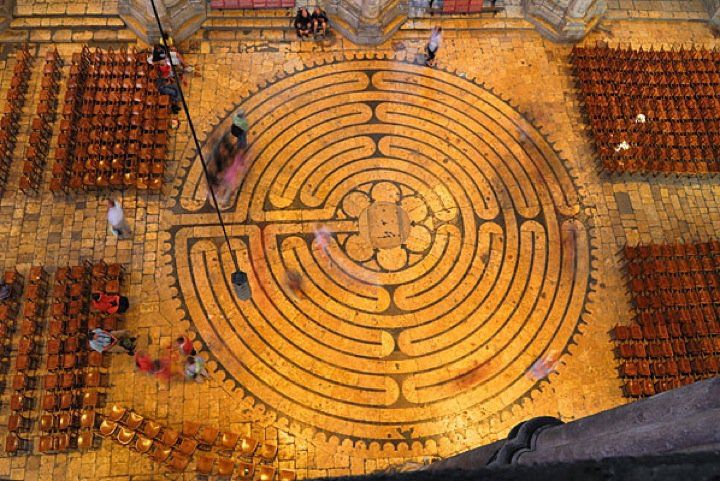 “The man in the labyrinth.” Indians of the Southwest of North America believed that some tribes (Papago and Pima) appeared thanks to the deity I’itoi. Traditional for the peoples of Papago and Pima, the motif “man in the labyrinth” depicts the deity I’itoi at the entrance to the labyrinth, which symbolizes the cycle of life and the choices we make. This labyrinth, widely distributed among Indians, consists, as a rule, of 7 circles. The circle itself is death, and eternal life is in the center of the labyrinth. Each “path” starts from the periphery and leads to the center, but each turn as if turns away from the center.

Interestingly, some of these labyrinths contain a deliberate error, which is called a “door” – it is believed that with the help of this door the spirit can escape from the labyrinth. 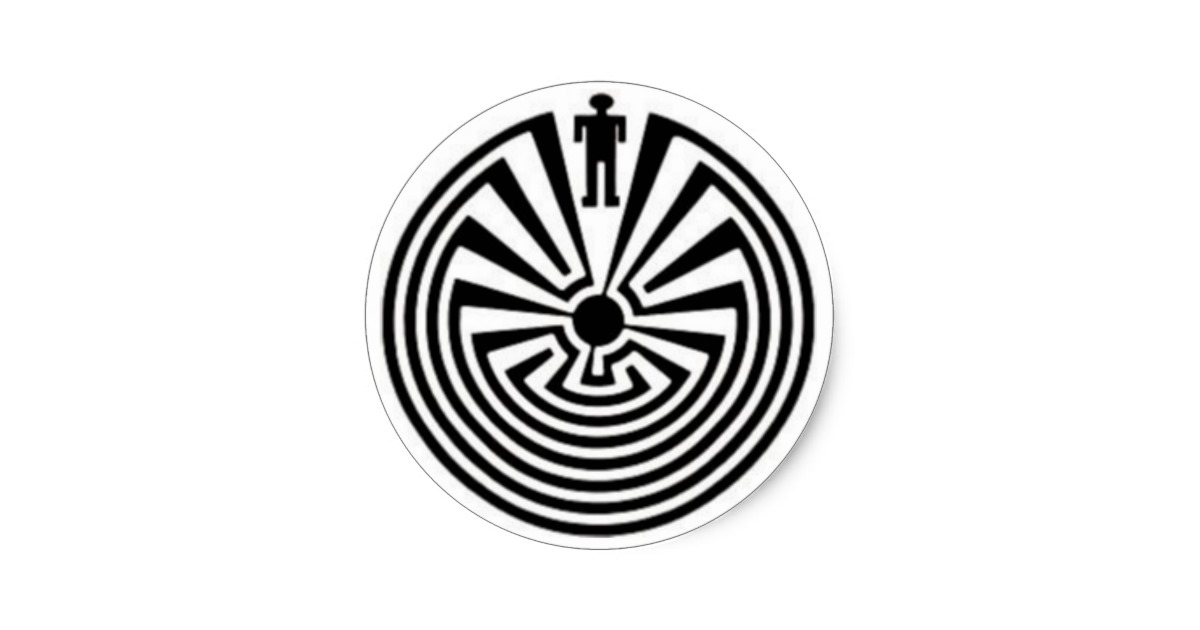 “Hollywood Stone”. In 1908, hunters of ermine in Wicklow County (Ireland) discovered a huge boulder, 1.2 m tall and 0.9 m wide, which depicted a labyrinth. A small section of the labyrinth, with a diameter of 70 cm, is absent on the stone.

It is assumed that the creation of the labyrinth belongs to the Middle Ages. Perhaps the “Hollywood Stone” was a signal to the parking lot for pilgrims who made the way to Glendalough: the stone was found just near the ancient pilgrim road leading to the monastery in Glend Low. According to some assumptions, the labyrinth could symbolize the tortuosity, unpredictability and difficulty of the pilgrim’s path. 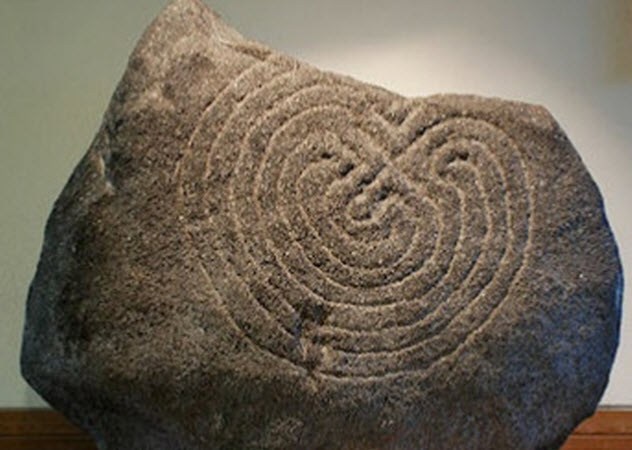 The earliest labyrinth “Jericho” was found in the monastery of Abruzzi (Italy) and dates back to 822 year. It is distinguished not only by age, but also by a square form – most analogous labyrinths appear as a circle. All interpretations of the values ​​of the labyrinth “Jericho” are associated with a rich biblical symbolism. 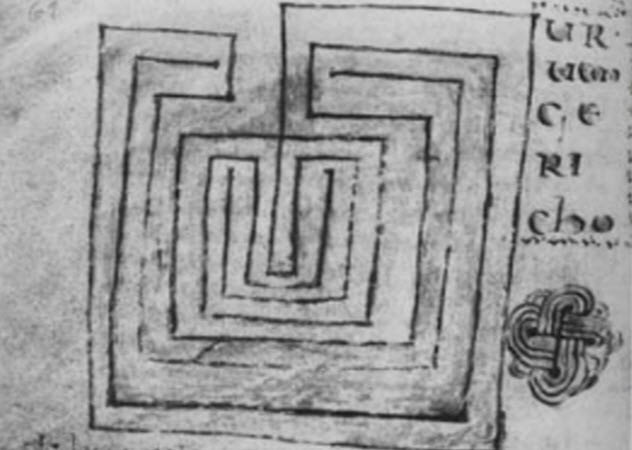 Blo-Jungfrun is a deserted island in the Kalmarsund Strait, in the Kalmar region of Sweden (Sweden). Throughout the centuries, the island has enjoyed the reputation of a mystical place where supernatural phenomena occur. Until now, tourists who visit the island are strictly recommended not to turn off the road and not to walk with the onset of darkness. The island is decorated with bare rocks, dense forests, caves and the famous stone labyrinth.

Labyrinths on the Scandinavian islands – a common phenomenon, but this is the largest in the territory of Sweden. Perhaps its creation is associated with the extraction of fish in the Bloch-Jungfrun (as, for example, and one of the versions about the appointment of labyrinths on the Solovetsky Islands). 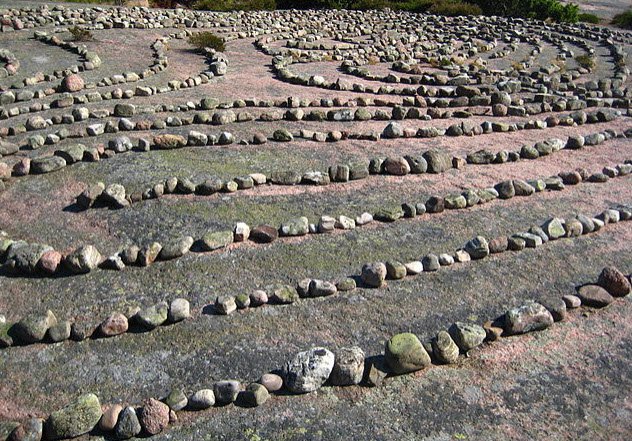 Riddle of Casa Grande. If the secrets of most labyrinths are related to the purpose of their creation, then the labyrinth in Casa Grande leaves a lot of questions about the time of its appearance. One of the strangest and most controversial labyrinths was discovered during the excavation of the ruins of the ancient city of Casa Grande in Arizona. On the northern wall of one of the buildings is a complex labyrinth. For many years he was considered the only labyrinth in North America and South America. Nevertheless, the construction of this labyrinth has a striking similarity to the Cretan labyrinth, which is more than 2 thousand years old. It is likely that the labyrinth in the Casa Grande was pre-Columbian. 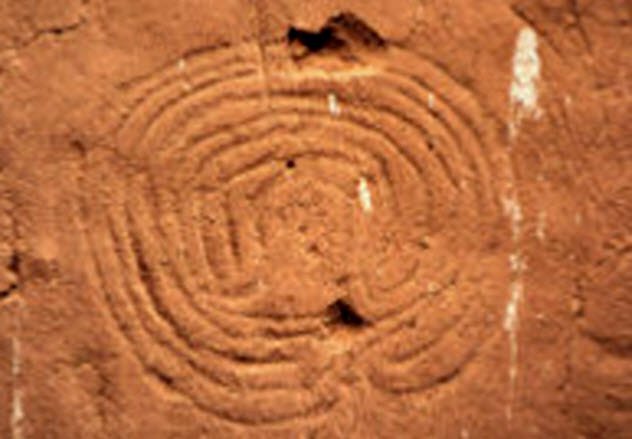 The Danish find. Most recently, in 2017, Danish archeologists discovered a series of stone clusters dating back to the Stone Age, which once represented a maze. The area of ​​the ancient labyrinth at Cape Stevns is 18 thousand square meters. To date, only a small area has been excavated, so it is difficult to judge of any particular purpose of the structure. Usually such palisades served for the defense of the territory. But in this case, the “poles” of the labyrinth are located far enough apart, at a distance of 2 meters, so that the enemy would be easy to penetrate there. Perhaps the labyrinth was used for ancient rituals. 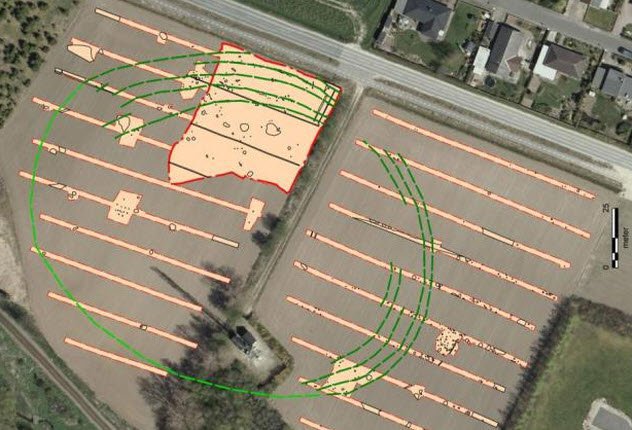 The labyrinth of the Minotaur is perhaps the most famous maze in the world. According to the myth, King Minos, ruling the island of Crete, ordered the architect Daedalus to build a labyrinth – a palace with intricate ways of corridors and rooms leading to the terrible Minotaur. Many believe that the maze, glorified in ancient Greek mythology, was Knossos Palace, a monument to Minos culture, which is already 4 thousand years old. However, this version is disputed by some scientists, believing that the palace was built much later than those described in the myths of events. There is an opinion that the real maze was a complex of caves in the mountains near Knossos – after all, they also represent a series of spacious “halls” connected by narrow “corridors”. 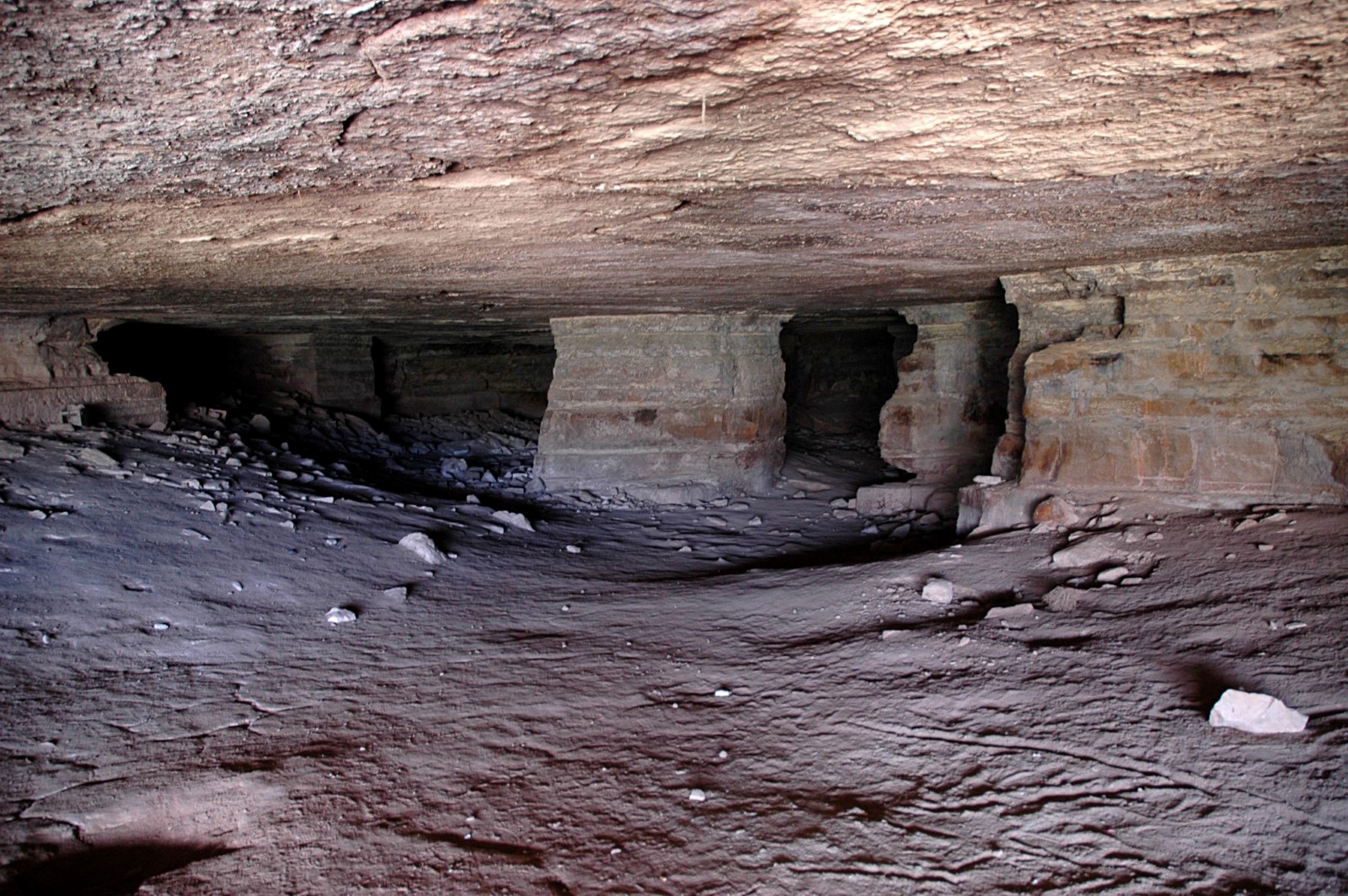