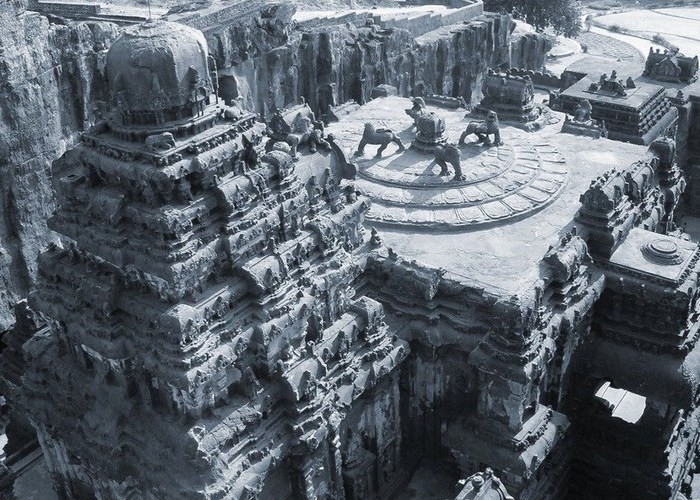 The Indian village of Ellora has become famous throughout the world for its multi-story cave complex of temples. The most grandiose and incredible of all the cave constructions of Ellora is, undoubtedly, Kailash (or Kailasanath) – the world’s largest monolithic structure carved into the rock.

In Ellora today you can find ancient Hindu sanctuaries (17 caves in the center), Buddhist (12 caves) and Jain (5 caves in the north). Hindu temples and sanctuaries are the oldest of them. Jainism arose from Hinduism and it is also older than Buddhism. The Jains were the first to adopt the Hindu architectural method of building temples in the form of a symbolic mountain. Who carved these cave temples – is unknown. Maybe they were not Jainas with Indians, and the main caves of Ellora were created in ancient times. It was recently discovered that originally the temple was completely covered with white plaster.

Nobody knows, but one can say for sure that the divinity attracted Jainas and Buddhists. That is why when their religions evolved from Hinduism, they began to attach great importance to religious symbols and figures. It is perfectly visible on the Kailash temple, which is completely covered with very complex carvings. What is especially interesting is that until now almost nothing is known about the origin and founders of the Kailash temple. Scientists did not find any dates and even the slightest trace of the design description.

Some experts claim that it was carved into a rock hundreds of years ago, while others maintain that the temple has already turned thousands of years old, it was simply made into it by Buddhist and Jainist monks. The inscriptions preserved on the walls are very old and practically destroyed due to time. Today, it is almost impossible to read and decipher them. According to local residents, the grandeur of the temple conveys the infinity of the universe and it was blessed by Hindu sages and gurus.

Kailash was so inviolable that even several attempts by the invaders of Padishah Aurangzeb to break down temple temples and desecrate the “divine structure” led only to further extermination of the Mughals. Only minor damage was done to elephant sculptures. The Kailash temple was in fact not built – the whole structure was carved from one giant piece of rock, and the rock massif was built from the top downwards without the use of scaffolding during the construction of the temple.

The temple measuring 55×36 meters (total area of ​​1980 m?) Is located in the center of a yard cut in a rock in the size of 58 x 51 meters and leaving into the depths of the rock by 33 meters. The lower part of the temple is a pedestal 8 meters high, on which there are 3-meter sculptures of elephants and lions. Also, the temple of Kailash is remarkable because it is literally covered with a very complex stone carving. What is remarkable, the size of this rock temple is twice as large (and one and a half times higher) of the famous Parthenon in Athens. 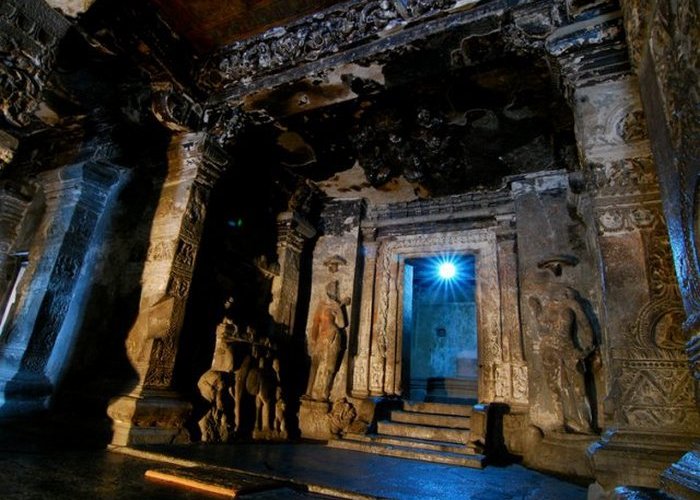 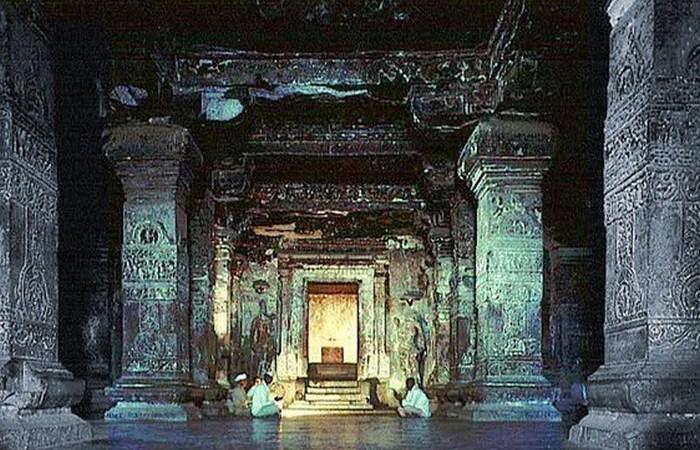 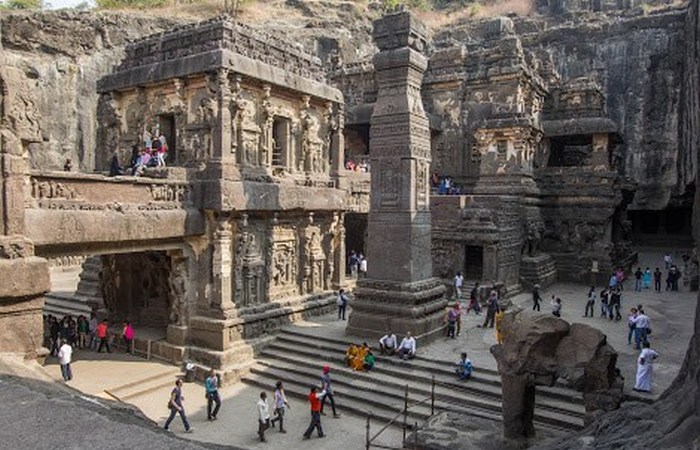 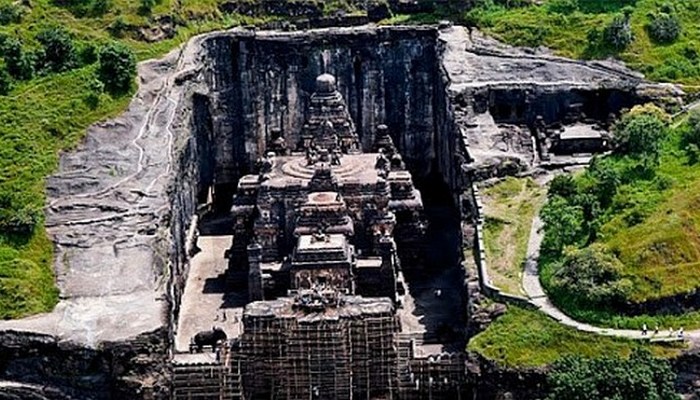 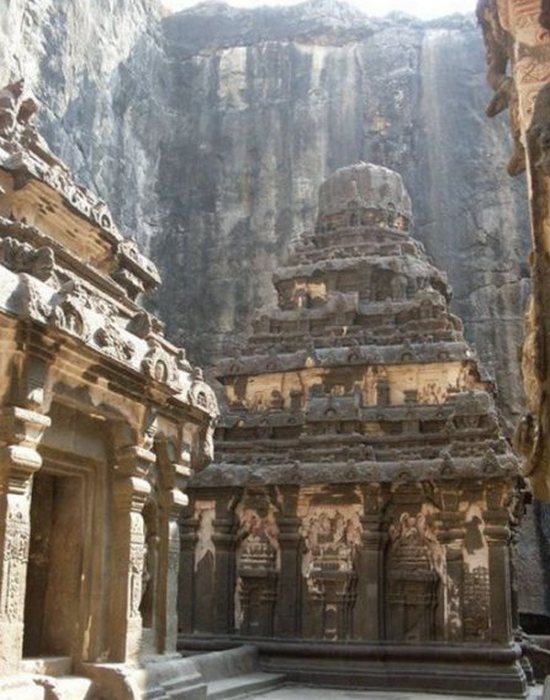 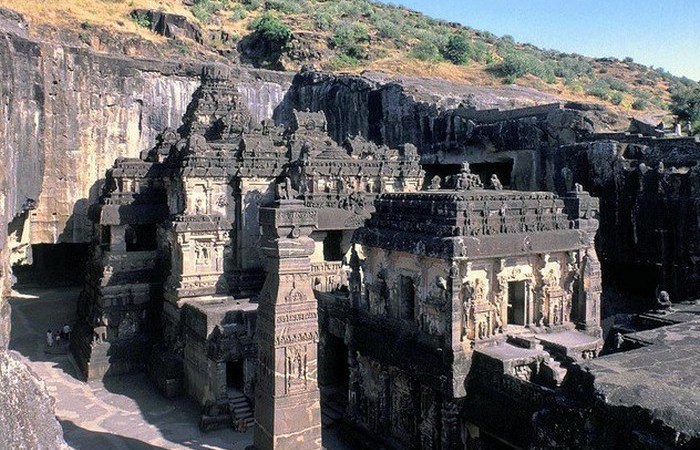 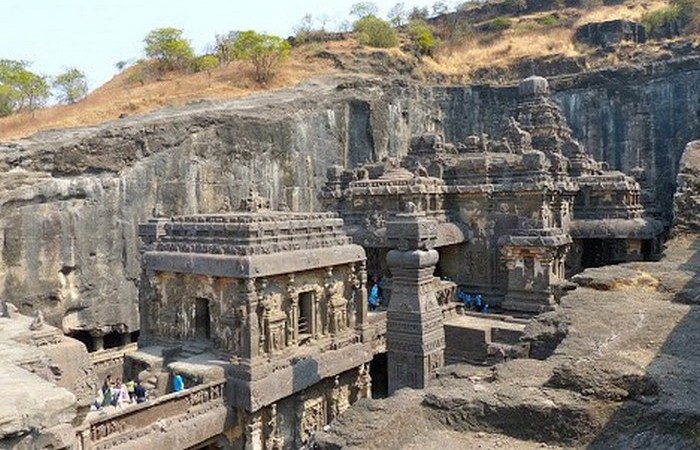 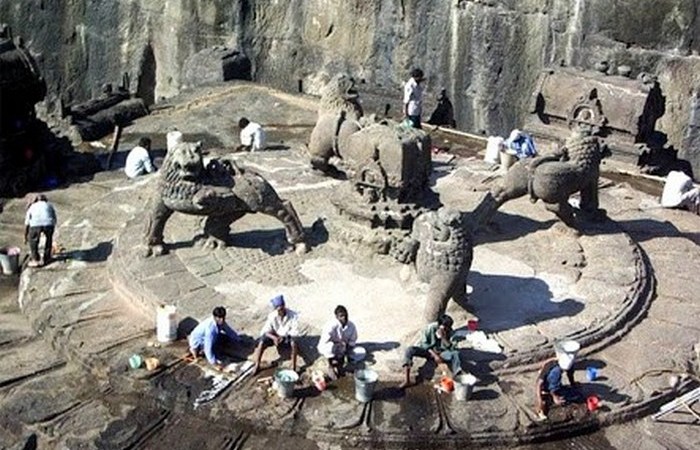 It was estimated that 200,000 tons of rock had to be extracted for its construction. Scientists suggest that it took 7,000 workers and 150 years to complete the project. It is worth noting that all 34 caves of Ellora are not of natural origin, they were all carved by Indians manually from a monolithic rock. Although, as already mentioned above, no one knows exactly when the cave complex was created, it is usually assumed that it was created between the fifth and tenth centuries of our era. True, it is still unclear how this was done, because at that time there were no technologies that allowed it.

Hypothetically, if a similar temple was built today, then it would take at least 10 of the largest mining 10-ton JCB machines. Moreover, if in ideal conditions they excavated 1,000 tons of rock each, then one process of extraction of rock would take about 200 days of continuous operation. The accuracy with which it would be possible to perform such processing of stone is unattainable even with modern technologies. Thus, it would take manual labor to cut out the temple literally in centimeters, so the time to create such a temple from scratch is even difficult to imagine.

Additional mystery to the Kailash temple is given by mysterious narrow holes, which are everywhere found in the temple at a level of 1 meter from the floor, or even lower. If people did this, then 3 questions are unclear: what are these holes for, why they were made so low and how they made it (they are very narrow and their edges are strikingly smooth). The repetition of such a feat, even with the use of modern technologies, is almost impossible, but the ancient Hindu sages managed to make a real miracle thanks to their spiritual strength, perseverance and devotion to their faith.