Mysterious “Bridge of Adam” between India and Sri Lanka 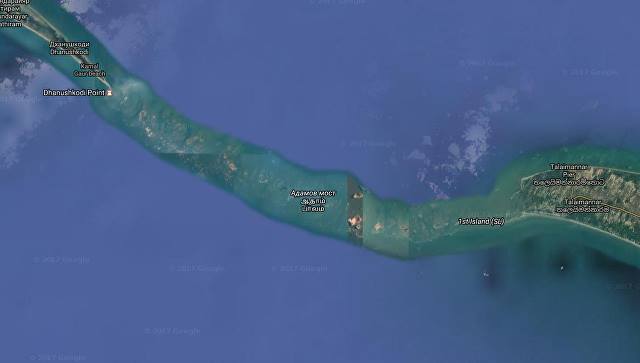 Indian archaeologists intend to study in detail the string of shallows between Sri Lanka and India, which the Muslims call the “Adam Bridge”, and the Hindus – “Rama Bridge”, and answer the question of its origin.

According to the epic “Ramayana”, the ruler of Rama ordered to build a bridge in order to go to Sri Lanka to battle with the demon Ravana, who abducted Sita, beloved king. Hindus consider the object sacred. Isthmus also appears in Islamic legends – it is for him that expelled from paradise, Adam moved from the island to the mainland and went to a meeting with Eve.

“There is no archaeological evidence that the Rama Bridge is man-made, there is only a religious aspect,” said the former head of the Indian Council for Historical Research, Deyantes Tripati.

In turn, underwater archaeologist Alok Tripati believes that “Rama Bridge” is still a man-made object. The isthmus, in his opinion, could be built by representatives of an ancient civilization, which about four thousand years ago, under the pressure of the Aryan tribes, was forced to flee from the Hindustan peninsula to Sri Lanka.

“But without fieldwork, you can not say anything,” the researcher points out.
Alok Tripathi will head an underwater expedition of archaeologists, which the Indian Council for Historical Research will send this summer to understand the origin of the isthmus. Previously, the work was postponed several times. So, in 2005 the project was canceled because of mass protests by believers, and in 2013 due to the tsunami threat.

Now the Indian authorities want to deepen the “Rama Bridge” to facilitate navigation. But the Hindus protest against this, which constitute the majority of the country’s population.