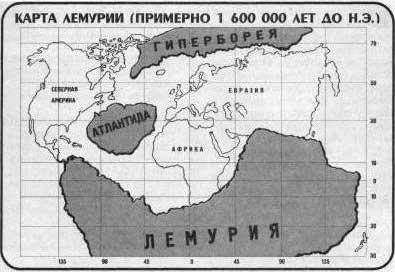 Lemuria is a mythical sunken continent. Its name is associated with the name of the Madagascar primates of lemurs, which are not found anywhere else.

This is how supporters of the Lemurian hypothesis concluded that the island of Madagascar is a preserved part of the once existing continent. By the way, also in favor of this theory is the fact that the indigenous population of Madagascar is anthropologically closer to the inhabitants of Indonesia than to African Negroids.

The hypothesis of the existence of Lemuria was first put forward in 1864 by the zoologist Philip Sclater. This idea was also picked up by the French scientist and traveler Louis Jacolliot, who at about the same time lived for a long time in Oceania and studied the peoples of Polynesia. According to his findings, the Hawaiian Islands, New Zealand and Easter Island are the three surviving peaks of one continent. Its remnants are also the numerous islands in Oceania, which used to be mountains.

Since even according to current standards the Pacific islands are far from each other, and to swim from one to another in ancient times it would be simply impossible, and accordingly, the native inhabitants of these islands could not communicate with each other, nevertheless the scientist faced an amazing fact: each a tribe of natives on different islands told European pioneers the same legend about how their island was once part of a huge land. They also spoke a very similar language, had the same customs, customs and religious beliefs.

Supporters of the theory believe that the territory of Lemuria stretched from Madagascar in the Indian Ocean to Easter Island in the Pacific Ocean and included Australia, India and in general all of South and South-East Asia.

Really, I want to believe in this myth, but I will again attach my favorite GIFK about continental drift, according to which it is clear that Madagascar was indeed once connected to India, which in turn “swam” ? and merged with Southeast Asia, and The Australian continent once scattered over many large and small islands in the Pacific Ocean, and the “amazing” facts described above are also fully justified.