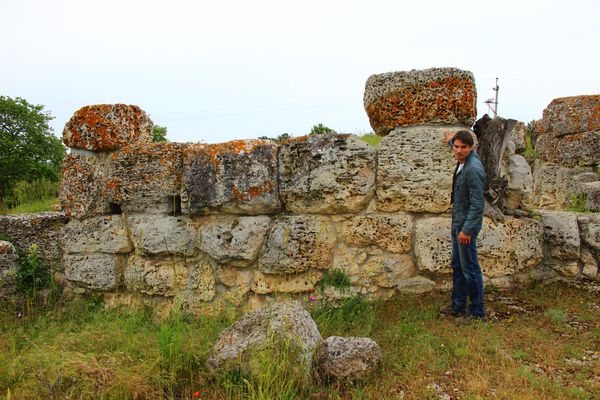 Massive multi-ton blocks lying at the Foundation of ancient buildings of the so-called wine-making complex in Balka bermana, differ from traditional limestone blocks that were used by the ancient Greeks for building their cities in the Crimea. Given the fact that in the territory of the protected area known remains of settlements of the Neolithic period, and near the complex was found several stone mounds with objects of Kemi-ubinskoe culture, there is the assumption that the Greeks had built their fortifications on the site of existing ruins of some ancient cyclopean buildings…

“The complexes are architectural remnants of buildings, wineries, powerful defensive walls, underground cave structures from Hellenistic, Roman and Byzantine periods. According to the results of the excavations can be argued that life has not stopped since IV century BC-XIV century ad” — structures in the beam Berman described on the official website of the reserve Chersonese.

The structure of this multifunctional complex, according to the findings of archaeologists, was part of a defensive tower of the IV century BC, several utility rooms and courtyards with wells and cisterns for water storage, wineries with well-preserved wine presses and presses the stone, recesses in the rock for buildings, and also basements for storage of wine. Archaeological materials found during the excavation of this fortified complex, belong to the IV century BC — XIV century ad the earlier items, archaeologists have not yet found.

Studies have shown that this site was used in Hellenistic times, was built in the Roman period and the middle ages remains of early walls were used as the basis for later building.

This, of course, possible to explain the variety used in the construction of buildings of stone materials: why drag here the building material, if there is a ready base? Even now, in our time, many people prefer to build houses on the site of the old, established foundations. But if to speak about the beginning of construction, then, in our view, its origins lie in the more distant from us in time than Hellenism. 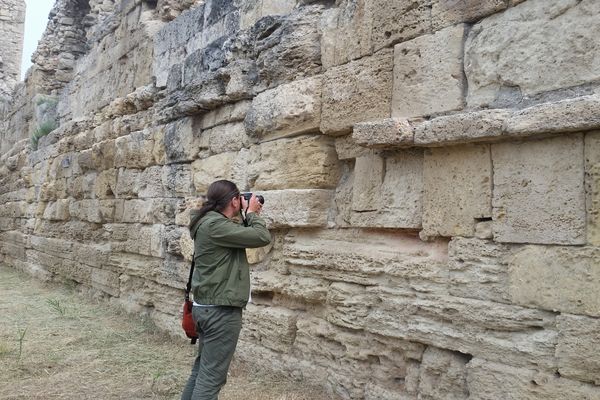 A fragment of the defensive wall of Chersonese

In order to compare the complex structures in the beam Berman with the classic architecture of Hellenistic and Roman times, enough to ride on the Crimean coast to see the remains of these ancient settlements, as the Kalos-Limen, Belyaus, Chersonesos and Panticapaeum, on the Kerch Peninsula, belonging to the same era and made as a blueprint — in accordance with the then existing architectural standards.

But reinforcement in the beam Berman, the foundations of buildings, consisting of thick limestone blocks, clearly out of the General picture in form and machining method, look in this row complete strangers.

But most importantly, not confusing, is the size of the building blocks. We specifically measured the parameters of building materials in the defensive walls of the ancient Greek Polis of Tauric Chersonesos, and were extremely surprised with the results. The largest blocks, lying in the lower levels of the defensive wall that are related to the original ancient walls comprise a length of about 1 meter 60 centimeters, the height is about 80 inches, and a thickness of about 30 centimeters. Meanwhile, the “cubes” of the estate in Balka bermana have sizes: 2 meters 20 centimeters in length, in height — 1 meter and 30 centimeters in thickness and 1 meter 20 centimeters. That is about three times more. If even safely assume that the complex in the South-Eastern edge of the Heraklean Peninsula and had some strategic military value, it can hardly be put on a par with such a policy, as the Chersonese. Especially with the tall defensive wall, which wouldn’t have bothered to save. After all, the heavier the blocks, the more reliable…
Kemi-abency or Tauri?

Interestingly, the reserve staff confirmed that the beam was discovered traces of the presence of representatives of the most ancient cultures known to us. For example, elevated position, three hundred meters from the farmstead, is excavated in the 80-ies of the last century stone mound. Moreover it is known that he is not single.

Alex Arzhanov, an employee of the State historical and archaeological Museum-reserve “Chersonese”:

“The mound in the gully Berman refers to several cultures: Kemi-ubinskoe, Kizil-Koba and carcass. In it were found a moulded pot, fragments of other ceramics, 27 skeletons, Dating from the III Millennium BC to the III century BC. That is, for nearly three thousand years it was buried and pozakryvali”.

And the story of the Crimean local lore, in the territory of the protected area known remains of settlements from the Neolithic and bronze age. These monuments preceded the construction of the Chersonesites.

It is curious that technology intersects with technology, building cave cities. Was done spaces in solid rock, and the top prestavlenie huge, multi-ton blocks. The blocks represent roughly worked limestone blocks, like the plates of the Crimean dolmens. So it is possible that those same Greeks built their manor house on the site of Taurus settlements. By the way, the theory about rough stone processing brands, in our view, not warranted, because of centuries of erosion is blinded even perfectly processed limestone blocks…