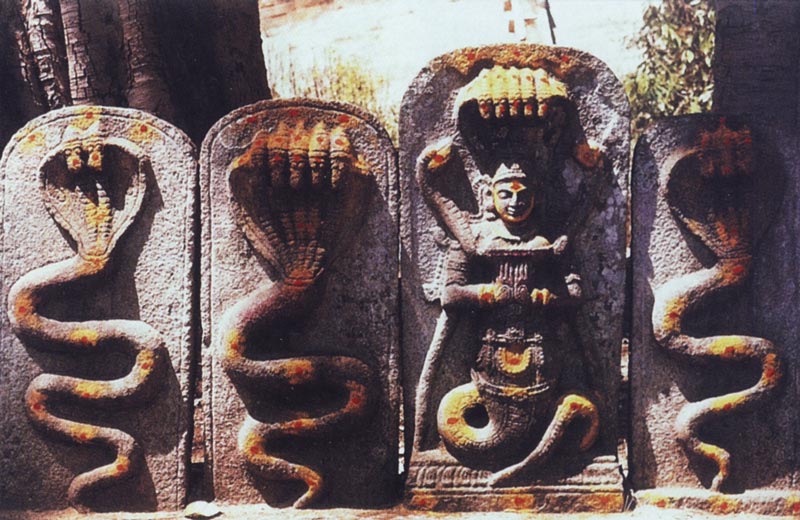 Naga (Sanskrit) Serpent. Demigod. Snake-like creatures living on earth, in water or underground. The mythology of the “snake man” has ancient roots. Nagov is depicted with a man’s head. Nag is the symbol of wisdom. There is a cult of the snake and related holidays.

It is believed that the naga was the totem of one of the mighty ancient tribes, whose representatives were called naga. The sage Patanjali is depicted in the form of a naga, the upper half of which has a human face. It is believed that the Buddha preached naga. Nagarjuna for seventeen years meditated on the image of the Naga, then plunged into their element, water, where he acquired the highest intuitive wisdom (prajnaparamita). Water is a symbol of the unconscious. It involves experiences with the deepest immersion in the meditation process. It is argued that the naga kept the truth in secret until people were ripe for her understanding. The Nagas are inhabited by a great abyss (Mahatala), one of the most terrible of hells. In the form of a snake, they represent kundalini, the energy that rises in a person in spiritual practice from the lowest psychophysiological center (chakra) to the higher, where a merger with God occurs. Nag protected his hood with the Buddha from the scorching sun during his meditation before enlightenment.

The Nagas were considered the children of Kadru, the wife of Kashyapa, and were constantly at odds with the birds and their king Garuda, born by another wife of Kasyapa-Vinata. The nagam belongs to the underground world – patala, where is their capital Bhogavati and where they guard the untold treasures of the earth.

Nagas are considered wise men and magicians, able to revive the dead and change their appearance. In the human form, the naga often live among people, and their women – nagini, famous for their beauty, often become wives of mortal kings and heroes. Thus, the hero of the Mahabharata, Ashvatthaman, the son of Drona, married the naghini girl; the princess-nagini Ulupi was the wife of Arjuna, and nagini Kumudvati – the wife of Kusha, the son of Rama.

In myths, many kings of the Nagas are named, among whom the thousand-headed serpent Shesha, who supports the earth, is most famous; Vasuki, used by the gods and asuras as a rope while churning the world’s oceans; Takshaka.

The extensive cycle of myths about the Nagas is found in the first book of the Mahabharata, which refers to the great sacrifice of serpents undertaken by King Janamejaya in retaliation for the murder of his father Parikshit by the king of the Nagas, Taksaka. Sacrifice was stopped by the sage Astika (Vasuki’s nephew), who took advantage of the right to express any desire (this right was granted to him by Janamejaya for the fact that Astika blessed him). One of the legends of this cycle tells how the naga got immortality by tasting amrites, but their tongues split, for they had to lick amrit from the sharp stalks of the kusa grass.
In Indian sources, the representation of the divine serpents – is mixed with the idea of ​​the Nagas – historical tribes living in the north-west of India even before the arrival of the Aryans. “Nagadwipa” (“the country of the Nagas”) was regarded as one of the nine regions of Bharatavarshi, ie, India; A lot of Indian toponyms are connected with the root of the “Naga”. It is assumed that the real naga were tribes of the Mongoloid race, which had their totem as a snake (cobra), and that the mythological interpretation was thus superimposed on a historical basis.

Descriptions of the naga are found in many canonical texts, for example, in the Jatakah. Nagas are divided into two classes – living in water (in rivers and seas) and on land. Nagas can be transformed into human beings. Often they enter into an amorous relationship, both with women and with men, the descendants of these connections are extremely gentle, since they have a “water essence”.

Nagas are often angry; it is believed that their breathing is poisonous, and the sight can bring death. Buddhism is favored by Buddhism and is often favored by its ardent devotees. Shakyamuni himself, even before becoming a buddha, several times reborn as a naga. In the mythology of the Mahayana myths are spread that tell how the famous philosopher Nagarjuna extracted from the naga the sutra Prajnaparamita, which they guarded until people were ripe to understand it. Outside India, the naga were compared with local snake-like deities.

In mon-Khmer mythology the naga live underground and in water sources; can turn into beautiful women.

According to one of the myths, the founder of the Khmer state, Dust Thon, was able to penetrate into their world, sitting on a tree that fell every night under the earth. There he married the daughter of their king, who gave him a sampo (waistcoat) with a picture of a naga. In the old days, the groom was supposed to give the bride such a sambot. Before, during the wedding ceremony, the groom and the bride were severed a little front teeth, so that they could not turn into naga.

The woman-nagini is the central image of the Khmer dynasty myths. According to one of them, the Khmer king had to spend the nights with the many-headed naginas, and the welfare of the country depended on this. In one Buddhist myth, Muchilind belongs to the merit of saving the Buddha during the flood, in the other – naked, by deceitful became a disciple of the Buddha and was exposed.

The Laotians especially express the function of the naga as spirits – defenders of the country. Thus, it is believed that the capital of Laos Luang Prabang is guarded by twelve naga led by Thao Bunsong and Thao Tongkhuang. On the instructions of the naga was built the city of Vientiane, the former capital of one of the principalities.
Nagas in the rainy season live in ponds and rice fields flooded with water, and in the dry – they swim in rivers and then there are wicked. With the onset of the rainy season, ceremonies were organized to facilitate the transition from rivers to inland waterways to ensure fertility of the fields. The Nagas also inhabit the rocks. According to the medieval Laotian manuscripts, there are fifteen kings of naga (priya nak). They live at the confluence of rivers, on rapids. These spirits of water can turn into people. According to these data, the most powerful naga is Pha Sya, guarding the north of the country, and Paksoprop.

Where do the naga live?

Nagi is almost always associated with the aquatic world. In epics there are certain habitats, for example, the underground lake Potala, sometimes called the underground kingdom of Nagalok or Patalalok, with many underground palaces, or simply the “lower realm” of the same name. A number of sources indicate that the kingdom of the naga is located immediately under the base of the divine mountain Meru, and beneath the serpent’s abode there are the hell’s receptacles.

What is their nature?

They are regarded as potentially dangerous, possessing a powerful force, in many respects superior in their development to people. It is believed that most of them are demonic entities, and some even got immortality, as a result of licking the elixir of “eternal life” meant for the deities. However, despite the fact that most of the naga are associated with people with evil, some of them have become worthy of respect and worship, since it is associated with the activities of certain gods.
Who are they, outstanding naga?

The most famous of them had their own names. The seven-headed Ananta, also known as Shesha, supported Lord Vishnu on a bed of serpentine rings floating along the vast cosmic ocean, while God dreamed of the existence of the universe. Another naga, given its own name, is Vasuka. According to legend, his body was wrapped around the sacred mountain Meru so that the gods and demons could shake it, dragging the snake by the tail and head. All these manipulations were to lead to the beating of the original ocean on which it was located, and to obtain a drink of immortality, ambrosia. In addition, Vasuka was the necklace of Lord Shiva and an assistant in the fight against evil demons. Nag Muchulind, defended the meditating Buddha, from the bad weather, for which he wrapped around him seven times and covered his family with his own heads – hoods, like an umbrella.

This relationship of the naga with the Buddha is not exhausted, but finds continuations in numerous legends, some of which we want to offer for reading.

What are the rituals of naga worship?

Especially expressive is the tradition, preached by the Lao and Thai people living on the banks of the Mekong River (northeast of Thailand). They believe that the magical serpent inhabits its waters. And so they bring a naked victim every year. Its material embodiment depends on what each village specializes in. Local residents believe that if you offer an offer before a trip on the river, then he will certainly protect from all the troubles associated with water.

In addition, every year on the night of the 15th day of the eleventh month, according to the lunar calendar, usually this is the first decade of October, an extraordinary event takes place, and tens of hundreds of people gather to observe it.

Namely, in certain areas of the Mekong at night over the water appear fireballs, the origin of which locals associate with the vital activity of the magic naga. Workers of the editorial board of “Infoservice” several years ago witnessed this phenomenon. There is no single scientific point of view regarding its cause at present. In some years, there were theories about possible accumulation of luminous plankton, emissions of inert gases, ball lightning, etc. Nevertheless, the mystery of the “Nagoya Mekong” remains undefined to this day.

In Hinduism there is also a special feast of naga worship, called the Panchamy Naga, which is celebrated on the fifth day after the full moon. On this day, adherents of this tradition are gluing images of naga on the doorway. As part of the ritual, to please the deity, his image is offered milk, a favorite drink.
And what are these images and where can they be found in Thailand?

How and where do they depict the naga?

Sculptural images of the naga went to Thailand as a legacy of the Khmer Empire, the boundaries of which during its heyday (12th century) extended to most of it. They are an integral part of the Buddhist temple complex. Most often sacred having a long scaly body and several heads (but certainly an odd one) the naga surround the main temple building or decorate the balustrades of the stairs to them leading. Due to the peculiarities of their residence and magical abilities, as mentioned above, they can be considered a kind of bridge between the world of people and gods.

I realize this is probably written by someone for whom English is a second language, but please have it edited by an English speaker because it is very difficult to read in places (e.g., “Buddhism is favored by Buddhism and is often favored by its ardent devotees.”…)