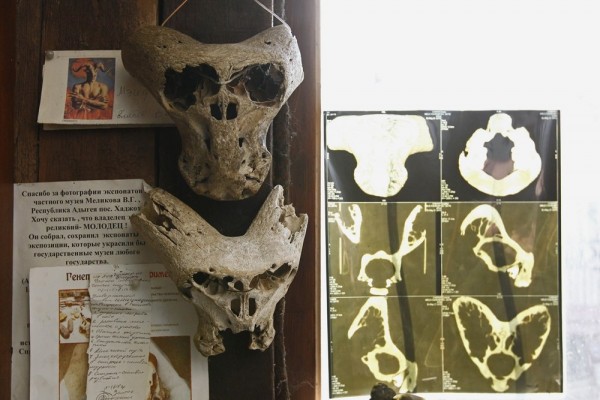 Not so long ago members of the Russian geographical society(RGS) of Armavir and the group “Kosmopoisk”, went on an expedition to one of the republics of the North Caucasus Adygea and visited a unique paleontological and ethnographic Museum in the village of Kamennomostskiy,which is located thirty kilometers from town on the road to Krasnoyarsk and the plateau Lago-Naki.

“In the mountains of Adygea found two skulls of an unknown science creature and a chest with the emblem of the Ahnenerbe – the most secret in Hitler’s SS companies involved in the occult and otherworldly forces”.Such we received information from two people with whom we talked to before going to these places.Accordingly, we are unable to ignore these things and went to deal with it on the spot.

In the Museum we were greeted very well and kindly.The owner of the freak show Vladimir G. Malikov,was very friendly and sociable person,who told us the story of how he got such a strange exhibits.

– Roomy trunk brown leather handle and the emblem of the secret society the Ahnenerbe on the cover I brought one elderly local resident, says the owner Hazarskogo Museum Vladimir Melikov. – He is a true hermit lives in the woods in the dugout, but where exactly, nobody knows. This is my old friend, often brings to the Museum of rare things, such as German binoculars, German first aid kit with medicines of those years. Once offered and fascist boots, said pairs of 20 he still has… Then I thought: not the hiding place in the forest found a man? All findings were in good condition. Matches, for example, even now the kindle fire. Maybe even a whole cache? To find such a place, what a rare stroke of luck.

…Looking at the lid of the trunk where you can clearly see the official emblem of the Ahnenerbe. Headset stylized runes. The inscription Besondere Bekl[eiderung] is about the Special attachment. So what should have been them in these places?

Artifacts, of course, interested us. After all, if many of the details of the operation of the Wehrmacht, code-named Edelweiss, which is the highest mountain of Europe Elbrus in Kabardino-Balkaria was established banners with Nazi symbols, known to historians, what did this secret organization of Germany in the mountains of Adygea?
According to the researchers, the SS is likely interested in the mysteries of ancient dolmens and enhanced natural radioactive anomaly in the area Kishinskogo canyon. They could also hunt for the gold of the Kuban Rada, lost in these parts during the Civil war.

Among other findings – full color German map of the territory of Adygea, made in 1941. We were surprised by the high accuracy and the completeness of the plotted objects.Very impressed by the exhibit with the caption “the Prometheus Circuit”.A huge stone giant sharpened chain with several links.So we have seen for the first time in my life.Who and what she needed to do is not clear.She was found in the mountainous Dagestan.Also it was nice to see at the Museum cast from the track of Bigfoot(Yeti).Three of the cast are in this Museum various sizes and size.As well as a diverse array of Ammonites,shells,shells and representatives of the ancient flora and fauna. 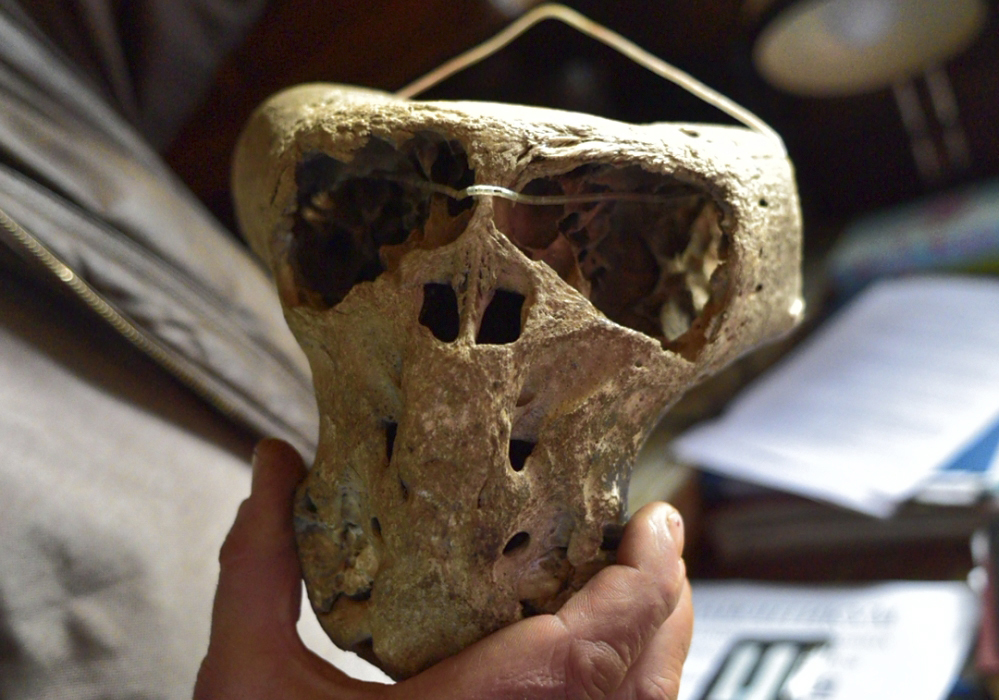 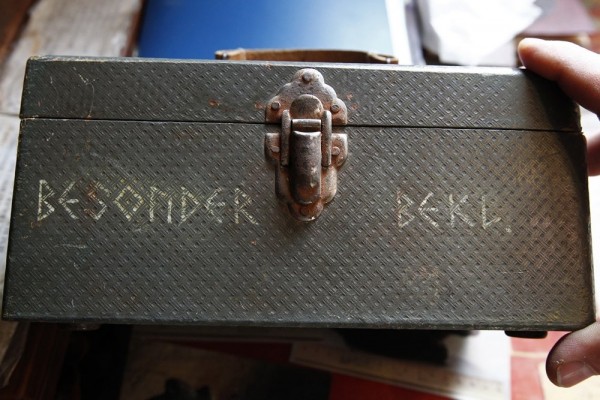 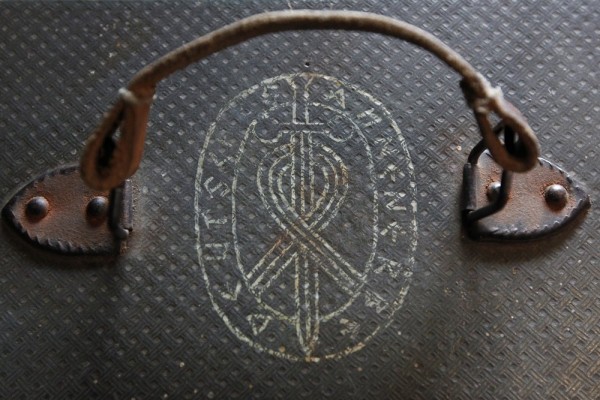 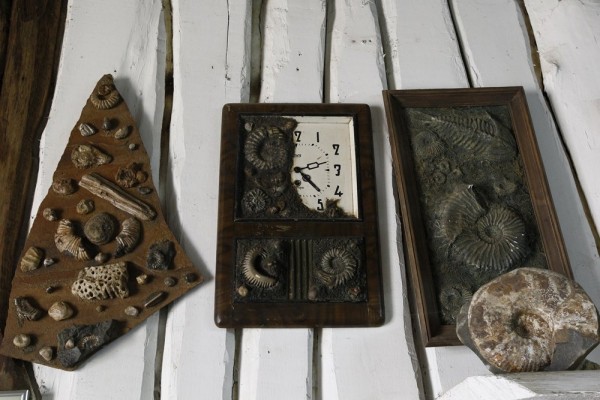 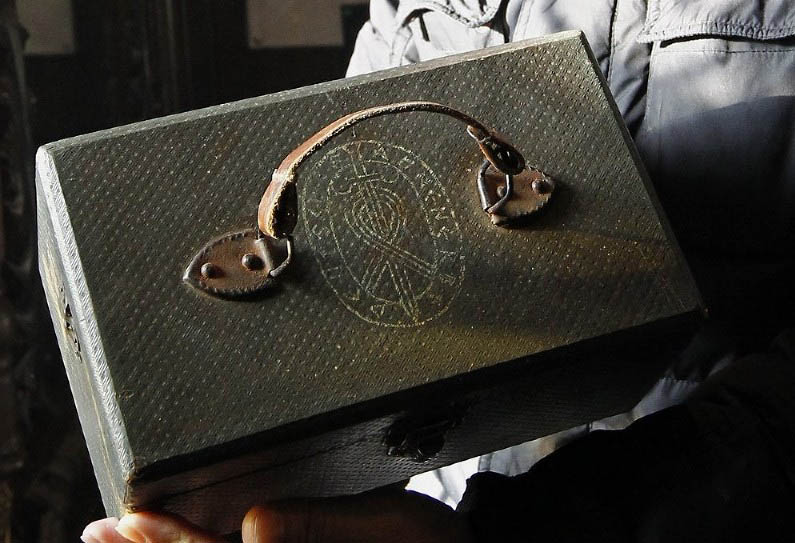 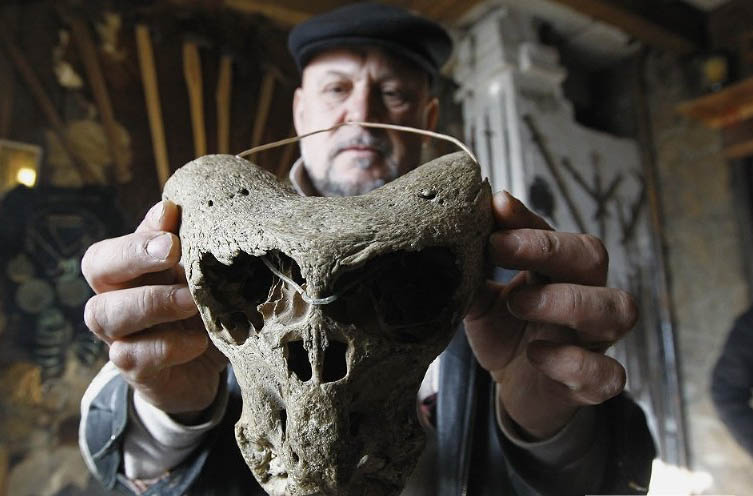 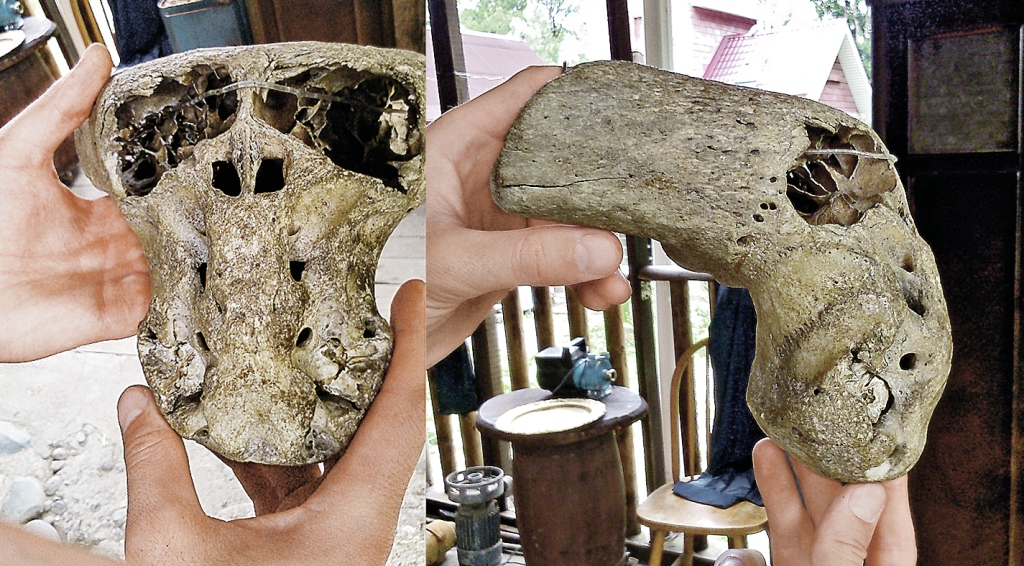 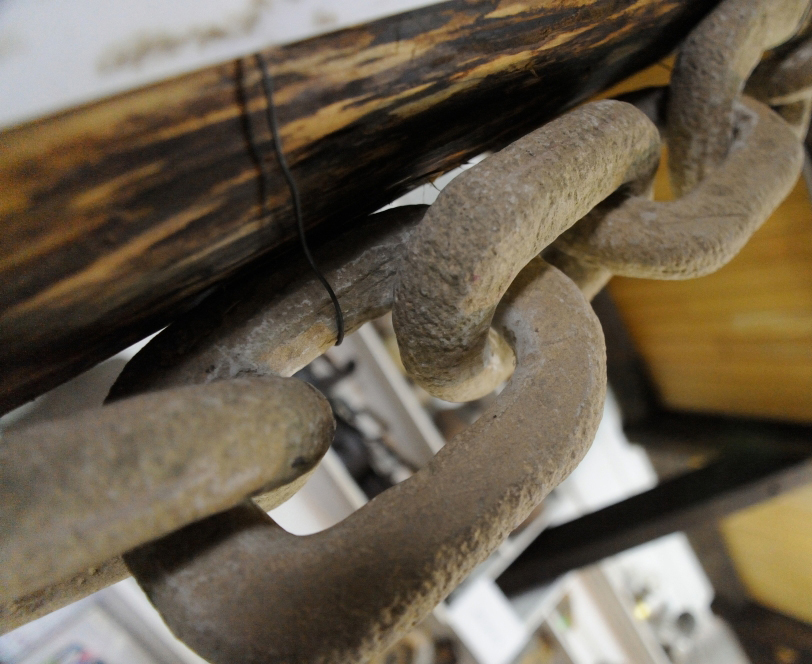 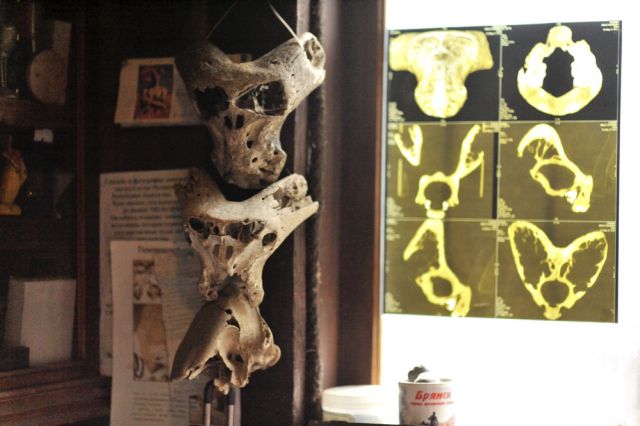 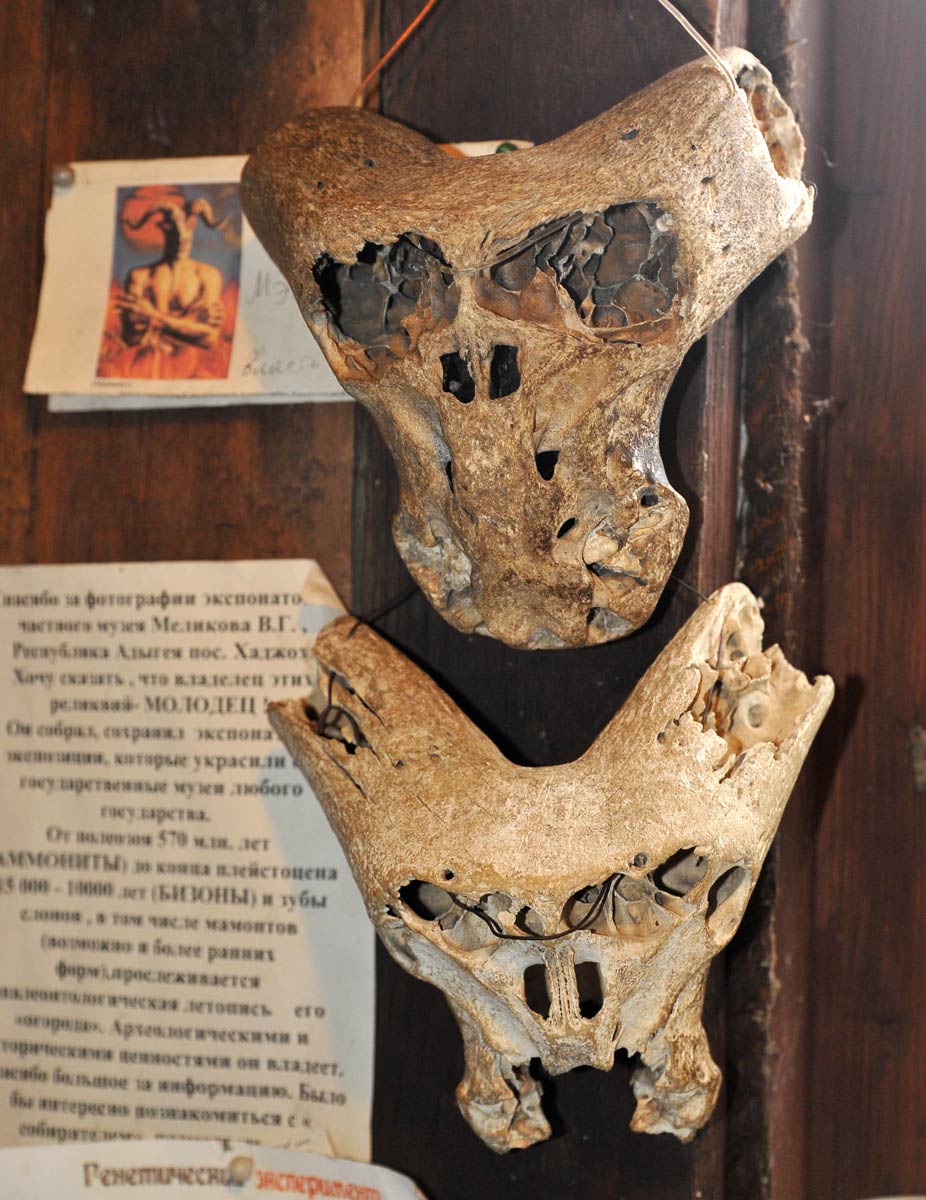 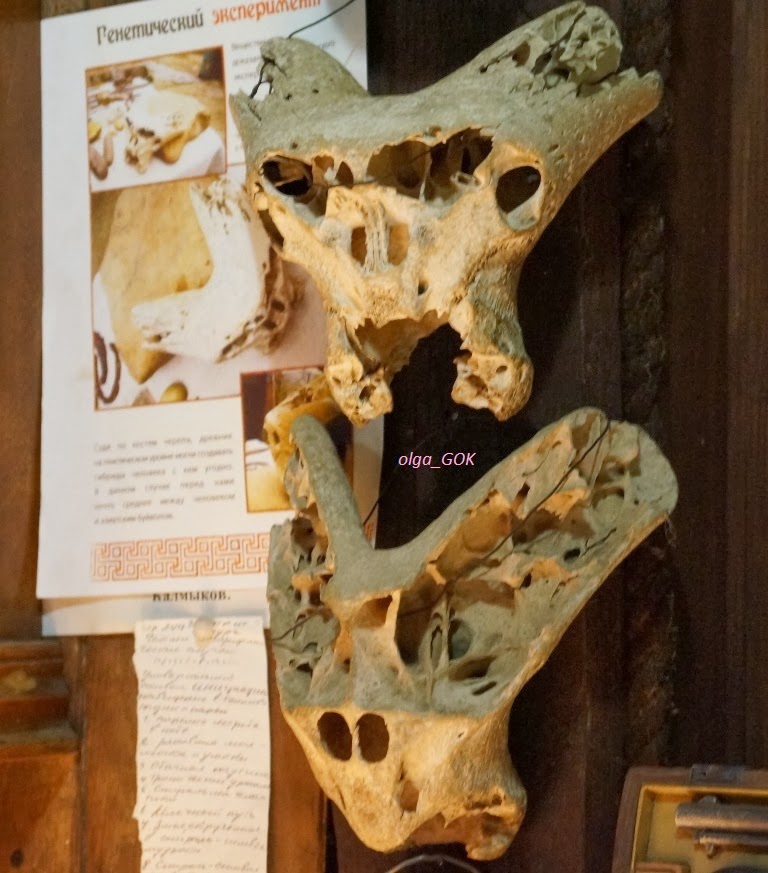 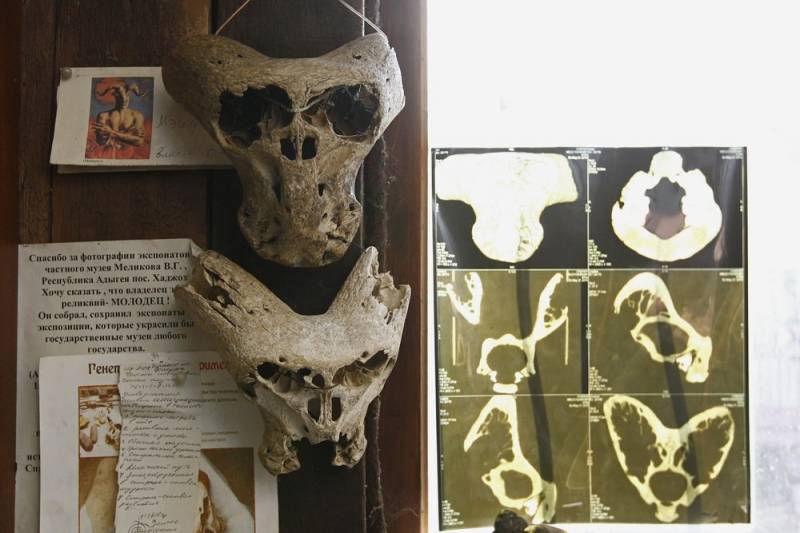 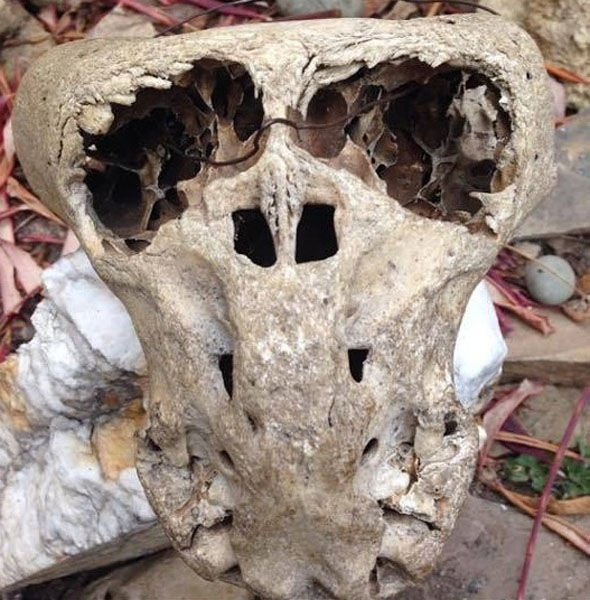 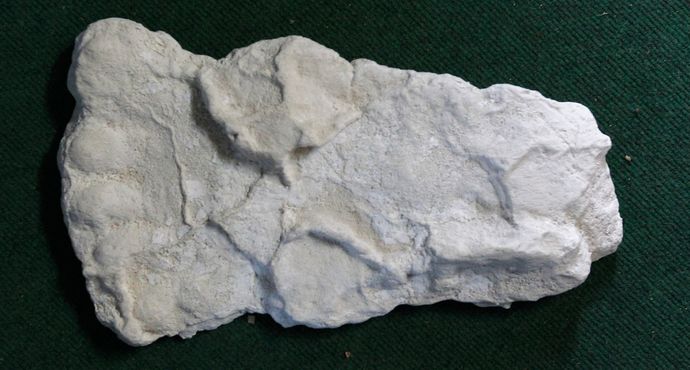 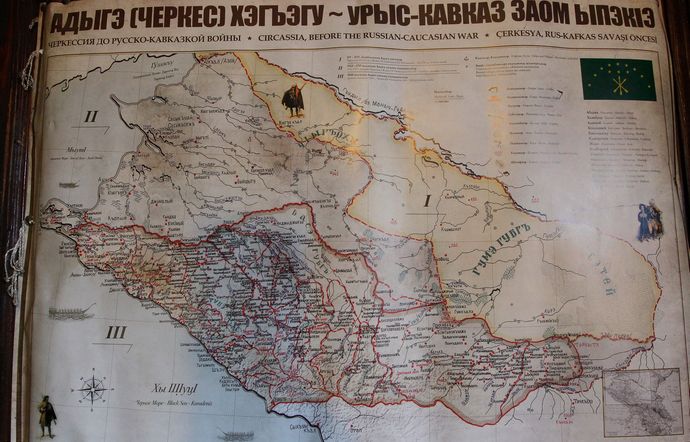 Two years ago Vladimir Malikov cavers brought two unusual skulls with horns, which they claimed was found in one of the caves on the Big Dace. They resembled the remains of animals, maybe even very ancient fossils. But when he began to carefully explore the findings (after all, previously worked as a dentist), it literally chills ran through the skin.

Indeed, the artifacts look unusual. Even when compared with the skull of a bear, which lies close by. There is a great temptation to assume that holding the remains of some alien. Photographs of finds were sent to the capital paleontologists, but those only made a helpless gesture. Just admitted that nothing like that before never met, and delicately hinted: maybe the skull of a sheep were a long time in the water flow with sand and strongly deformed? Miracles, and only. Assuming the deformation was synchronous – because the strangeness again at two turtles.

Our research team believes that these findings, too, could fall into the hands of Hitler’s “magicians” who were hunting for unusual artifacts.

The are,a member of the Omsk branch of the Russian geographical society(RGS)Alexey Bondarev looked photos, said:

“The photographs from the Museum depicts only two poor preservation of the skull of the Caucasian mountain goats (tours). Alternatives and extensive search there may be chamois and bezoar goat, but the shape of their horns and the frontal bone is still different from the observed in the picture. It came two rounds: Western Tur Capra caucasica and Capra cylindricornis are vostochnobeisky (the second part of researchers as a subspecies of the first). You can bargain about the sheep, but a General definition photographs of bone fragments – a thankless task. Given the geographic location of Adygea, it can be expected that the skulls belong to the Alpine rock species (subspecies), but now it does not really matter”.

By the way, ufologists, looking at the finds, immediately identified that it’s the Anunnaki of Ancient Sumer, the horned God, whose name is interpreted as “came from heaven”. In the Sumerian epic, they participated in the creation of the world.

American writer of Azerbaijani origin Zechariah Sitchin identifies with the inhabitants the Anunnaki of Nibiru – a hypothetical planet of the Solar system with an elongated orbit. According to astronomical calculations, it appears in sight once in 3.6 thousand years. As Sitchin writes, during this period, the inhabitants of Nibiru down to Earth and come into contact with the natives, that is, with us.

– We can build all sorts of versions and guesses, but the artifacts found in the mountains of Adygea-provoking, said goodbye to us the curator of the Museum of V. G. Malikov.

In the summer of 2015 in Elbrus hunters for treasures found another suitcase Ahnenerbe with the skull of a strange origin, allegedly belonging to the gamekeeper of the German Edelweiss division, a ring and a set of Nazi uniforms. The ring shows the profile of a soldier in the mountain cap, which is attached to oak leaves. At the bottom of the flower Edelweiss. And in 2014 in the same places the locals reported that they had unearthed the burial of two of the hundreds of bodies of German jaegers, which probably was covered by an avalanche many years ago.